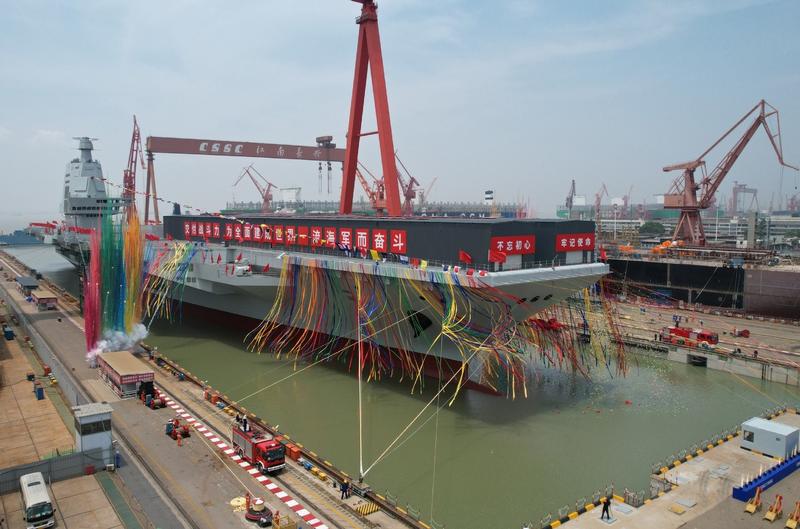 China's third aircraft carrier, the CNS Fujian, is towed out of its dry dock at China State Shipbuilding Corp's Jiangnan Shipyard Group in Shanghai at a launch ceremony on June 17, 2022. (PHOTO / XINHUA)

Among those taking part in the massive engineering endeavor, researchers at the China Academy of Launch Vehicle Technology, who are renowned specialists in carrier rockets, have used their expertise and skills to help build one of the critical parts on the colossal carrier－the jet blast deflectors.

A jet blast deflector, or blast fence, is an indispensable component on a carrier's flight deck because it is used to block and deflect extremely hot exhaust from fighter jet engines to prevent damage and injury.

Engineers from the academy's Aerospace Research Institute of Materials and Processing Technology developed heat-resistant paint used on the jet blast deflectors on the CNS Liaoning and CNS Shandong, the Fujian's two predecessors.

When design work for the new carrier began at China State Shipbuilding Corp, the institute was once again invited to participate.

Ma Kangzhi, project manager for the paint coat project at the institute, said it was an honor for his team that they could use their expertise in rockets and spacecraft to serve the country's naval modernization drive.

He said the paint coat on the jet blast deflectors must be able to withstand scorching flame and long periods of time in a marine environment.

"Our product features good heat-proofing and anticorrosive performance, can be mass-produced and is easy to maintain and repair," he said, adding that engineers will continue improving the paint formula.

The Beijing-based institute specializes in advanced materials and their processing techniques. Its technologies and products are widely used on China's crewed spaceships, carrier rockets and satellites.

China's third aircraft carrier, the Fujian was unveiled on June 17 in Shanghai as it was towed out of its dry dock at China State Shipbuilding Corp's Jiangnan Shipyard.

Upon its completion, the gigantic ship will displace more than 80,000 metric tons of water, making it the largest and mightiest warship any Asian nation has ever built, and also one of the world's biggest naval vessels.

In the next phase, the carrier will undergo mooring and sea trials to comprehensively test its overall capabilities and specific equipment, the Chinese military said.