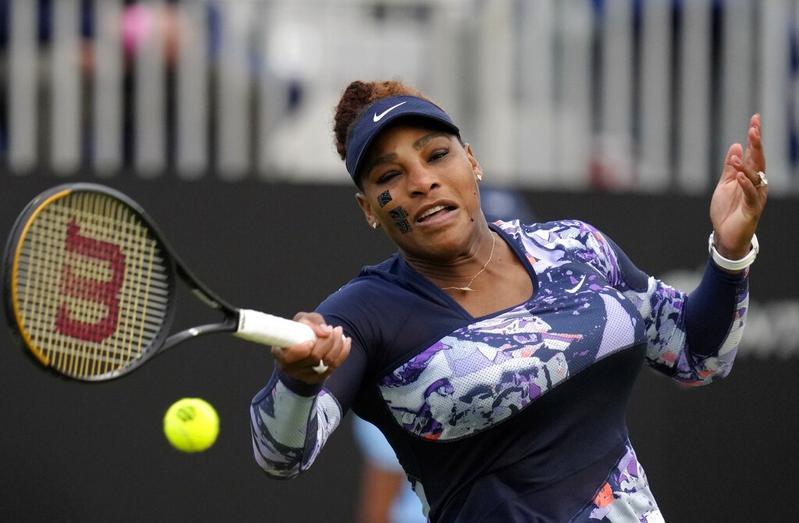 Serena Williams of the United States returns the ball during their doubles tennis match with Ons Jabeur of Tunisia against Marie Bouzkova of Czech Republic and Sara Sorribes Tormo of Spain at the Eastbourne International tennis tournament in Eastbourne, England, June 21, 2022. (KIRSTY WIGGLESWORTH / AP)

EASTBOURNE, England－Serena Williams admitted Tuesday that she feared her storied career was over after a leg injury at last year's Wimbledon forced her off tour for a year and saw her ranking plummet to 1,204 in the world.

"Did I ever doubt I would return? Absolutely, for sure. I would be dishonest if I said it wasn't (on my mind) and now my body feels great," said Williams.

The 40-year-old made a winning comeback when she teamed with Ons Jabeur to beat Sara Sorribes Tormo and Marie Bouzkova 2-6, 6-3,13-11 in the Eastbourne International doubles on Tuesday.

Williams, a 23-time Grand Slam singles champion, was playing for the first time since a tearful exit at Wimbledon last year.

Before she made the surprise announcement of her return last week, retirement rumors had swirled for several months.

But, with Wimbledon starting on Monday, she finally resumed her career, playing with Jabeur at the Wimbledon warm-up event by the Sussex seaside.

Williams and Tunisia's Jabeur, who is third in the WTA singles rankings, saw off Spain's Sorribes Tormo and Bouzkova of the Czech Republic in the last-16 match.

Although Williams was far from her vintage best, she will be encouraged by her first outing for 12 months.

However, she refused to be drawn on how long she intends to play despite Margaret Court's record of 24 Slams being tantalizingly within reach.

"You know what? I am literally taking it one day at a time. I really took my time with my hamstring injury so I am not making a ton of decisions after this.

"I did a lot of non-training in the beginning obviously and after I couldn't play New York I went cold turkey of not working out.

"It felt good but I always try to stay semi-fit because you never know when you are going to play Wimbledon.

"I love tennis and I love playing otherwise I wouldn't be here but I also love what I do off the court."

Williams has been given a wild card to play in the singles at Wimbledon, where she is a seven-time champion, as she restarts her history bid.

The last of Williams' 23 Grand Slam singles titles came when she was pregnant at the Australian Open in 2017.

Since then she has lost four Grand Slam finals, including at Wimbledon in 2018 and 2019.

Williams won the seventh and most recent of her seven Wimbledon singles titles in 2016.

After so long away, Serena soaked up the applause on Tuesday during a raucous reception from the crowd when she walked onto court in the early evening sunshine.

"I caught some fire behind me," the American said. "I needed that. It was good."

Williams' husband, Alexis Ohanian, was watching from the stands as his wife made an understandably rusty start.

Serena was appearing in a doubles competition on grass for the first time since 2016, when she won Wimbledon with her sister Venus.

The 14-time Grand Slam doubles champion was well short of peak form and Bouzkova and Sorribes Tormo twice led by a break at the start of the second set.

But Williams showed the tenacious spirit that has defined her career, striking the ball cleaner and crisper as she and Jabeur hit back to level the match at one set all.

In the third-set tiebreak, Serena squandered a match point on her serve with a wayward forehand at 9-8 and Jabeur wasted another at 10-9.

But the pair saved a match point from Bouzkova and Sorribes Tormo at 10-11, reeling off the last three points to clinch a dramatic victory in the dusk.