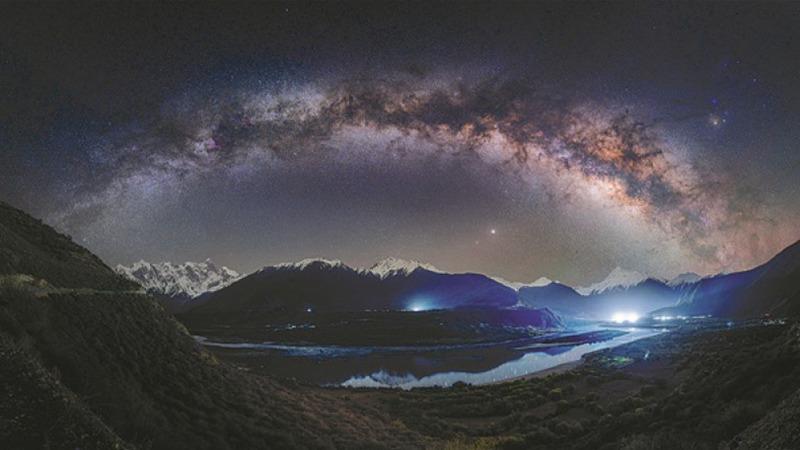 The Milky Way arches across the night sky above the Yarlung Zangbo Grand Canyon in the Tibet autonomous region. (PHOTO PROVIDED TO CHINA DAILY)

Planning of the project began last March and the observatory is scheduled for completion by June 2024. It will occupy more than 11,000 square meters in Lhasa near the region's Science and Technology Department, at an altitude of 3,650 meters.

A major advantage of the location of the new observatory is that the air in Lhasa is clean－among the best in China－which allows clear views of orbiting objects and distant celestial bodies.

A 1-meter aperture refracting telescope, the world's largest such instrument, will be installed to undertake tasks such as scientific research, provide early warnings for space junk that would endanger satellite and spacecraft launches, monitor near-Earth asteroids and help popularize astronomy.

It "will help prevent devastating accidents, such as satellites and spacecraft striking orbiting debris", said Wang Junjie, deputy director of the regional Department of Science and Technology.

The development of the telescope has involved cooperation of several institutes across China, including the National Astronomical Observatories, the Changchun Institute of Optics, Fine Mechanics and Physics; the Purple Mountain Observatory of the Chinese Academy of Sciences; and the Tibet Museum of Natural Science.

Wang said many kinds of activities, including exhibitions, training sessions, experiments, lectures and movie shows will take place at the observatory, and programs will be designed to encourage youth participation.

"The observatory will become a new regional landmark, attracting tourists as well as local people," he said.

Astronomy enthusiast Tsering Lhundrub, a student at Nagchu No 3 High School in Lhasa, loved the idea.

"Tibet is known as the roof of the world. It is near to the sky. I think it's good," Tsering Lhundrub said.

"In other parts of China, people have the resources to observe space and asteroids, but in Tibet there is a gap in this field. So I am very pleased to hear that our region will soon have one," he said.

"It's important that people－especially the younger generation－have a chance to observe and explore the amazing universe."

Randy Wright contributed to this story.