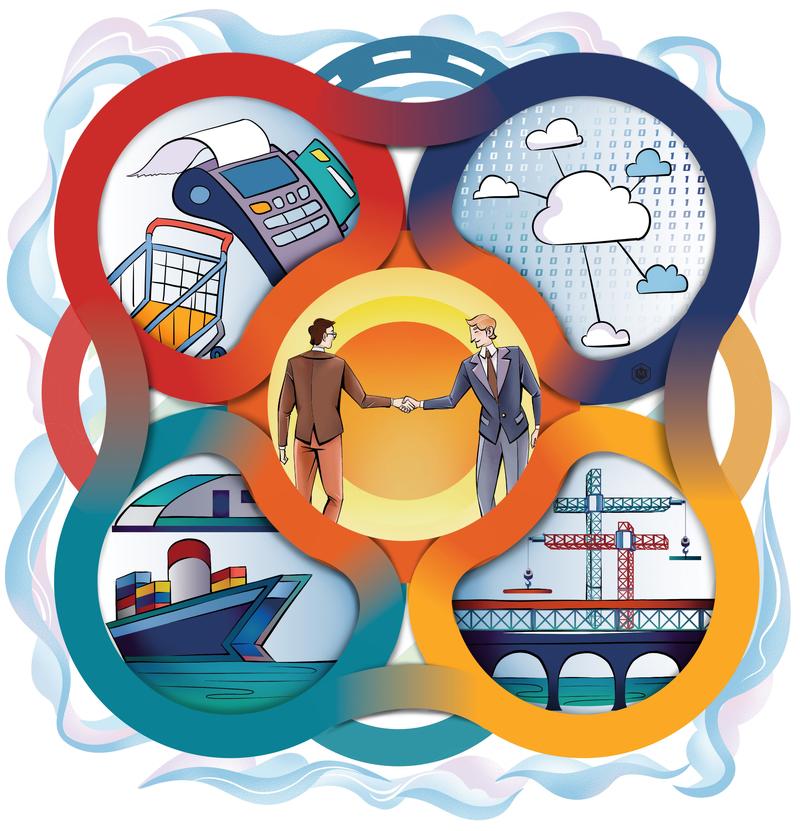 China's relentless efforts to enhance efficiency and character of its humongous domestic market through wider reforms have elicited thumbs up from both Chinese and foreign companies as they depend on the world's second-largest economy for further growth.

In April, the Communist Party of China Central Committee and the State Council, China's Cabinet, jointly released a guideline on accelerating the establishment of a unified domestic market that is highly efficient, rule-based, fair for competition and open.

The guideline includes plans covering six areas like market regulation and supervision, the submarkets of factors and resources and goods and services, and measures against unfair competition and market intervention. It is in line with President Xi Jinping's economic thoughts on building a unified, open, competitive and orderly market system, where all businesses, whether local or foreign, enjoy equal status and have equal opportunities in the marketplace.

Amid an increasingly complex external environment, Xi told a conference recently that efforts are needed to accelerate the building of a new development paradigm and advance China's high-quality development.

The guideline stated the main aim of the reform is to promote the efficient circulation and expansion of the domestic market, remove key hurdles to growth and foster a stable and predictable business environment.

It also made it clear any hurdles, including regulations or entrenched practices, to that goal will be removed through sustained efforts and imaginative policy.

Nicolas Poirot, president and CEO for the China unit of Air Liquide Group, a French industrial and medical gas supplier that runs 120 plants across China, said the country's efforts to create a unified domestic market, its sizable middle-income group and shortened negative lists will enable its economy to mitigate shocks and maintain steady growth momentum.

Building such a market is not only conducive to the formation of an efficient domestic circulation, but also necessary to enhance China's attractiveness to global companies, Poirot said.

Agreed Liu Xu, a senior research fellow at the National Strategy Institute at Tsinghua University in Beijing. "The goal is to break down current monopolies, including those in the public sector, spawned by local-level protectionism, remove improper administrative interference and nip in the bud private-sector monopolies that have been blocking the formation of an open market," Liu said.

The global economy struggling amid the COVID-19 pandemic, the changing geopolitical environment and growing trade protectionism add complexities to the supply chain and economic development of countries, Liu said.

"China already stands at the forefront of the global stage in terms of scale, but faces problems as it is perceived as 'big, but not strong'. It's a must-solve problem, given the current situation."

A group of municipalities and provinces, including Tianjin, Chongqing, Gansu, Shanxi, Hubei and Fujian, have already launched special measures to curb any abuse of administrative power.

For instance, the Liaoning Administration for Market Regulation has invested more than 1 million yuan ($148,518) over the past three years to invite relevant institutions and law firms to do third-party assessment as part of a review of fair competition systems of 14 municipal governments and 27 provincial departments.

The Tianjin Administration for Market Regulation said four types of abuse of administrative power have been identified: hindering free circulation of goods; restricting business operators from other municipalities and provinces; restricting transactions either directly or indirectly; and excluding competition.

Tang Dajie, secretary of the Chinese enterprise research institute at the Competitive Enterprise Institute, said that local protectionism is a key area that a unified domestic market strives to break down. "Local protectionism had always been hard to guard against. For example, services provided by local companies tend to be used during government procurement. Also, taxi companies preferentially purchase products from local car firms in a province.

"Many local protectionism behaviors are implicit, meaning that even policymakers don't realize that some policies may lead to a certain degree of protection for local companies."

In an infamous case relating to the bike-sharing sector in Luoyang, Henan province, the city management bureau shortlisted and authorized a firm as the official manager of bike-sharing in March 2020.

The two parties entered into a cooperation agreement that stipulated that after the expiration of the contract, if the firm bids again, under the same conditions, priority will be given to it.

This practice was later called out by the provincial market regulator of Henan for abuse of administrative power to restrict competition.

Pan Helin, co-director of the Digital Economy and Financial Innovation Research Center at Zhejiang University's International Business School, said the new guideline not only regulates the monopolistic behavior of market players, but also pays attention to local protectionism, access barriers, and local governments' recruitment and procurement system, which will greatly contribute to the creation of a fair market environment.

He said some of the rules stated in the guideline will help prevent unfair practices as they are more "detailed" than expected.

For instance, the guideline mentioned that local governments should establish a list of preferential policies related to enterprises and disclose them to the public in a timely manner.

Also, local governments should promote the digitalization of the whole process of bidding and promote bid evaluation experts and other resources to be shared across regions and industries.

Data monopoly will be preempted as the country will work to develop a unified domestic market of productivity factors and resources, including data, land, labor, capital, technology, energy and the environment.

It emphasized the country will prevent platform enterprises from utilizing data, algorithms and other technical means to hinder competition and further crack down on unfair competition in relatively new business formats like platforms and sharing economy.

Yi Tong, a senior researcher at the Beijing Academy of Science and Technology, said: "It's especially important when China is accelerating informatization and calling for continuous breakthroughs in technologies such as chips and operating systems. Without proper data flows, companies cannot foster further technological innovations."

Currently, most of the leading companies or platforms, especially from the internet sector, have cultivated a massive chunk of users and enjoy a sort of monopoly in data collection and use. There are no clear rules on data circulation, and the existing laws are not enough for proper utilization of data and curbing monopolies, she said.

The China Academy of Information and Communications Technology published a report last year that there are more than 3.5 million mobile apps in the Chinese market. These have been distributed or downloaded via third-party app stores in China more than 1.4 trillion times, indicating why data security is of significance, more so because of the digital economy's gathering momentum through deep penetration into various industries and from the economic recovery.

Yi said, "A flexible policy to curb data monopoly will help China to gain an edge in global competitiveness, especially as economies like the United States and Europe have already started to leverage their data."

Poirot of Air Liquide Group said China has been one of the group's top three markets for a number of years and it continues to gain in significance, not least because of the prospects that the unified domestic market presents. So, Air Liquide will continue to increase investment in hydrogen energy, production centers for basic electronic material, low-carbon technology applications, high-end manufacturing and research activities in China during the 14th Five-Year Plan period (2021-25).