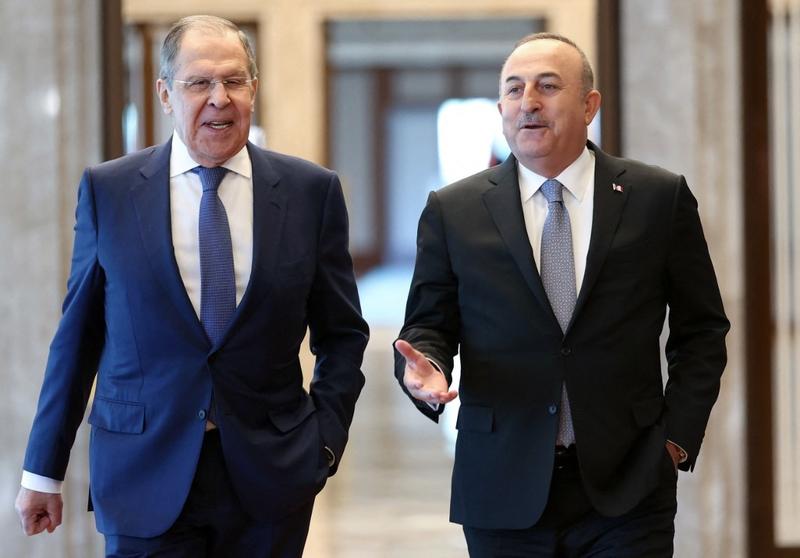 ANKARA - Turkey's foreign minister said on Wednesday a United Nations plan to restart Ukrainian grain exports along a sea corridor was "reasonable" and requires more talks with Moscow and Kyiv to ensure ships would be safe.

Speaking alongside Russian Foreign Minister Sergei Lavrov, Turkey's Mevlut Cavusoglu said their meeting in Ankara was fruitful, including a perceived will to return to negotiations between the two sides for a possible ceasefire.

Speaking alongside Russian Foreign Minister Sergei Lavrov, Turkey's Mevlut Cavusoglu said their meeting in Ankara was fruitful, including a perceived will to return to negotiations between the two sides for a possible ceasefire

The Russia-Ukraine conflict that started in February halted Kyiv's Black Sea grain exports, threatening a global food crisis. The UN appealed to the two sides, as well as maritime neighbor and NATO member Turkey, to agree a corridor.

Any deal could involve a Turkish naval escort for tankers leaving Odesa and other Ukrainian ports - which are currently blockaded by Russia's navy - and onward to Turkey's straits and global markets.

"Various ideas have been put out for the export of Ukrainian grains to the market and most recently is the UN plan (including) a mechanism that can be created between the UN, Ukraine, Russia and Turkey," Cavusoglu said.

"We see it as reasonable," he added. "Of course both Ukraine and Russia must accept it."

Lavrov said Ukraine needs to let merchant vessels leave its ports safely in order to reach an agreement on the commodities corridor.

Turkey, which has good relations with both Kyiv and Moscow, had previously said it is ready to take on a role within an "observation mechanism" if a deal is reached.

The Russian and Turkish defense ministers discussed the potential grain exports corridor on Tuesday, and a senior Turkish official had said Ankara expected progress at the Lavrov meeting. After the crisis began, Turkey had been working to mediate a ceasefire but talks have faded.