European Central Bank President Christine Lagarde is seen prior to a meeting of eurogroup finance ministers at the European Council building in Brussels on May 23, 2022. (OLIVIER MATTHYS / AP PHOTO)

Editor's note: More than 100 days into Russia's special military operation, China Daily presents two pages of special coverage on the milestone, which fell on Friday. From surging inflation and setbacks to green-energy goals to the plight of refugees, the impact of the conflict is examined.

Economists are warning that surging inflation in Europe and beyond threatens to force millions into debt and destitution in a bleak view that contrasts with the enormous profits posted by companies in the food and energy sectors.

Inflation in the eurozone reached 8.1 percent in May, up from 7.4 percent in April, according to data from the European Commission's statistics office published on Tuesday, reaching a record high for a seventh consecutive month.

As central banks and finance departments attempt to navigate these economic challenges to stave off recession, the real-world situation for low-income households is even worse than the official figures suggest.

The Russia-Ukraine conflict has caused major disruptions to grain and gas exports, sending food and energy bills skyrocketing, and the London-based Institute for Fiscal Studies, or IFS, warns that low earners are disproportionately affected.

In terms of income, the bottom 10 percent of British households spend 11 percent of their earnings on gas and electricity, which is almost three times more than the highest tenth. In the UK, prices for several food staples including rice, bread, and beef mince all increased by more than 10 percent in April compared with the same month last year, according to the Office for National Statistics, and the price of pasta has risen by 50 percent over the period.

The Bank of England projects that inflation will reach 10 percent in the UK in October, and the IFS analysis suggests that this translates to a 14 percent inflation rate for the poorest households in the UK, compared with 8 percent for the richest.

A separate analysis by the London-based National Institute of Economic and Social Research, or NIESR, predicts that rising inflation means 1.5 million UK households will face food and energy bills that consume all disposable income throughout the next two years, and an extra 250,000 British households will fall into extreme poverty, taking the total number to 1.2 million.
READ MORE: Passing the buck on inflation

In a policy U-turn, UK Chancellor of the Exchequer Rishi Sunak last week announced a 15-billion-pound ($18.9 billion) emergency package, including a 5-billion-pound temporary windfall tax on energy companies, in order to ease some of the burdens on struggling households.

The NIESR forecasts that annual consumer price inflation will peak in the fourth quarter of 2022 and remain above target through 2023.

"Persistently high inflation and a forecast shallow recession at the end of 2022 mean the Bank of England continues to sail in treacherous seas with a risk of potentially deepening the recession if rates are hiked rigorously," said Urvish Patel, an associate economist at the NIESR.

In a report published last week, the global poverty charity Oxfam drew a stark contrast between the prospects of the haves and have-nots over the pandemic period.

Oxfam found that the wealth of the world's billionaires rose more in the first 24 months of COVID-19 than in the previous 23 years combined, and billionaires in the food and energy sectors are increasing their fortunes by $1 billion every two days. In contrast, the charity predicts that inflation will plunge 263 million more people into extreme poverty this year.
ALSO READ: UNDP: Ukraine crisis could further stall Africa's development 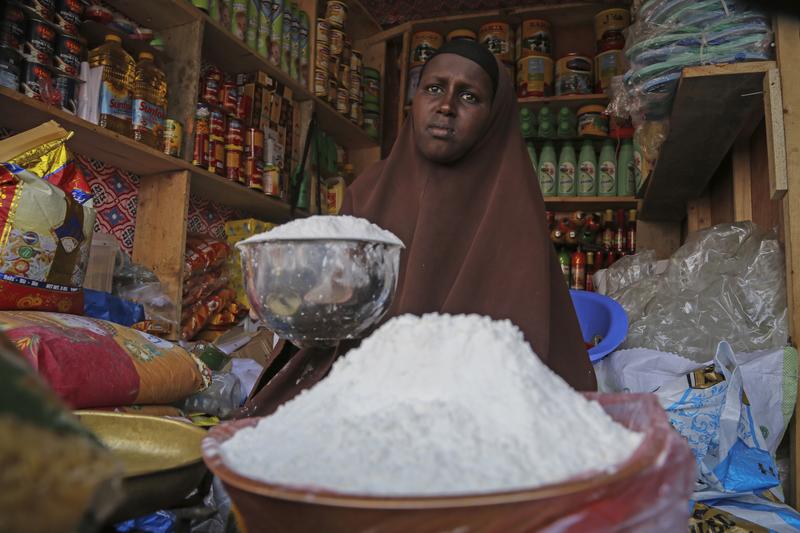 A shopkeeper sells wheat flour in the Hamar-Weyne market in the capital Mogadishu, Somalia on May 26, 2022. Families across Africa are paying about 45 percent more for wheat flour as the Ukraine conflict blocks exports from the Black Sea. Some countries like Somalia get more than 90% of their wheat from Russia and Ukraine. That is forcing many people to substitute wheat for other grains. But the United Nations is warning that the price hikes are coming as many parts of Africa are facing drought and hunger. (FARAH ABDI WARSAMEH / AP PHOTO)

Gabriela Bucher, executive director of Oxfam, said millions of people are "skipping meals, turning off the heating, falling behind on bills and wondering what they can possibly do next to survive".

"This grotesque inequality is breaking the bonds that hold us together as humanity. It is divisive, corrosive and dangerous," said Bucher. "This is inequality that literally kills."

Food prices have risen an estimated 37 percent year-on-year, according to the World Bank, leaving the world on the brink of a nutrition and food security crisis

Food prices have risen an estimated 37 percent year-on-year, according to the World Bank, leaving the world on the brink of a nutrition and food security crisis.

In early April, International Monetary Fund Chief Economist Pierre-Olivier Gourinchas warned that inflation and food insecurity will lead to "supply disruptions … and social unrest", and this is now beginning to play out in several countries including Peru and Sri Lanka where food shortages and the rising cost of basic goods have led to societal upheaval.

Christine Lagarde, president of the European Central Bank, has put the rampant rise in inflation down to three main factors. First, rising gas and fertilizer prices, exacerbated by the Russia-Ukraine conflict, have led to surging energy and food prices. Second, Europe has faced shocks to both demand and supply that have led to record-high industrial goods inflation.

Last, Lagarde said Europe has experienced the shock from economies reopening after lockdowns, which has triggered a rapid rotation of demand back to services, especially in tourism and hospitality businesses, which have struggled to find staff quickly enough to meet rising demand, leading to rising services inflation.

The conflict "may well prove to be a tipping point for hyper-globalization, causing geopolitics to become more important for the structure of global supply chains", Lagarde said in a statement. "That could lead to supply chains becoming less efficient for a while and, during the transition, create more persistent cost pressures for the economy."

Lagarde also added that the conflict in Europe is set to reshape demand and prices for select commodities. Some advanced economies, including the UK and the United States, have sought to double down on domestic fossil fuel exploration in response to rising gas prices. Others have looked to accelerate the switch to renewables, including Germany, which recently announced plans to raise a 2030 target for renewable power from 65 percent to 80 percent of the national energy mix.

The conflict "is likely to speed up the green transition as a means of reducing dependence on unfriendly actors", Lagarde said.

"Indeed, green technologies are set to account for the lion's share of the growth in demand for most metals and minerals in the foreseeable future. The faster and more urgent the shift to a greener economy becomes, the more expensive it may be in the short run."
READ MORE: Hong Kong stocks end lower on Ukraine crisis, inflation worries