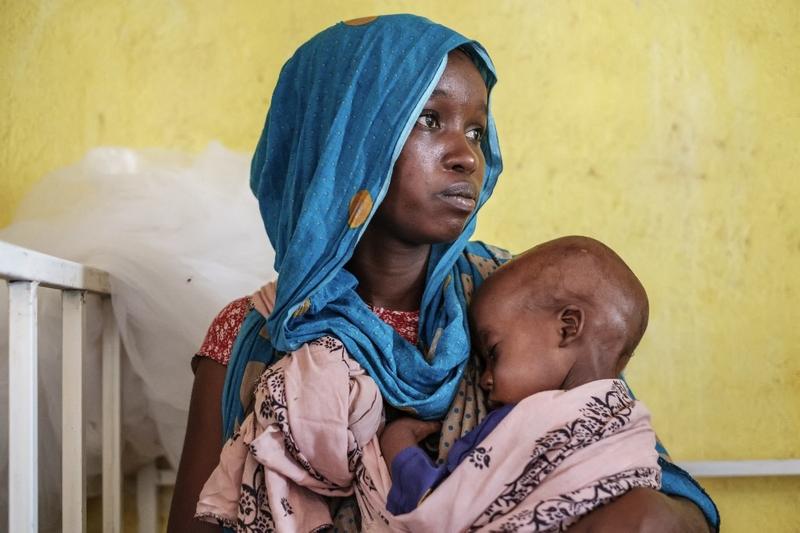 A woman holds a malnourished child at the nutrition unit of the Kelafo Health Center in the town of Kelafo, 120 kilometers from the city of Gode, Ethiopia, on April 7, 2022. (EDUARDO SOTERAS / AFP)

JOHANNESBURG - Africa risks sliding into stagflation - a cycle of slow growth and high inflation - as it battles the lingering effects of the pandemic and rising fuel and food prices caused by the Russia-Ukraine conflict, the African Development Bank (AfDB) said on Wednesday.

While 2021 saw a continent-wide rebound, with gross domestic product (GDP) growth estimated at 6.9 percent after a pandemic-induced contraction of 1.6 percent the previous year, the Bank projects real GDP growth to slow to 4.1 percent this year.

"The deceleration in growth highlights the severity of the impact of the Russia–Ukraine conflict on Africa's economy," the AfDB wrote in its 2022 African Economic Outlook.

"If the conflict persists, Africa's growth is likely to stagnate at around 4 percent in 2023."

Inflation is meanwhile expected to accelerate to 13.5 percent this year, from 13 percent in 2021, due to a sharp rise in energy and food prices linked to the crisis in Ukraine.

The AfDB estimates around 30 million Africans were pushed into extreme poverty and 22 million lost their jobs last year alone as a result of the pandemic.

Vulnerable populations, particularly in urban areas, will bear the brunt of rising prices, the report said, adding that economic disruptions stemming from the war could tip nearly 4 million more into extreme poverty this year and next.

"In the absence of measures to cushion the impact, this could stoke social tension across the continent," the report stated. "But in many African countries, fiscal space remains constrained by the effects of the pandemic.

The AfDB forecasts Africa's debt-to-GDP ratio to stabilize at around 70 percent, down slightly from 71.4 percent in 2020, due to last year's growth recovery and debt relief measures, but will remain above pre-pandemic levels.