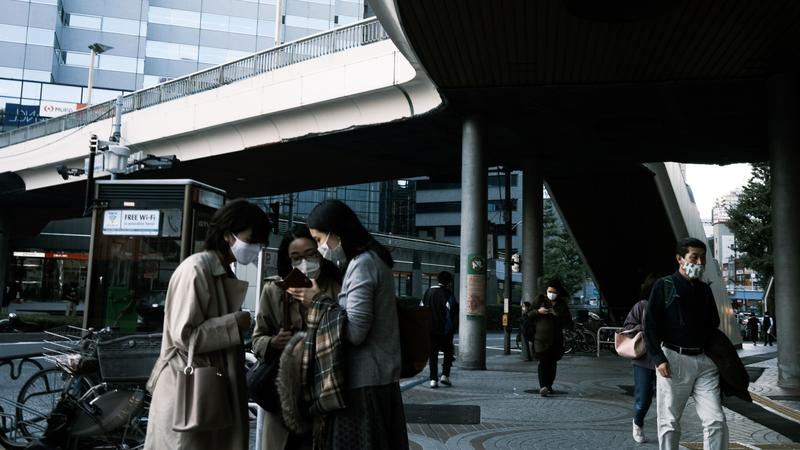 Pedestrians wearing protective masks stand under a footbridge in the Shinjuku district of Tokyo, Japan, on Nov 19, 2020. (SOICHIRO KORIYAMA/BLOOMBERG)

TOKYO - Japan's factories posted a sharp fall in output in April as wider supply disruptions took a heavy toll on manufacturers, clouding the outlook for the trade-reliant economy.

Separate data showed Japan's retail sales grew 2.9 percent in April from a year earlier, marking their sharpest gain since May 2021

Factory output dropped 1.3 percent in April from the previous month, official data showed on Tuesday, on sharp falls in the production of items such as electronic parts and production machinery.

It was the first fall in three months and much weaker than a 0.2 percent decline expected by economists in a Reuters poll.

The data comes a day after Toyota Motor Corp, the world's largest automaker by sales, missed its global production target for April after output fell more than 9 percent year-on-year.

Toyota's output slump last month came after the Japanese carmaker on Friday cut its global production plan for June and signaled the possibility of lowering its full-year output plan of 9.7 million vehicles.

"Japan's production is likely to keep stalling in the short term as disruptions in the global supply chain continue," said Kazuma Kishikawa, economist at Daiwa Institute of Research.

"Logistics won't be restored in a day," he added.

While activity in Japan's services sector is picking up as the pandemic subsides, the country's manufacturing sector has been pressured by supply disruptions and higher material prices caused by Russia-Ukraine conflict.

"The soft activity data for April suggest that the Q2 rebound may disappoint, though it's worth noting that they don't tell us anything about the recovery in the service sector," wrote Tom Learmouth, Japan economist at Capital Economics, in a note.

Manufacturers surveyed by the Ministry of Economy, Trade and Industry expected output to return to growth in May, gaining 4.8 percent, followed by a 8.9 percent advance in June.

While output would be on course for a strong rebound this quarter if those forecasts are realized, firms' production plans have been far more overly optimistic than usual since supply shortages started to take a toll, Learmouth added.

ALSO READ: The brutal truth about Japan and the US

Separate data showed retail sales grew 2.9 percent in April from a year earlier, marking their sharpest gain since May 2021. That was bigger than the median market forecast for a 2.6 percent rise.

The jobless rate stood at a more than two-year low of 2.5 percent in April from the previous month's 2.6 percent.