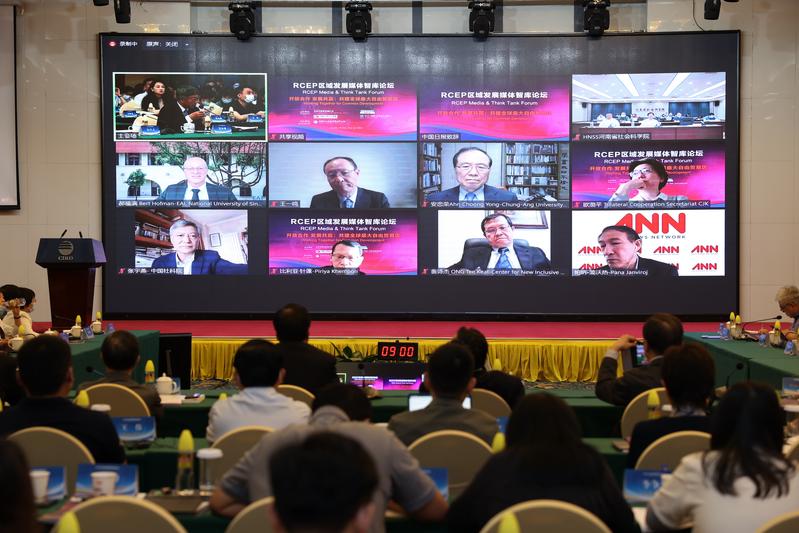 Guests and speakers attend, some of them virtually, the RCEP Media& Think Tank Forum in Haikou, Hainan province, on Sunday. (LIANG DINGSUO / FOR CHINA DAILY)

To that end, joint efforts are required from all RCEP members to deepen cooperation and seek common development with a firm resolve to uphold globalization, they said.

They made the remarks at the RCEP Media & Think Tank Forum, whose theme was "working together for common development".

The event was jointly organized by the Publicity Department of the Communist Party of China Hainan Provincial Committee, China Daily, the Chinese People's Institute of Foreign Affairs and the Hainan-based China Institute for Reform and Development.

"Working together for common development" is the right and wise call and corresponds to these uncertain, worrisome times for Asia, said Keo Puth Rasmey, former deputy prime minister of Cambodia, who added that the call for working together is no doubt even more necessary now. 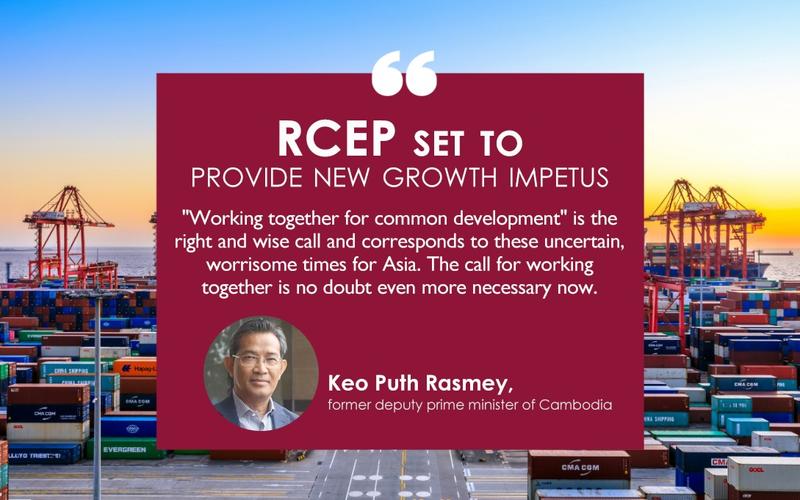 Qu Yingpu, publisher and editor-in-chief of China Daily, said that world peace and development are facing serious challenges arising from both the pandemic and changes unseen in a century.

"We must always abide with the right course of history and remain vigilant on anti-globalization sentiments and behaviors and oppose them, to safeguard economic globalization, deepen interconnectivity and jointly build an open world economy," he said. 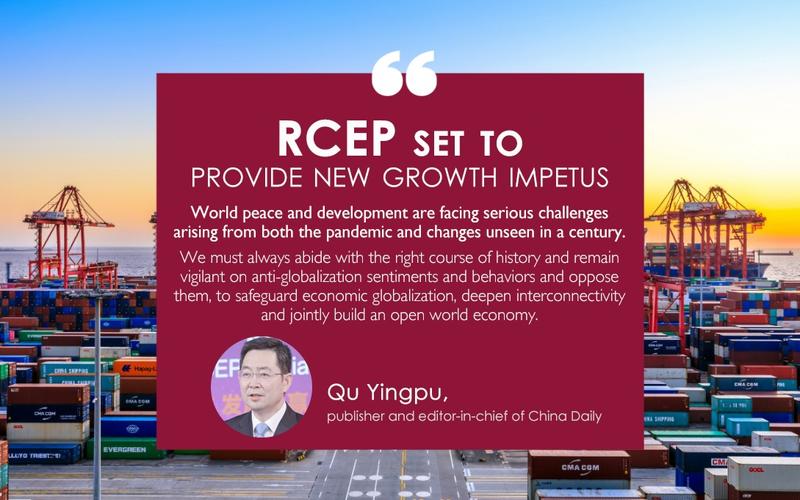 The RCEP economies should increase openness and deepen cooperation to enhance regional integration, promote high-quality economic development with the principle of mutual benefit and a win-win approach, and strengthen people-to-people bonds to actively create a good environment for common development, according to Qu.

According to Wang Yiming, vice-chairman of the China Center for International Economic Exchanges, the agreement is a successful example of open regionalism, as it unprecedentedly groups economies with different development levels and industrial structures into an integrated economic community.

Aiming to facilitate and liberalize trade and investment, the RCEP eliminates more than 90 percent of tariffs on goods traded in the region over a period of 20 years.

In comparison, the recently launched "Indo-Pacific Economic Framework", which has been joined by 11 RCEP members, has no content on the much-anticipated tariff reduction and market access to the United States, and all rules and standards are dictated by the US, according to Ong Tee Keat, chairman of the Center for New Inclusive Asia in Malaysia. 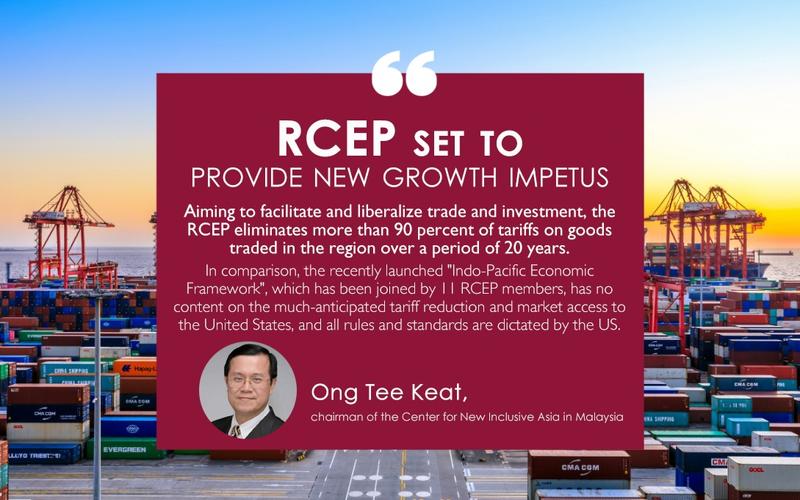 Chi Fulin, president of the China Institute for Reform and Development, said the RCEP is not only conducive to the full play of the advantages of traditional developed countries, but also enables underdeveloped countries to optimize their resource allocation, which will further unleash RCEP members' economic dynamism and promote steady economic growth in the region. 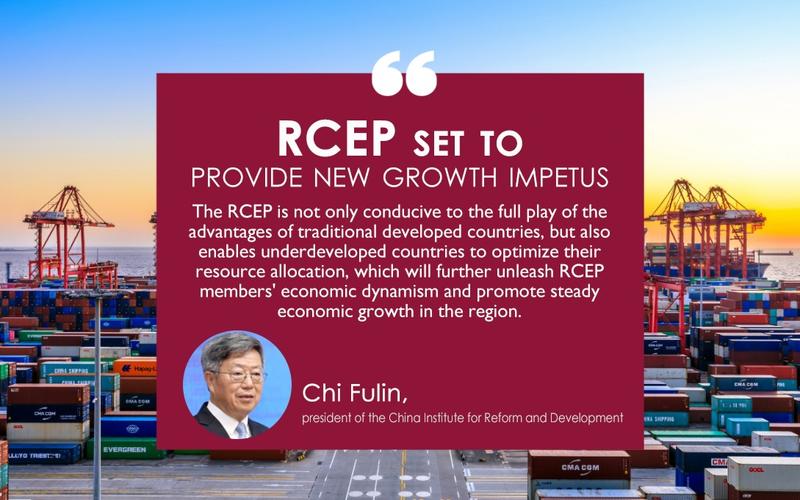 The implementation of the RCEP is a milestone for Asia-Pacific economies in opposing anti-globalization and jointly building a unified regional market, said Li Jie, vice-president of the Chinese People's Institute of Foreign Affairs.

It is also an important measure for advancing global trade and for liberalizing and facilitating investment, as well as a major victory for multilateralism and free trade, Li added. 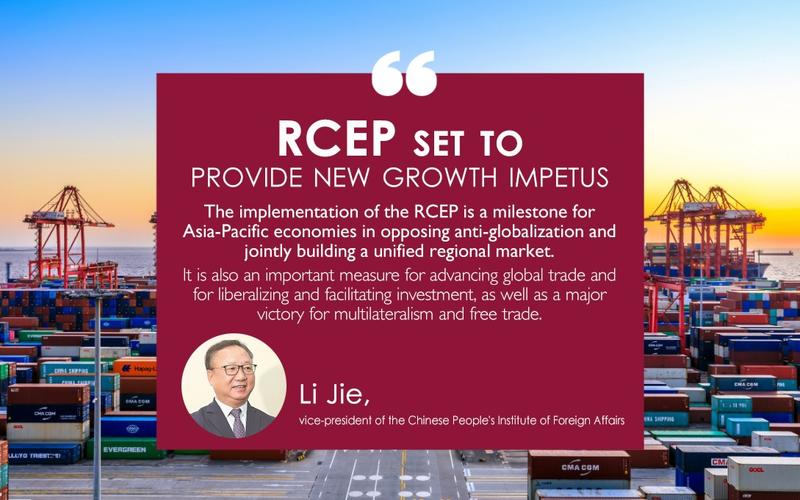 Wang Bin, head of the Publicity Department of the CPC Hainan Provincial Committee, said the province will grasp the opportunities presented by the RCEP's implementation to better engage in China's dual-circulation development－in which the domestic market is the mainstay and the domestic and foreign markets reinforce each other－and to improve resource allocation and enhance opening-up.