Hong Kong is better poised to boost its economy, enhance competitiveness and address urgent livelihood issues as the “one country, two systems” policy has entered a new phase, officials said on Friday at a high-level legal forum.

The forum, centering on the importance of the Basic Law and “one country, two systems” for Hong Kong, is one in a series of legal forums being held by the city’s Department of Justice to mark the 25th anniversary of Hong Kong’s return to the motherland.

Since its establishment, the Hong Kong Special Administrative Region has experienced turbulent times, yet with the full support of the central government and the unique advantage of “one country, two systems”, it has maintained long-term prosperity and stability, and achieved remarkable results, Chief Executive Carrie Lam Cheng Yuet-ngor said at the event.

The HKSAR has maintained long-term prosperity and stability since its establishment thanks to central government support and advantage of “one country, two systems”, said Carrie Lam

Lam told the forum attendees that “one country” is always the foundation of “two systems”, and also the foremost requisition for Hong Kong to fully leverage the strength of “two systems”.

Lam said that in the last five years, Hong Kong experienced the gravest challenges since the handover, when national security faced severe threats. She added that the lessons learned during the social unrest in 2019 showed that deviating from the original intention of “one country, two systems” would bring disastrous consequences to Hong Kong.

Wang Linggui, deputy director of the Hong Kong and Macao Affairs Office of the State Council, said at the same event that a series of achievements in Hong Kong have proved that “one country, two systems” is the best solution and institutional arrangement for dealing with the issues of Hong Kong and Macao, and is workable, feasible, and widely supported. 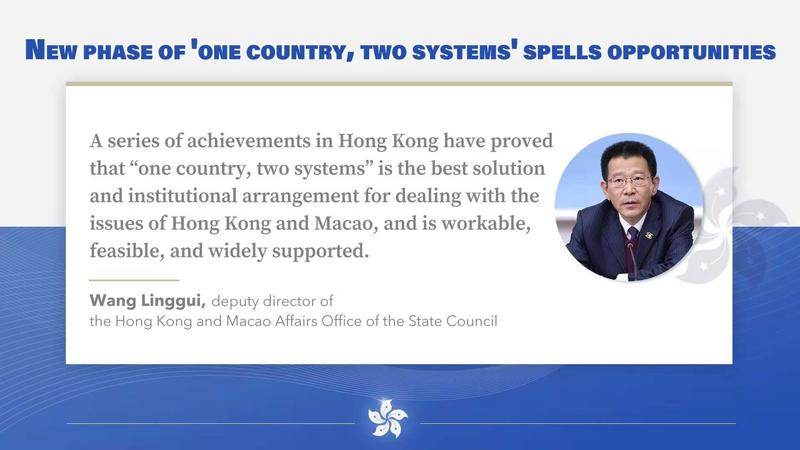 Wang stressed that with the implementation of the National Security Law for Hong Kong and the improvements in the electoral system, “one country, two systems” has kicked off a new stage in Hong Kong.

Also speaking at the full-day forum was Chen Dong, deputy director of the Liaison Office of the Central People’s Government in the HKSAR. Chen said that to fully and accurately implement the Basic Law, Hong Kong must firmly adhere to the “one country” principle and give full play to the advantages of the “two systems”.

READ MORE: HK’s assured future beyond 2047 a fillip for everybody