By May Zhou in Houston 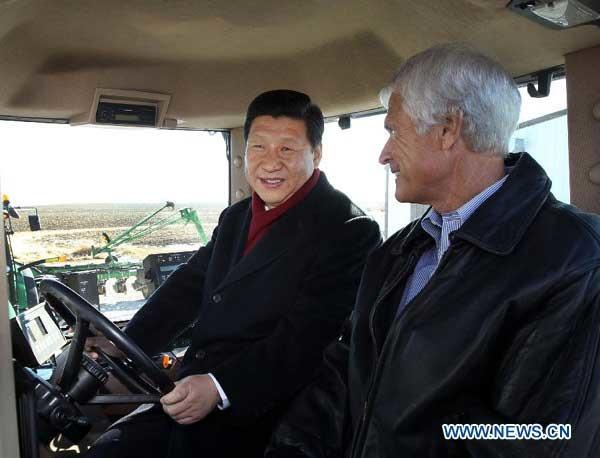 Then Chinese Vice-President Xi Jinping (left) talks with farmer Rick Kimberley as they sit in the cab of a tractor in Des Moines, Iowa, Feb 16, 2012 file photo. (PHOTO / XINHUA)

Iowans ranging from a former governor and ambassadors to local farmers fondly recall Chinese President Xi Jinping's two visits to the Midwestern state. The connection forged over the years made quite a few Iowans "old friends" of Xi, as he calls them.

Terry Branstad, former United States ambassador to China, was governor of Iowa when Xi first visited in 1985 and again in 2012.

At a high-level US-China agricultural dialogue held online recently, Branstad recounted his interactions with Xi over the years.

When he first became governor, Branstad signed a sister state-province agreement with Hebei province in 1983 and brought a 50-person delegation to Shijiazhuang, the capital of Hebei, the next year.

"So then in the spring, 1985, a delegation of five young men, led by a county-level Party secretary named Xi Jinping, came to Iowa. We wanted to treat them as we were treated in Hebei. So we went all out," Branstad recalled. The delegation was taken to a birthday party, got a taste of barbecue and visited the Mississippi River, as Branstad recalled.

What's more, upon Xi's request to experience ordinary life in the US, it was arranged for him to spend two nights at a Muscatine resident's house.

Through the arrangement by Sarah Lande, then president of the Iowa Sister State Friendship Committee, Xi slept in Gary Dvorchak's Star Trek-themed bedroom while the latter was away at college.

Xi also dined at Lande's house and saw her go to a neighbor's house to get some ingredients to make a meal.

Years later, Lande described her impression of Xi as a man "who was bright, curious, well-mannered, fun and friendly, who had a smile that transcended into lasting friendship. He was curious … to learn everything that was new when his visit came in Iowa."

The two-week visit was so memorable to Xi that when Branstad visited China in 2011, Xi received him in the Great Hall of the People.

"He had an itinerary from 1985. He went on and on and called us old friends and mentioned all the people," Branstad said. "I think we did make a very good impression."

In February 2012, Branstad met Xi when he visited the US as China's vice-president.

"We went into the archives and found a picture of him and his delegation with me behind my desk on April 29, 1985," Branstad said. "I autographed it and gave it to him and said, 'Now, would you autograph one for me?' And he did."

Xi visited Muscatine to enjoy a reunion with his friends from more than 20 years before. Xi told them: "My impression of America came from you. To me, you are America."

Xi also visited a local farm where he visited a farmer's house and tried his hand on a tractor.

"The day of the visit started very early. A lot of security and media arrived early before Vice-President Xi. That ramped up the anticipation and the nerves," Kimberley recalled.

Once Xi arrived, Kimberley felt more at ease and relaxed. "It put me at ease because he had smiles on him. A warm greeting by him kind of helped with the nerves. I could tell he wanted to be there, wanted the discussion. It's almost like a friend at that time," Kimberley said. "We discussed very important issues of the day, specifically on agriculture."

The home and farm visit lasted about an hour, and Kimberley said he was impressed by Xi's knowledge of agriculture. "The questions he asked about agriculture, I knew he knew quite a bit about it."

The visit put Kimberley on a path to promote agricultural exchanges between the US and China. By his own account, Kimberley has visited China about 20 times since Xi's visit to his farm. He is involved in a major project to build a Kimberley Farm model in Hebei to help China farm more efficiently.

During Xi's second visit to Iowa, then governor Branstad hosted a state dinner in honor of Xi.

Kenneth Quinn, former president of the World Food Prize Foundation and former US ambassador to Cambodia, was especially touched by one particular remark made by Xi at the dinner.

"He quoted Mark Twain, who wrote about 19th-century life along the Mississippi River and American Midwest. He spoke about how the memories of seeing the sun over the Mississippi River were so deeply ingrained within him," Quinn said. "I could not recall ever hearing a foreign leader speak so movingly about my country. That brought home to me the power of citizen diplomacy."

The next day, while escorting Xi to the agricultural symposium there, Quinn told Xi that he might be one of the few Iowans who shook Xi's hand as well as Xi's father's hand, when Xi Zhongxun went to Iowa in 1980.

"The vice-president literally stopped in his tracks; his eyes got very big, a big smile on his face, and he said to me, 'You have two very interesting stories,'" Quinn said.

Xi Zhongxun visited Iowa in 1980 as the governor of Guangdong province, while Quinn, as a Pearson fellow at the US State Department, was tasked to escort the senior Xi around Iowa.

To this day, Quinn said he believes that the senior Xi's visit to the Amana Colonies, a former communal living structure, might have helped China's leaders push for agricultural reform in China, which dramatically increased China's food production.

Later, Quinn commissioned a local artist to do a painting about Xi's and his father's visits to Iowa with the president's words as the title Two Interesting Stories. It now hangs at the World Food Prize Hall of Fame.

Quinn said the bonds forged between Xi and Iowans prove that the US and China, which have quite different philosophies of governance, could have a genuinely friendly relationship. "There could be this experience that would be so meaningful that it could override some of the other irritants in the relationship," Quinn said.