By Zheng Caixiong and Li Wenfang in Guangzhou 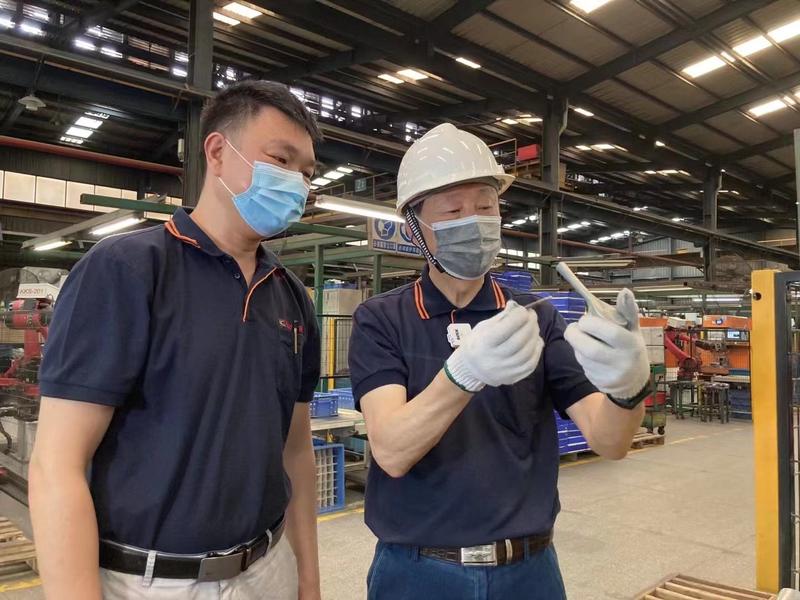 Curtis Shih (right) talks with a colleague at one of Sunspring Industry's factories in the Dawang Comprehensive Economic Development Zone in Zhaoqing city, Guangdong province. (PHOTO PROVIDED TO CHINA DAILY)

There was a sugar refinery operating in the zone, which had previously been a State farm, said the 67-year-old business representative from Taiwan.

Few outside investors had come to set up factories in the area due to its less-developed infrastructure at the time.

"But I found a plethora of business opportunities and saw broad prospects for development," Shih said in a telephone interview.

He quickly set up a metal manufacturing plant, the first Taiwan-funded company in Dawang, that year. His company, Sunspring Industry, manufactures high-quality products such as kitchen and bathroom accessories, auto parts and door handles.

Shih, who is general manager, received the May 1 Labor Medal of Guangdong this year for his positive contributions to boosting economic and cultural exchange and cooperation between Guangdong and Taiwan, and to promoting peaceful, integrated development across the Taiwan Straits.

He was awarded the prize in Guangzhou on April 28 and said he felt honored, as few investors from Taiwan have received such acclaim.

Shih sent photos of the medal to his sister in Shanghai and said that his family is happy for him.

"The award shows that my work has been recognized on the mainland, and I hope more business representatives from Taiwan can win the honor and shoulder the responsibility that companies must bear in the years to come," he said.

Looking back after 25 years, Shih said he believed he made the right decision to start his company in Dawang.

After Sunspring was established, several Taiwan companies began to arrive and set up production facilities in the area over the next few years.

Shih praised the great economic achievements the Chinese mainland has made over the years. 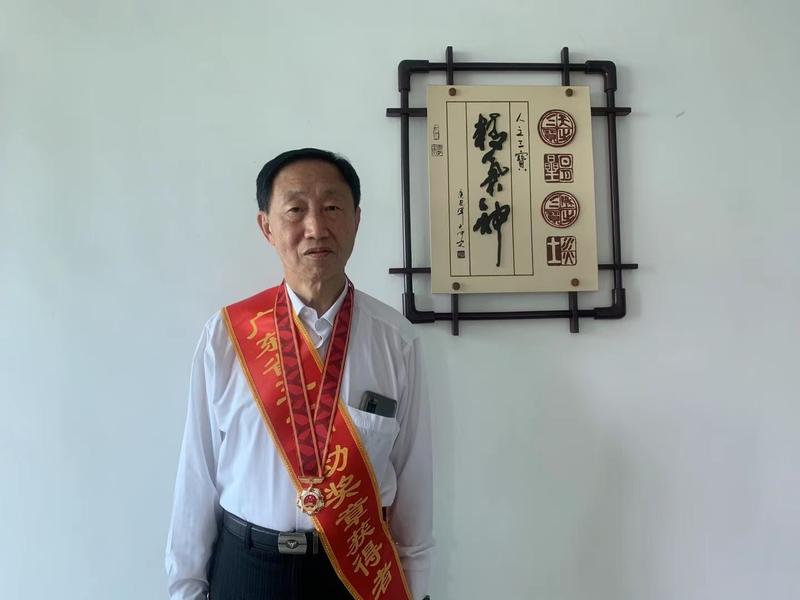 Shih poses with the May 1 Labor Medal of Guangdong province at his office. (PHOTO PROVIDED TO CHINA DAILY)

"In 25 years, the development of Zhaoqing has surprised me a lot," he said. "Many modern factories have now been built in Dawang, and many of the former sugar cane fields have become modern urban areas full of high-rise buildings."

Dawang has become a high-tech development zone and plays a big role in promoting the economic development of Zhaoqing and Guangdong as a whole.

Meanwhile, Shih's company has become one of the major metal manufacturing plants in the city, with more than 70 percent of its products sold to Southeast Asia, Europe, the United States and Japan.

Production at the company, which has more than 1,800 employees, enjoyed year-on-year growth of 36 percent last year, said Shih, who is also executive vice-president of the Zhaoqing City Taiwan Compatriots Investment Enterprise Association.

The company expects its output this year to remain steady, despite the COVID-19 epidemic, an increase in the prices of raw materials, exchange rate fluctuations, global inflation and the conflict in Ukraine.

At its peak, Sunspring had more than 4,000 employees. The reduction in staff was the result of improvements to automation and efficiency.

Shih treats his employees like family, and many regard him not only as the company's general manager, but also as a father-figure.

In addition to teaching new employees how to run production lines, he frequently visits dormitories to chat with his staff to understand what they need and help them solve problems both at work and in life.

Last year, he spent 1 million yuan ($155,000) on renovations to the company's toilets after he received complaints that facilities were poor and then set up a complaint box and encouraged employees to use it.

Before the epidemic, Shih organized sports and talent competitions and said he pays great attention to team building and family relationships. He said he is concerned about the lives of the children of his employees, most of whom are migrant workers who have had to leave their young ones behind.

He has urged employees to communicate more with their children and learn to better balance work and family life.

When the children are on winter and summer holidays, Shih encourages his workers to bring their children to Dawang and help the children better understand their work, he said.

"Now, many of the children have become second-generation employees, working alongside their parents," he said.

Shih hopes that more young people from Taiwan come to the mainland to understand its development and take advantage of business opportunities.

Fan Chengjun, assistant manager at Sunspring, said that Shih provides staff with career development opportunities to bolster their sense of worth.

"By caring about the work and lives of his employees, Shih helps them make life and career plans, and even gives them interest-free loans to help them purchase apartments to live with their families," said Fan, who has been with the company since 1998.

"There are still about 100 employees who have been working here since 1998, and the second generation are now working alongside their parents."

Fan said his boss deserved to win the May 1 Labor Medal. "Shih is patriotic and agrees that both sides of the Taiwan Straits are members of one big family," he added.