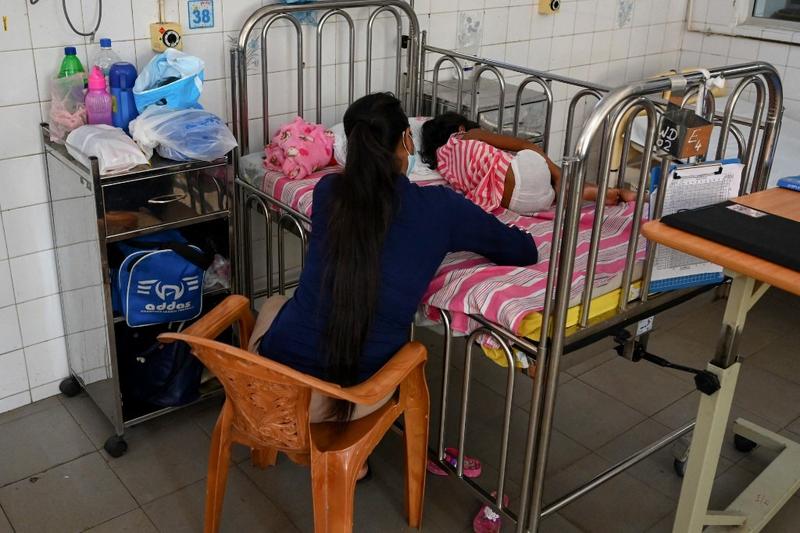 In this picture taken on April 21, 2022, a child lies in a bed while her mother sits beside in Lady Ridgeway Hospital for Children in Colombo. (ISHARA S. KODIKARA / AFP)

COLOMBO - A shortage of medicine caused by an economic crisis in Sri Lanka could soon cause deaths, doctors said, as hospitals are forced to postpone life-saving procedures for their patients because they do not have the necessary drugs.

Sri Lanka imports more than 80 percent of its medical supplies but with foreign currency reserves running out because of the crisis, essential medications are disappearing from shelves and the healthcare system is close to collapse.

At the 950-bed Apeksha cancer hospital on the outskirts of the commercial capital, Colombo, patients, their loved ones and doctors feel increasingly helpless in the face of the shortages which are forcing the suspension of tests and postponement of procedures including critical surgery.

Saman Rathnayake, a Sri Lankan government official working on procuring medical supplies, said about 180 items were running out, including injections for dialysis patients, medicine for patients who have undergone transplants and certain cancer drugs

"Sometimes, in the morning we plan for some surgeries (but) we may not be able to do on that particular day ... as (supplies) are not there."

If the situation does not improve quickly, several patients would be facing a virtual death sentence, he said.

Sri Lanka is grappling with its most devastating economic crisis since independence in 1948, brought about by COVID-19 battering the tourism-reliant economy, rising oil prices, populist tax cuts and a ban on the import of chemical fertilizers, which devastated agriculture.

A government official working on procuring medical supplies, said about 180 items were running out, including injections for dialysis patients, medicine for patients who have undergone transplants and certain cancer drugs.

The official, Saman Rathnayake, told Reuters that India, Japan and multilateral donors were helping to provide supplies, but it could take up to four months for items to arrive.

In the meantime, Sri Lanka has called on private donors, both at home and abroad, for help, he said.

Doctors say they are more worried than the patients or their relatives, as they are aware of the gravity of the situation and the consequences.

Referring to the ubiquitous queues for petrol and cooking gas, Doctor Vasan Ratnasingam, a spokesman for the Government Medical Officers' Association, said the consequences for people awaiting treatment were so much more dire.

"If patients are in a queue for drugs, they will lose their lives," said Ratnasingam.

The mother of Binuli Bimsara, a four-year-old girl being treated for leukaemia, said she and her husband were terrified.

"Earlier, we had at least some hope because we had the medication but now we are living under tremendous fear," the mother said.

"We are really helpless, our future is really dark when we hear about a shortage of medicines. We don't have money to take our child abroad for treatment."

Indian authorities delivered 25 tonnes of medical supplies, along with other aid, on Sunday, officials said.

"At no time has India assisted any other country to this extent ... This is something for which we are deeply grateful," Sri Lanka's foreign minister, G.L. Peiris, said at Colombo's port as he stood by a vessel bringing in thousands of sacks of supplies.

"This is probably the most difficult period that Sri Lanka has had to face since independence."