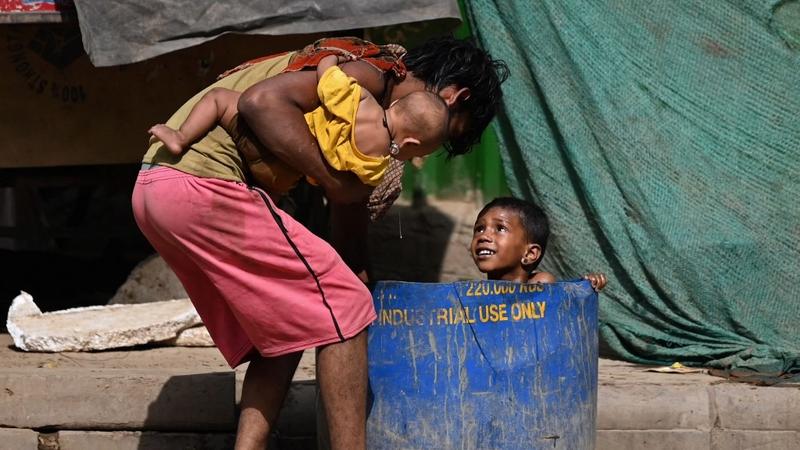 A man carrying a child speaks with a boy sitting in a water tub along the roadside on a hot summer day in New Delhi on May 22, 2022. (SAJJAD HUSSAIN / AFP)

South Asia's deadly heatwave in March and April was made 30 times more likely because of climate change, scientists reported Monday.

Without climate change, such heatwaves would be "extraordinarily rare," according to scientists with World Weather Attribution

As April temperatures hit nearly 50 C in parts of northern India and Pakistan, at least 90 people died from heat-related causes, officials have said. The heatwave, which had delivered record temperatures in India in March, also badly damaged the country's winter wheat crop.

Without climate change, such heatwaves would be "extraordinarily rare," according to scientists with World Weather Attribution, an international research collaboration that works to tease out how much climate change plays a role in specific weather events.

Now, with the average temperature having warmed about 1.2 C above the preindustrial average, such heatwaves in South Asia are 30 times more likely to occur. And that frequency is expected to increase as global temperatures continue to rise.

For example, "in a 2C warmer world, what is a 1-in-100 year event now can be as frequent as a 1-in-5 year event," said hydroclimatologist Arpita Mondal at the Indian Institute of Technology Bombay, in a news briefing.

To conduct their analysis, the scientists compared temperature data readings for the months of March and April dating back several decades with what conditions might have been without climate change, based on computer simulations.

"People in South Asia are used to some level of hot temperatures," said Roop Singh, climate risk advisor at the Red Cross Red Crescent Climate Centre. "But when it gets to 45C or over, it becomes really difficult to carry out regular activities."