By Yifan Xu in Washington 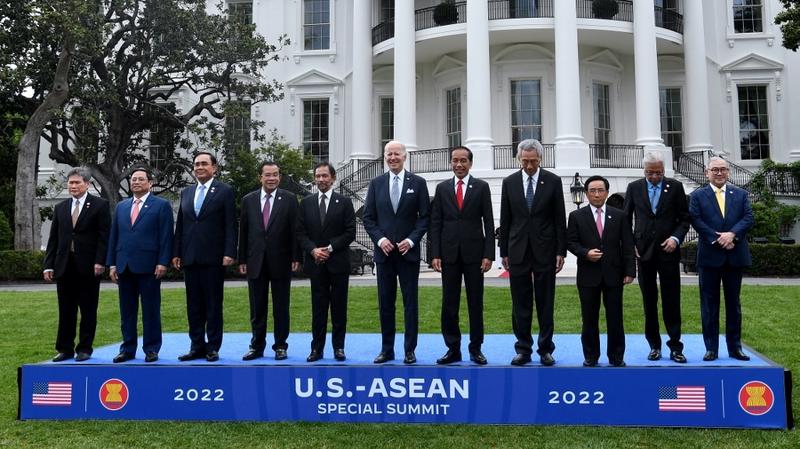 US President Joe Biden (center) and leaders from the Association of Southeast Asian Nations (ASEAN) pose for a group photo on the South Lawn of the White House in Washington, DC, May 12, 2022. (NICHOLAS KAMM / AFP)

Member countries of the Association of Southeast Asian Nations want to find a balance between Washington and Beijing to pursue development, but the US is drawing a dividing line, some US experts said as they talked about the US-ASEAN Special Summit in Washington on Thursday and Friday.

Jack Midgley, principal of global consultancy Midgley& Co and an adjunct associate professor in the Security Studies Program at Georgetown University, said that what the ASEAN countries are signaling is that they want balance. The summit "is very much about geopolitical competition", he said.

"In many ways, one of the hopeful things we're seeing here is that this competition is being framed as an economic competition."

Sourabh Gupta, a senior fellow at the Institute for China-America Studies in Washington, said ASEAN countries "would continue to find a balance point" between the US and China following the summit. One of the US' goals is to "set its own standards as an aggression", and "at the end of the day, it started drawing dividing lines in Asia", he said.

The US created an image of new great power competition, which is unnecessary, Gupta said.

"That great power competition does not have to arise. Both parties, both sides can work together to the bilateral benefit of themselves, as well as for the benefit of the region, but if you are going to prosecute a great power competition, it is essential then that somebody be that adversary, and the US is trying to create an adversary out of China when there is not exactly a need or necessity to do so."

Gupta said he is "not comfortable" with such action, "but that is where US policy has gone from some point of time, and it is this artificial construction of a great power competition in Asia which I find very disheartening.

"As we've seen, dividing lines in Europe have not ended well for Europe, and Beijing would not like this sort of dividing lines to be imported into Asia and then create some sort of tension."

The White House said ASEAN leaders met the officials of the US Congress and US business leaders and attended a dinner hosted by President Joe Biden and a working lunch at the State Department with Vice-President Kamala Harris and Secretary of State Antony Blinken. They also attended an event at the White House commemorating 45 years of relations between the US and ASEAN.

The tone toward China of the two-day summit and the remarks at it, Midgley said, were "moderate" as he expected, and "there's a lot of good reasons to take a moderate tone".

"I think the American government is going to set a more balanced tone toward China, particularly with the conflict raging in Ukraine, with the current COVID issues that our Chinese friends are dealing with …and the issues around the supply chain. Our issues really can badly hurt the American economy, and they need to be managed on a bilateral basis between the US and Chinese sides. And so I think there's a great opportunity now to take a more balanced tone, a little more moderate tone toward China."

On the tone of the summit, Gupta said whether it was tough or moderate regarding China was irrelevant.

"The aim of the United States as of late has been to pretend as if the Indo-Pacific can move forward peacefully and prosperously on a minus-China basis. This is an absurd proposition. But to the extent that Washington keeps pushing this line to deepen relationships in Asia without overtly antagonizing or calling out China, I don't think it should bother Beijing."

During the summit, Biden promised a new investment of $150 million in the region, including the deployment of a Coast Guard cutter.

The $150 million was "just a very small amount of money spread across a lot of different programs", Midgley said.

"The American side wants to avoid opening-up US markets too much to the ASEAN countries because the result would be a flood of low-cost goods, which would probably cost American jobs."