A new breed of smartphone apps is making it easier for people with visual impairment to navigate their daily lives and the world around them, Zhang Zhouxiang reports. 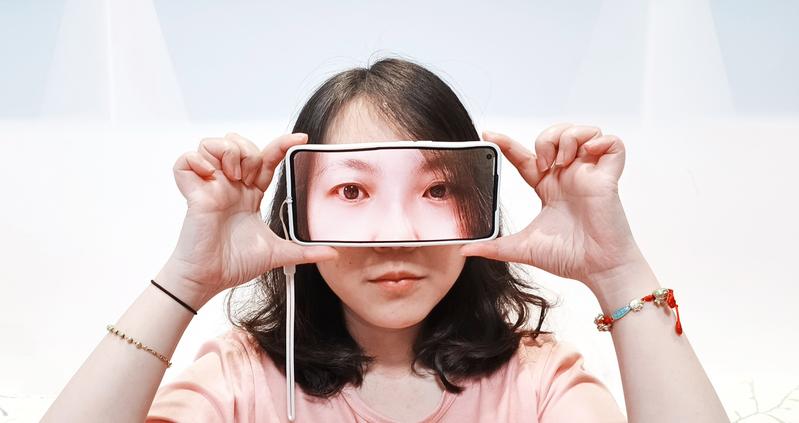 A volunteer poses in a photo for a nonprofit organization that helps visually impaired people to get assistance via a smartphone app. (PHOTO PROVIDED TO CHINA DAILY)

It was a hot afternoon and Li Heng (pseudonym) was lying sleepily on the sofa, browsing random video clips on his smartphone when a video call came in. He clicked on the "accept "icon, and saw a female wearing sunglasses, around 50 years old, on the screen.

"I've dropped my keys and I cannot find them," she said with politeness, but her face was obviously full of fatigue, "Can you have a look?"

To seek help from strangers is the last choice they will make, but it’s a necessary one because they often meet difficulties.

He guided her to move her fingers down the screen to switch on the smartphone light bulb, and then move the phone up, down, left and right. He soon spotted her key ring lying on the floor. With his guidance, the woman picked it up, thanked him and they ended the call.

The woman is one of some 9,000 visually impaired users of an app aimed at helping them, while Li is one of over 110,000 volunteers registered and ready to provide that help via video call.

Currently, there are three main apps in this field that can be installed on smartphones in China. Be My Eyes was first developed in Norway, linking volunteers and visually impaired users all over the globe; Eye Coming and Rebuild Eyes, both developed domestically, concentrate on the Chinese mainland.

All three work in a similar way: The visually impaired user sends out a call for help to the server, which is then distributed to several volunteers according to their available hours, and a video call would be established with the first one who answers the call.

It's very helpful, according to Yang Qingfeng, a blind person who founded Golden Cane, a Beijing-based program aimed at helping the visually impaired. "For the visually impaired, even the most basic daily activities can be challenging, and that's why many of them need a family member as company, or they dare not leave home. But with technology, anybody can help them. There are always good-hearted people who have time now and then to answer a video call."

It might be difficult to imagine, but for those suffering from visual impairment, even the easiest tasks such as crossing the road become extremely challenging. Yang says once he traveled to a city and shared a dormitory room with three other visually impaired individuals. The four enjoyed playing poker late into the night, but, when trying to close the curtain, they could not find any button. It was difficult to get service at that hour, so they called for help via the app.

A girl in the United States answered and, with her help, they found a touch screen that controlled the curtain. It took 10 minutes for her to guide them to close it.

On the social service section of the website douban.com, a volunteer with the ID Xiaogudao shared her experience of guiding someone to the other side of the road. The person held the smartphone aloft so that the volunteer could see the crossroads clearly. She saw the lights turn green, but in the video, the cars turning right looked so near that she dared not to let the person cross. When she finally gave the caller the all clear, there was still a danger of being hit by the electric motorcycles that were illegally driving against the red light.

The experience reminded her of how she struggled in the water while trying to learn to swim.

Yet, a video call for help she received the following day was even more risky. The person on the other side of the video chat hoped she could help him to recognize what he held in hand. What she saw was a metal can as big as a bowl, with big, bold words saying "flammable, explosive", and "do not turn upside down" on its label.

The first thing that came into her mind was that it was a bomb of some sort and she thought about contacting police explosive experts. But then she saw two small bags of vegetables and a black metal frame in the background. So she calmly asked: "Are you preparing for hot pot?"

The answer was "Yes".

She felt a huge wave of relief and said: "Don't worry. It is a can of fuel."

They laughed and ended the call.

Tao Yong, a senior ophthalmologist and director of the ophthalmology department at Beijing Chaoyang Hospital, affiliated to Capital Medical University, has long made efforts toward caring for the visually impaired. "I have to say that the majority of the people I meet are very shy," he says. "To seek help from strangers is the last choice they will make, but it's a necessary one because they often meet difficulties."

He adds that help from strangers not only solves practical problems for the visually impaired, but also grants them more confidence in life. "Much research is being done on how to help guide the visually impaired in their daily lives. But a human voice has a unique, irreplaceable advantage: It is warm and full of love from one person to another."

For the volunteers, helping others gives them confidence and a sense of being needed, too, Tao says. This is echoed by Li, who says, "Every time I can help a visually impaired person, I feel useful－that's a good feeling."

Li has been registered for three months but, so far, has only received five calls. Of the five, he answered only one－the one described above. "The other four times, I hurried to answer the call, but the system told me it was answered by someone else already," he says. "I feel both sorry that I wasn't able to help, but happy that there are so many kindhearted people."

Yet the app is not so infallible as people might like it to be. Liu Jingyi (pseudonym), a 70-year-old female resident suffering from visual impairment in Hefei, East China's Anhui province, says it was too difficult for her to learn to use a smartphone.

Liu went blind after her optical nerves were damaged in a traffic accident in 2010, when smartphones were not as prevalent as they are today. Not being able to see the screen, she has been unable to learn how to use such devices. "It is very good to know the existence of the channel, but I wish there was somebody to teach me how to use it," she says, "and teach other seniors who are blind, too."

Li Qingzhong, chairperson of China Association of the Blind, said in a media interview on March 15 that 53.24 percent of the over 85 million people with disabilities are aged 60 or above. While elderly life is inconvenient enough, visual impairment makes it worse.

"Many eye illnesses are associated with age," says Tao. "The older a person becomes, the more possible it becomes to develop a visual impairment. Yet, they are the group slowest to adapt to new technologies.

"That's why I hope these apps can progress and help seniors more－by helping them, we are helping those who need it the most," he says.