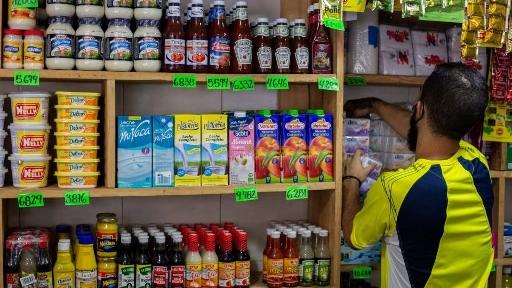 A store employee organises food products in a shelf with the products prices signs in Bolivars in Caracas, Venezuela on Sept 28, 2021. (CRISTIAN HERNANDEZ / AFP)

LONDON - Rising fuel and food prices look set to stoke an "inevitable" rise in civil unrest, with developing middle-income countries such as Brazil or Egypt particularly at risk, a report by a risk consultancy said.

Argentina, Tunisia, Pakistan and Philippines were also among the countries to watch in the next six months, the authors said, pointing to their high dependency on food and energy imports

Three quarters of nations expected to be at high-risk or extreme risk of civil unrest by the fourth quarter of 2022 were middle-income countries, as defined by the World Bank, Verisk Maplecroft said in an update to its political risk monitor.

"Unlike low-income countries, they were rich enough to offer social protection during the pandemic, but now struggle to maintain high social spending that is vital to the living standards of large sections of their populations," the report found.

Argentina, Tunisia, Pakistan and Philippines were also among the countries to watch in the next six months, the authors said, pointing to their high dependency on food and energy imports.

The report pointed to Sri Lanka and Kazakhstan as examples of middle income countries that have already suffered unrest this year. The former saw rising food and fuel prices contribute to escalating tensions, while an attempt to cut fuel subsidies sparked protests in Kazakhstan.

The report found that more than 50 percent of the almost 200 countries covered by the index have experienced an increase in civil unrest since the COVID-19 pandemic hit.