By Wang Xiaoyu in Beijing and Cang Wei in Nanjing 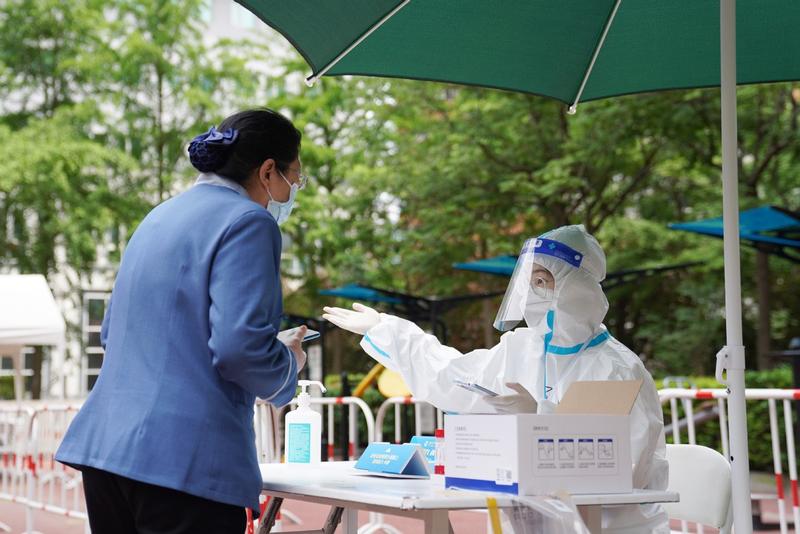 A volunteer registers information for a resident at a nucleic acid testing site in Chaoyang district of Beijing, May 9, 2022. (PHOTO / XINHUA)

Li Baichao, a resident of Beijing's Dongcheng district, once boasted that he had mastered the art of quickly getting a COVID-19 nucleic acid test.

"Arrive at around 4 pm on weekdays or early in the morning on weekends to avoid long lines, and definitely bring your identity card to speed up the registration processes," he said.

But Li recently found that he no longer had to carefully calculate when to take a test to save time, as multiple nucleic acid testing stations have appeared in his neighborhood to meet the surging demand for regular tests amid a locally transmitted outbreak.

"I got my test today at around 10 am on my way to the subway," Li said on Tuesday. "Only around three to four people were waiting in the line before me, and it took me less than a minute to get it done."

Across China, a growing number of regions are offering fast, free and convenient nucleic acid tests to facilitate regular testing campaigns as frequent as three times a week.

Regular testing is considered vital in stemming the spread of the highly transmissible Omicron strain of the novel coronavirus.

During a teleconference held by the State Council's Joint Prevention and Control Mechanism on Monday, Vice-Premier Sun Chunlan said that as China has entered a new stage of the fight against COVID-19 driven by Omicron, the sensitivity of epidemic monitoring and early warning systems should be further improved.

"In large cities, nucleic acid testing facilities should be available within 15 minutes' walking distance," Sun said. "The scope of and channels for (virus) monitoring should be further expanded."

Hangzhou, capital of Zhejiang province, said on April 27 that it would set up about 10,000 free sampling stands across the city and test all residents for free every 48 hours.

On April 30, Beijing said that all residents in the city should be tested at least weekly, while high-risk workers and those living in virus-affected areas would be tested more frequently.

Hefei in Anhui province said on Tuesday that it would give a free test to all residents every five days. Unlike Hangzhou and Beijing, which are currently coping with cluster outbreaks, Hefei has registered no new local cases for nearly two weeks.

However, "as a city with nearly 10 million people and as a transportation hub, we are under great pressure to prevent the spread of the virus from other regions and the Omicron strain can easily trigger new outbreaks," local authorities in Hefei said in a statement.

"Regular nucleic acid testing is an important tool in detecting cases and cutting the spread of the virus."

The idea of establishing a 15-minute circle of testing services stems from on-the-ground experience in Shenzhen, Guangdong province, which has successfully contained dozens of Omicron infection clusters and prevented major resurgences.

As early as mid-March, Lin Hancheng, a health official in Shenzhen, said that the city was striving to build such a testing network, integrating fixed sampling stations with mobile and smaller stands. Later on, the city also required the waiting time for testing to be no longer than 30 minutes.

Lu Hongzhou, president of the Third People's Hospital of Shenzhen, said that as outbreaks continue to emerge nationwide, regular testing has enabled the city to detect new cases in the shortest possible time and stem these more quickly.

"If we can identify an outbreak at its initial phase, there is no chance that it will develop into a major flare-up. This approach is very effective and relatively less costly."

China has developed robust testing resources since the pandemic started more than two years ago.

As of mid-April, the country is capable of processing nearly 51.7 million samples daily, up from 1.26 million in March 2020. If pool testing－mixing twenty samples together for initial screening－is adopted, it can test up to 1 billion people in one day, according to the National Health Commission.

"China is the only country in the world which is able to promptly identify the source of infection, cut the transmission chain and quickly control new outbreaks through mass testing," an unnamed official from the commission was quoted as saying by a newspaper administered by the Central Commission for Discipline Inspection of the Communist Party of China.

In Nanjing, Jiangsu province, a number of new testing stands have been set up this week.

Zhou Mingfei, head of a community service center in Nanjing, said the stands are equipped with air conditioners, disinfection lights and air purifiers.

"It works in a very efficient way," he said. "The stand is put in contact with two laboratories and samples are sent there every two hours," he said.