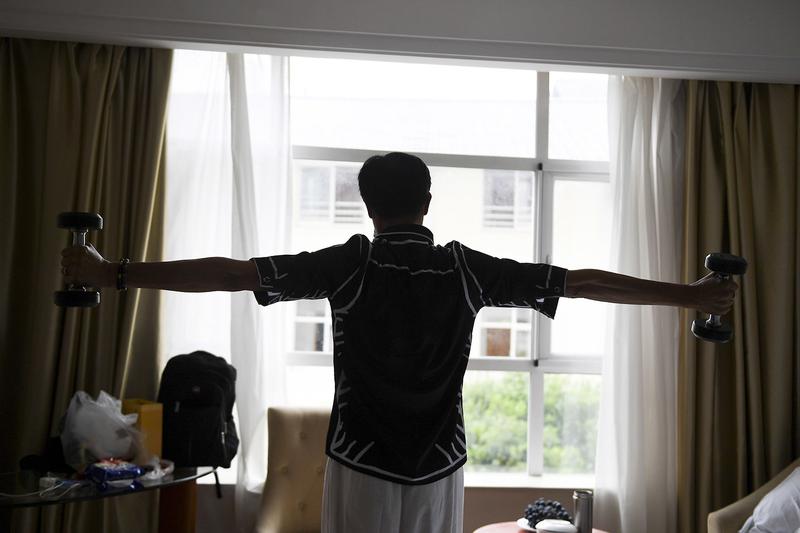 A visitor uses a set of dumbbells in a hotel room in Zhangjiajie, Hunan province. (YANG HUAFENG / CHINA NEWS SERVICE)

He also plays Just Dance, a series of rhythm-related video games that allow him to dance to background music of popular songs, imitating movements of the on-screen dancers. He prefers to exercise at home rather than go to the gym because he feels more comfortable doing workouts in a familiar environment.

Amid the ongoing COVID-19 epidemic, more and more Chinese have realized the importance of health and have started exercising at home because of the control and prevention policy that hinders them from going out sometimes.

In addition to such fitness games, they are also choosing to follow the guidance of online exercise short videos or livestreams. A few are seniors, inspired by their families.

According to China Insights Consultancy, the number of people who exercised in China was about 300 million last year, and is expected to rise to 420 million by 2026. It's expected that the value of China's online fitness market will rise from 370.1 billion yuan ($56.44 billion) last year to 895.8 billion yuan in 2026.

Since the COVID-19 epidemic started in 2020, Xu Chun has formed the habit of taking exercise at home every day via livestreamed fitness classes. 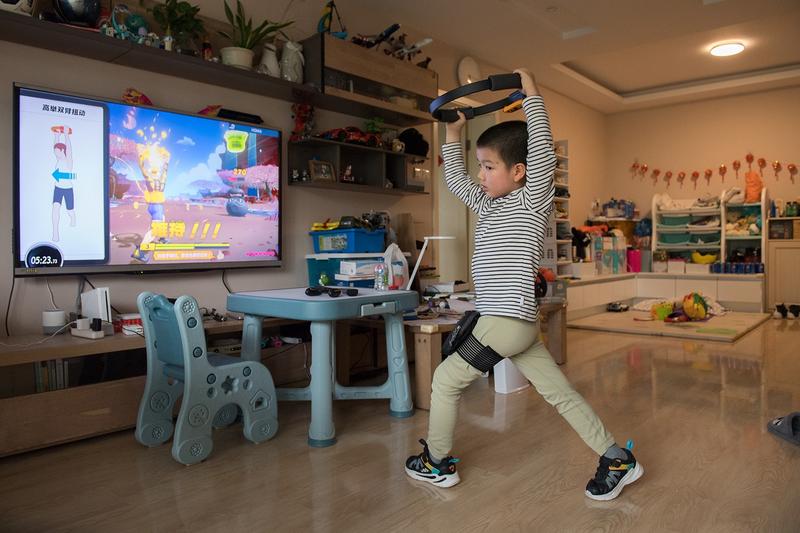 A boy in Shanghai undertakes a popular online exercise while quarantined at home. (CHAO ZICHEN / FOR CHINA DAILY)

Workouts at home are the best option for the 30-year-old because the commute from home to the gym is time-consuming, and she prefers to exercise in a more private place.

In the first three months, she lost 12.5 kilograms due to regular exercise, lifestyle and a healthy diet. Since then, she has kept her weight at about 50 kilograms.

She has made a 3-square-meter space at home into her private gym as she's purchased more exercise equipment, such as an indoor bike, barbells, kettlebells and resistance bands.

"There is nothing better than doing a workout there when I finish my daily work. I feel unwell if I don't exercise for one day," said Xu from Ma'anshan, Anhui province, who runs an online store and works from home.

Fitness app Keep offers those with paid memberships livestreamed exercise classes. While watching such livestreams, users can post "bullet screens"－real-time comments that appear on the screen－to cheer on each other and ask questions, which the coach answers to ease any doubts.

"I love to watch such livestreams because of the immersive atmosphere that encourages you to persist. It's difficult to complete the challenge on your own, especially for hard training like indoor cycling," Xu said.

If someone posts that he or she can't keep up, the coach and other users will encourage them. Xu never watches the playback because such heartening "bullet screens" only appear on livestreams. 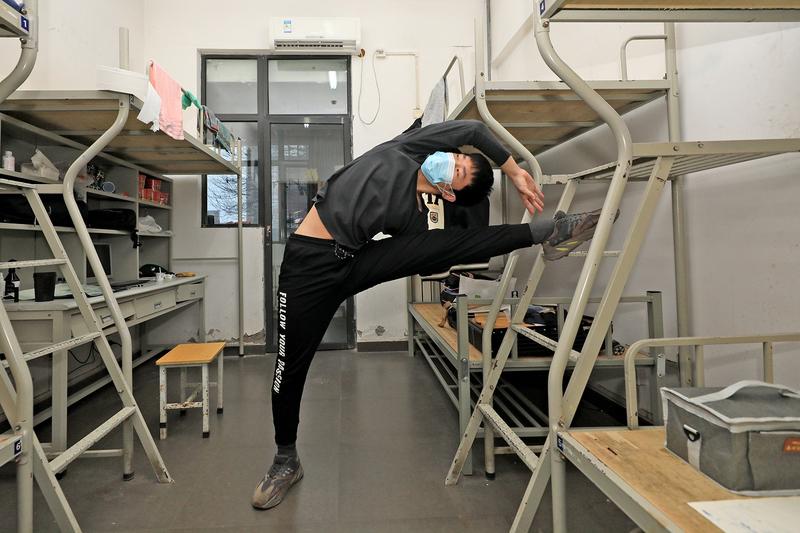 Wang Yinkai, a dance enthusiast, stretches every day while staying in Xi'an, Shaanxi province, to prepare for his postgraduate examinations in January. (PHOTO PROVIDED TO CHINA DAILY)

Those who wear a Keep fitness bracelet can learn about their realtime heart rate and the number of calories burned. However, while only those who tip the most will see their names on the ranking list of livestreams, the rule is different in livestreamed fitness classes－you have to exercise hard to achieve that by burning the most calories.

"It's very encouraging to see my ranking go up gradually on the list on the screen. You can also team up with friends to compete in groups," Xu said. "Bodybuilding is not a passing fad. The key to persistence is to have a relaxed attitude rather than being anxious. I always tell myself that I'm not losing weight, I'm just taking some exercise."

She suggested that starters should choose simple exercises they can stick to until they have formed the habit. She added that they should not be in a hurry to succeed, and that peer encouragement also works. She has a WeChat group with friends to share their routine exercises.

"If I can be a better me, why not work hard for it? I'm more confident now and can dress up in pretty skirts that I once did not dare to wear. Also, I can eat delicious food without worrying that I will gain weight, because I will burn off those calories," she said. "My son is used to my bodybuilding habit and often urges me to exercise. I want to go running with him when I become old, like we do regularly now."

Wang Peng, a coach of Keep's livestreamed sessions, said: "The requirements for livestreaming coaches are high－you must be an athletic person, a quick thinker and capable speaker. We have to be aware of the common problems viewers may have at certain time of the session and remember different words to say to help them to keep going."

For those who wear Keep's fitness bracelet, the coaches can also see their individual situations such as heart rate on a TV screen in front of them, and call out their netizen names to encourage them and answer their questions.

"The important thing is that coaches keep members company via livestreams, thus improving their fitness experience," Wang said. He pointed out that in offline sessions, a coach can see the problems of the person exercising and correct his or her movements.

He added that people who go to the gym like to do advanced weight workouts with professional equipment to exercise certain muscles, and do group fitness sessions guided by a coach. 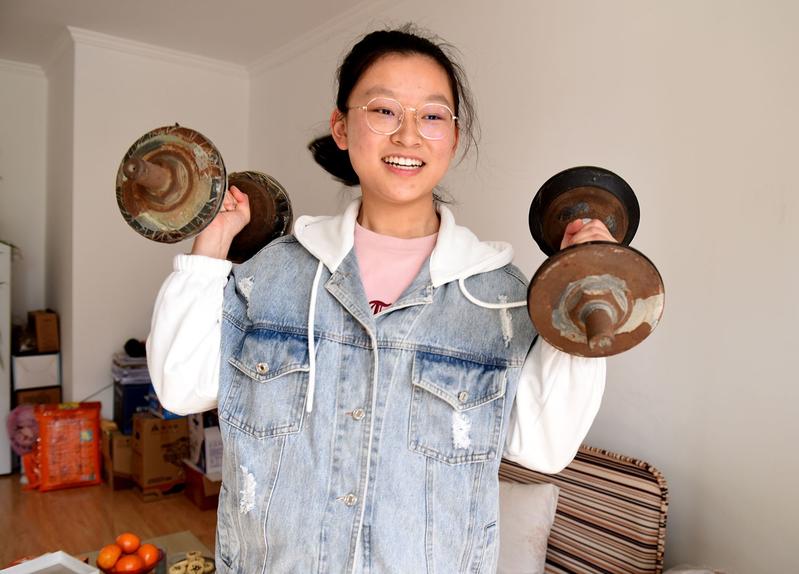 For those who choose to exercise at home, he suggested they do body weight workouts and aerobic exercises, which can help them lose weight and shape their body. A yoga mat and foam shaft, dumbbells and resistance bands can satisfy one's basic fitness demands at home.

Hai Dong, a senior researcher at Keep's Sports Research Institute, said: "Doing online fitness and going to the gym are like dining at home and in a restaurant, which are not mutually exclusive. You can exercise at home via online content anytime you want, which is beneficial to those who do not have enough time to rest, live far from a gym or have an insufficient budget."

He said exercise at home and online fitness are the big trends in China.

"Thanks to the 5G era, exercisers now have access to a rich content of professional and systematic workouts and can interact with coaches via livestreams, which in the past could only be achieved at gyms," he said.

He added that the craze for exercise and keeping fit and COVID-19 are not a completely casual relationship, but the epidemic has spurred the online fitness market. It has caused some offline gyms to go out of business, so coaches have been providing fitness content online.

In April, Liu Keng-hung, a celebrity from Taiwan, and his wife became a craze online due to their livestreams of strenuous exercise with the background music of Taiwan singer Jay Chou.

Liu's account on short-video platform Douyin saw an increase of nearly 40 million fans to about 46 million.

"Liu's extreme popularity means that the nationwide demands for physical fitness have been stirred up. It also means that there are opportunities for those in the online fitness market. Hopefully, more fitness influencers will draw people's attention in the future," Hai said. 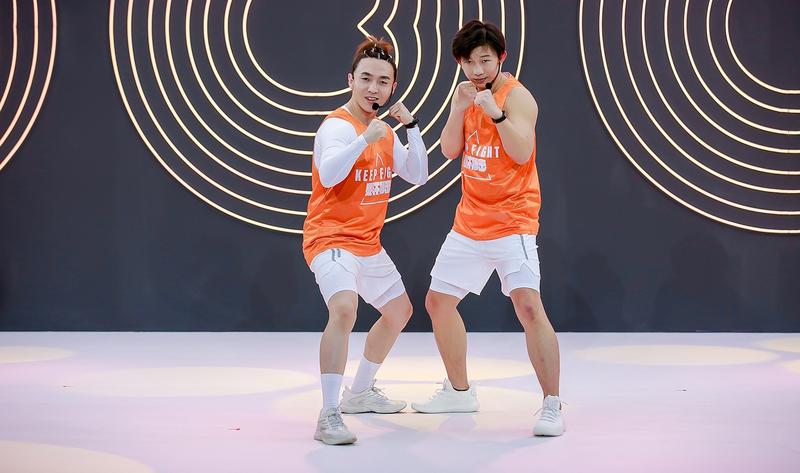 It's not uncommon to see Chinese seniors doing various workouts in parks, such as brisk walking, playing diabolo, shuttlecock and tai chi. Some short videos that have gone viral online show some advanced exercisers doing pullups on the horizontal bar in public.

For most female Chinese seniors, the best exercise is undoubtedly square dancing, during which they can also rub shoulders with their peers.

Qiu Meixia, 59, of Danyang city, Jiangsu province, is an exception. In November, Qiu's daughter－a regular member of HiLefit, a 24-hour gym chain based in Hangzhou, Zhejiang province－bought her a membership that allows her to enjoy online private coach sessions via HiLefit's app.

The retiree takes two one-hour sessions per week via a video chat with her private coach, who organizes a set of scientific workouts in accordance with Liu's condition and demands, and corrects her movements if she does things incorrectly.

"My aim is to tone my body. It's very convenient to do workouts at home, which are arranged according to my schedule. A coach's supervision helps me overcome inertia," Qiu said, adding that she also does yoga on her own.

"You can ask questions at anytime, and the coach will ask about your physical condition, or whether you've had a meal before each session."

Liu only did stretches when she exercised on her own, but now she's learned about strength-training movements, cardio activities and also the importance of warmup exercises.

She has reduced her waistline and improved her figure a little, so she can wear clothes she had outgrown after gaining some weight when she stayed at home as a result of the novel coronavirus outbreak.

"At my age, it's essential to live a happy, healthy and full life. I keep myself busy with colorful activities such as having afternoon tea with friends, and the must-do is my exercise session," she said.

Zhang Wei, who is in charge of HiLefit's home exercise business, said: "The COVID-19 epidemic has boosted the online exercise business in China and raised people's awareness of health. In addition to offline gyms, our brand also provides diverse online courses of short videos and livestreams for members."

He said many people just want to become more physically active rather than to keep fit. As do seniors, who may feel at a loss about how to exercise when they stay at home.

"Early this year, we unveiled our online fitness service specially for the 'gray generation', based on market demand and potential. Like Qiu, users of such online services are those aged from 55 to 65, who have retired. A lower intensity of scientific workout is suitable for them," he said.

According to Zhang the services provide seniors with products that center on their health－for example, teaching workouts that will strengthen the knees. "The crunch" is popular among younger exercisers, but it's not suitable for older people because improper movements may hurt the waist.

He said online fitness content is growing greatly across the whole market, and it is important to help exercisers form the habit of working out, even without the guidance of livestreams.