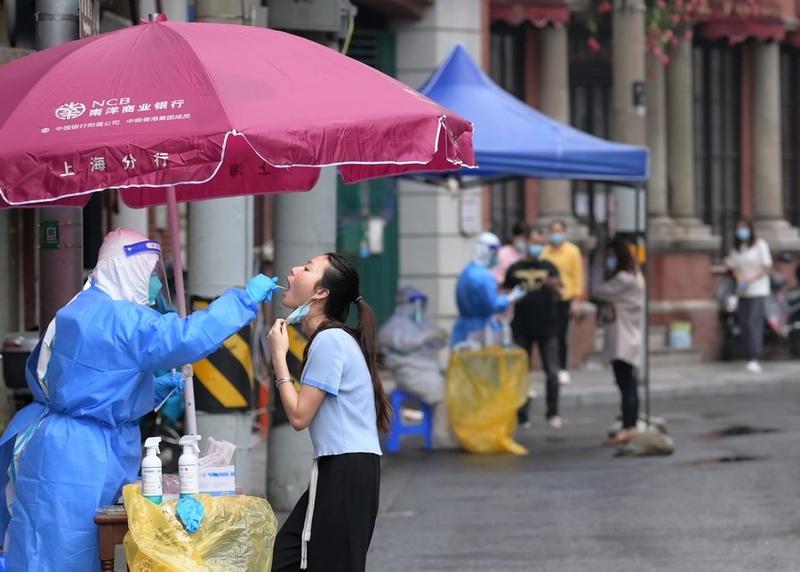 Shanghai announced on Sunday that it has made progress in the handling the COVID-19 pandemic, thanks to joint efforts from city residents and front-line workers from across the country over the past month.

The pandemic situation in the municipality is stable and improving, and adherence to the nation’s “dynamic zero-COVID” strategy has paid off, said Gu Honghui, deputy secretary-general of the Shanghai municipal government.

The pandemic situation in the municipality is stable and improving, and adherence to the nation’s “dynamic zero-COVID” strategy has paid off, said Gu Honghui, deputy secretary-general of the Shanghai municipal government

“The overall trend of locally transmitted infections has been declining with fluctuations since reaching a daily peak of 27,605 on April 13,” said Gu, who is also director of the office of the municipal epidemic prevention and control leading group.

Since Wednesday, the number of new infections daily has been below 10,000 for four consecutive days in the municipality of 25 million residents.

The effective transmission index of this wave of the epidemic has dropped from 2.27 early on to 0.67 now, and has remained below 1 for 15 days, he said.

In addition, the rate of individuals who tested positive through nucleic acid and antigen screening has gradually decreased.

“The risk of community transmission in the city has been effectively curbed according to experts’ comprehensive judgment,” Gu said.

However, Vice-Premier Sun Chunlan said on Sunday that Shanghai is still in a key phase fighting the epidemic and efforts should not be relaxed to achieve elimination of the virus in communities and prevent cases from rebounding.

Shanghai registered 788 local COVID-19 confirmed cases and 7,084 asymptomatic infections on Saturday. It was the second day that all the infections were those who were already under quarantine.

The city started implementing a three-zone epidemic control system that categorizes its communities based on their risk of exposure to COVID-19 on April 11. The system categorized communities into three zones — lockdown, controlled and precautionary.

Six districts have basically eliminated new infections outside quarantine areas. The number of residents in lockdown zones dropped to more than 3 million.

Also on Saturday, the first citylevel fangcang, or makeshift hospital, closed after operating for 38 days and receiving nearly 3,200 patients. It had been renovated from a nonmedical institution and contained 1,900 beds.

However, Gu stressed that the current number of daily new infections is still high, and there is still much work to be done to treat severely ill and critical patients.

As of Saturday, there were 342 severely ill and 61 critical COVID-19 patients in Shanghai. In addition, the city registered 38 related deaths.

The average age of those who died was 81. Those cases all suffered from serious acute or chronic underlying diseases, which contributed to their deaths. Only three were vaccinated.

Wu Jinglei, director of the Shanghai Municipal Health Commission, said that the city’s residents will undergo a week of nucleic acid and antigen tests starting on Sunday.

In the five suburban districts that have basically realized the elimination of COVID-19 cases in communities, people can move about their areas and go to supermarkets, pharmacies and hospitals. Public transportation will resume gradually.

Liu Min, director of the Shanghai Municipal Commerce Commission, said that by the end of last month, more than 2,400 drugstores, or 55 percent of the city’s total, had resumed operations.

“Basically, there are opened drugstores accessible to the public in each subdistrict,” she said.

These shops are encouraged to take orders from residents in lockdown and controlled zones to ensure daily necessity supplies, Liu said.

According to Cai Jingyan, deputy director of the Shanghai Municipal Road Transport Administrative Bureau, taxis that were put into service last month to transport non-COVID-19 patients to and from hospitals have made about 15,700 trips.