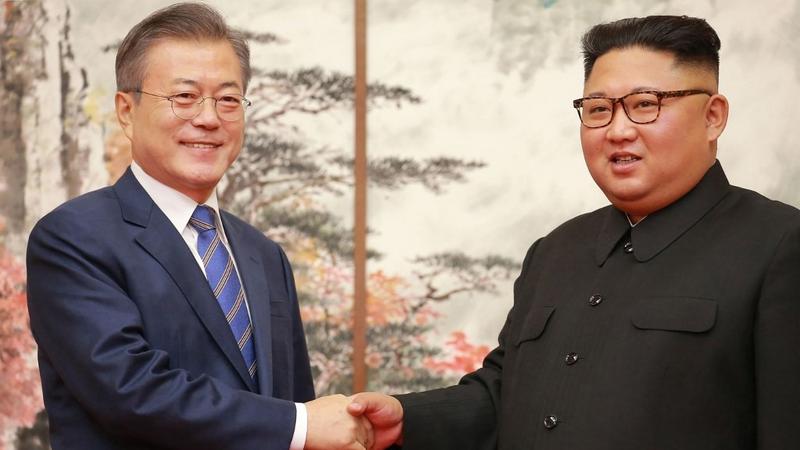 This photo taken on Sept 19, 2018 and released by the Korean Central News Agency via KNS shows the Republic of Korea's President Moon Jae-in (left) and the Democratic People's Republic of Korea's leader Kim Jong-un shaking hands during a joint press conference after their summit at the Paekhwawon State Guesthouse in Pyongyang. (PHOTO / KCNA VIA KNS / AFP)

ROK president Moon Jae-in said in his letter that he is willing to make the north-south joint declarations the foundation for the reunification even after his retirement, according to the KCNA

The report said Kim sent his reply letter on Thursday after receiving a personal letter from Moon on Wednesday, and the two leaders exchanged best regards in the letters.

Moon, whose single five-year term ends on May 9, said in his letter that he is willing to make the north-south joint declarations the foundation for the reunification even after his retirement, according to the KCNA.

In his reply, Kim appreciated the pains and efforts taken by Moon for the great cause of the nation until the last days of his term of office, and said the inter-Korean relations would improve and develop as desired and anticipated by the nation if both countries make tireless efforts with hope.

The exchange of the personal letters between the two leaders "is an expression of their deep trust," the report read.

Kim and Moon met three times in 2018 in a bid to improve bilateral ties. On Sept 19 that year, the two leaders signed an agreement in Pyongyang which calls for a military agreement, civilian exchanges and cooperation in many areas.