Shaky Scheffler holds on to take lead into Masters final round 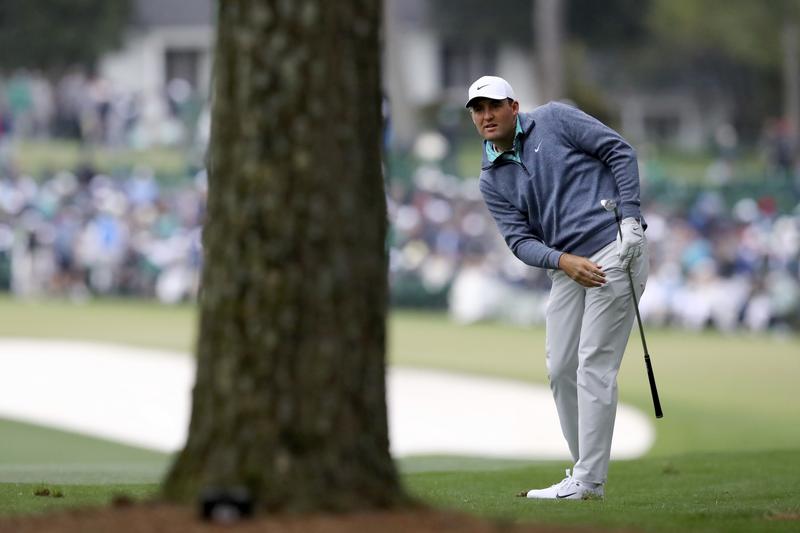 Scottie Scheffler watches his second shot on the first fairway during the third round of the Masters golf tournament at Augusta National on April 9, 2022, in Augusta, Ga. (CURTIS  COMPTON / ATLANTA JOURNAL- CONSTITUTION VIA AP)

AUGUSTA, Ga - Scottie Scheffler pried the Masters spotlight from Tiger Woods on Saturday when the world number one survived a back nine wobble to take a three-shot lead into the final round at Augusta National.

Playing his first event since a car crash 14 months ago that almost cost him his leg, Woods' return had eclipsed everything else until Saturday when Scheffler watched what had been a six-shot advantage halved to just three as he stumbled to the finish with three bogeys over his final five holes for a one-under 71.

Playing his first event since a car crash 14 months ago that almost cost him his leg, Tiger Woods' return had eclipsed everything else until Saturday when Scottie Scheffler watched what had been a six-shot advantage halved to just three as he stumbled to the finish with three bogeys over his final five holes for a one-under 71

The damage could have been worse when Scheffler's tee shot on 18 disappeared into bushes and gave him little choice other than to take a one-shot penalty.

With the sun setting Scheffler unleashed a brilliant approach that allowed him to happily walk away with a bogey three shots clear of Australian Cameron Smith, who posted the round of the day of four-under 68.

South Korea's Im Sung-jae, runner-up at the 2020 Masters, also had a 71 to sit five back, while Irishman Shane Lowry (73), and South African Charl Schwartzel (73) are seven adrift of the leader.

"Fortunately, they found the ball," said Scheffler, about his adventures on the 18th. "All I was trying to do was figure out how I was going to get it on the green for my third shot.

"Fortunately, I was able to take an unplayable out of the bush and still have a swing.

"I hit a really good shot and had a nice up-and-down."

The Green Jacket is now shaping up as a battle between the planet's two hottest golfers, Scheffler, winner of three of his last five PGA Tour starts and Smith, winner of golf's unofficial fifth major the Players Championship in March.

"Should be a great fight tomorrow," said Scheffler. "Obviously Cam is a tremendous player, and he's got a fantastic short game, and he's coming off a huge win at The Players.

"Both of us are in good form, so I'm definitely looking forward to the challenge of playing with him tomorrow."

Scheffler started the third round with a five-shot cushion and turned up the heat on a cold, wind-whipped afternoon with birdies at two and three and two more at six and eight with a single bogey sandwiched in-between.

But just as he looked poised to run off with the Green Jacket he lost his way with four bogeys offset by two birdies on his back nine.

Woods is never one to wave the white flag but after returning a 78, his worst round ever at the Masters, to fall 16 shots behind the leader, a record-equalling sixth Green Jacket would require a miracle even bigger than the one that allowed him to return to competitive golf after nearly having his leg amputated.

As always Woods battled to the end, the weary 46-year-old finishing bogey, bogey, double-bogey and a roaring ovation from the adoring crowd for a brave effort.

"Never give up. Always chase after your dreams," said Woods. "And I fight each and every day.

"Each and every day is a challenge.

"Each and every day presents its own different challenges for all of us. I wake up and start the fight all over again."