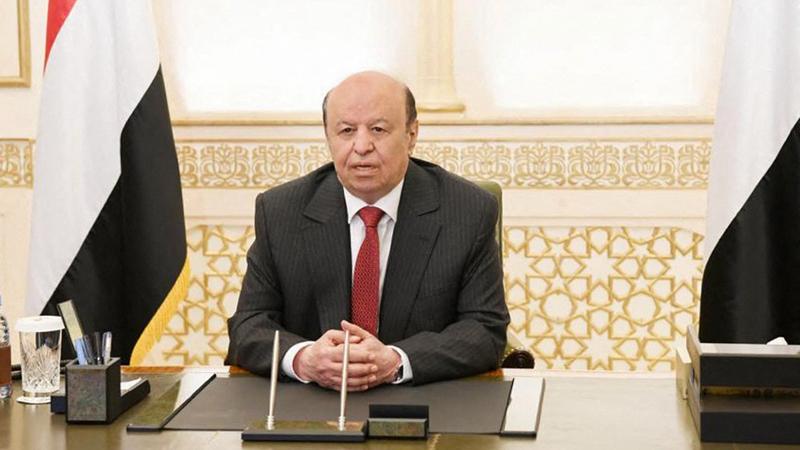 A handout photo made available by the Yemeni Presidency on Sept 24, 2020 shows President Abedrabbo Mansour Hadi delivering a speech from his residence in the Saudi capital Riyadh during the virtual 75th session of the United Nations General Assembly. (YEMENI PRESIDENCY / AFP)

ADEN- Yemen's president said on Thursday he has dismissed Vice-President Ali Mohsen al-Ahmar and delegated his own powers to a presidential council that will carry out leadership duties.

The new body will assume the duties of both the president and his deputy, said a statement from President Abd-Rabbu Mansour Hadi.

The new council will carry out political, military and security duties for the Yemeni government during what it refers to as a "transitional period".

A presidential council will carry out political, military and security duties for the Yemeni government during what it refers to as a "transitional period"

Hadi was elected in 2012 following the political upheaval of a 2011 uprising to a two-year term to oversee a democratic transition. But in late 2014, the Iran-aligned Houthi group seized the capital Sanaa and Hadi eventually fled south and then to Saudi Arabia and remained as head of the internationally-recognized government.

Hadi's statement said the move was taken in line with a 2011 power transfer initiative devised by the six-member Gulf Cooperation Council in the wake of the anti-government protests and political crisis.

"With this declaration a Presidential Leadership Council shall be established to complete the implementation of the tasks of the transitional period. I irreversibly delegate to the Presidential Leadership Council my full powers in accordance with the constitution and the Gulf Initiative and its executive mechanism," Hadi later said on Yemeni state TV, seated in front of two Yemeni flags.

Seven years of conflict have divided Yemen between an internationally-recognized government led by Hadi and backed by Saudi Arabia based in the southern city of Aden, and the Houthis in Sanaa.

The leadership council, made up of a chair and seven deputy chairmen, will be led by Rashad Al-Alimi, a security official who was interior minister during the former presidency of Ali Abdullah Saleh.

Alimi, who had been an advisor to Hadi, has the support of Saudi Arabia. He also has a close relationship with the major political grouping, the Islamist Islah party.

A UN-brokered two-month truce began across Yemen on Saturday, the first nationwide cessation of hostilities since 2016.

Political consultations are also happening in Riyadh under the aegis of the Riyadh-based GCC, although the Houthi group did not accept an invitation to attend those talks.