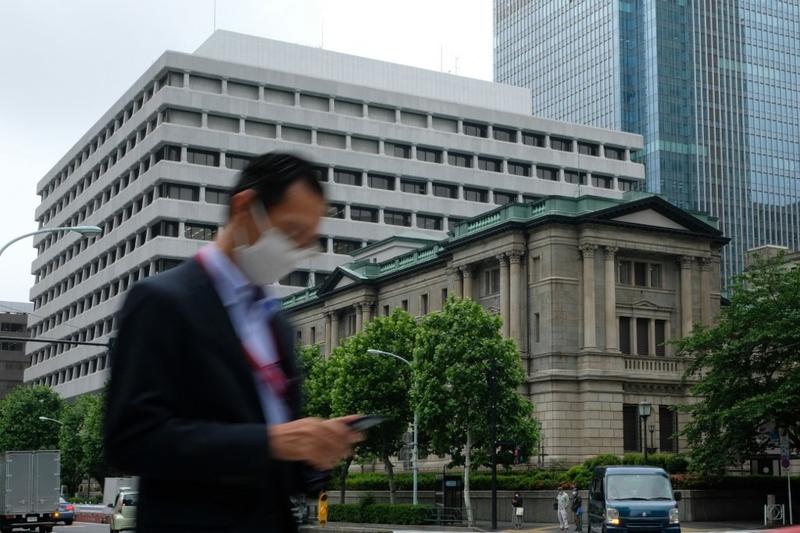 A man wearing a face mask walks past the Bank of Japan headquarters in Tokyo on May 22, 2020. (KAZUHIRO NOGI / AFP)

TOKYO - The Bank of Japan desperately defended its yield target on Monday by making two offers in a single day to buy an unlimited amount of government bonds, as it struggled to swim against the global tide toward higher interest rates.

The central bank's efforts to defend its ultra-loose policy pushed the yen to a six-year low of 123.25 to the dollar on Monday, pinching Japan's economy by inflating already surging fuel and raw material imports.

"The power of the BOJ's unlimited bond-buy offer is clearly waning," said Takahide Kiuchi, a former central bank board member who is now an economist at Nomura Research Institute.

"Markets may more forcefully test the BOJ's resolve to defend the 0.25 percent ceiling, which may prompt the bank to modify its approach and allow the 10-year yield to rise more."

After the morning offer failed to push down yields, the BOJ made a second offer in the afternoon to buy unlimited amounts of JGBs with maturities of more than five years and up to 10 years

The yield on the benchmark 10-year Japanese government bond hit a fresh six-year high of 0.250 percent on Monday, even after the BOJ stepped into the market with an offer to buy unlimited amount of JGBs to defend the implicit 0.25 percent cap set around its yield target.

After the morning offer failed to push down yields, the BOJ made a second offer in the afternoon to buy unlimited amounts of JGBs with maturities of more than five years and up to 10 years.

While the first offer drew no bids, the BOJ accepted bids to buy 64.5 billion yen ($524 million) in JGBs in the second offer.

The two offers, which were the first since Feb 10, underscored the BOJ's resolve to keep rates ultra-low in contrast to the Federal Reserve's aggressive rate hike plans.

"Markets are putting the BOJ to test, so the central bank has no choice but to keep offering unlimited bond buying," said Takafumi Yamawaki, head of Japan fixed income research at JPMorgan Securities.

"If yields are allowed to move above 0.25 percent, investors will think the BOJ has tolerated a rise above that level. That makes it harder for the BOJ to carry on with yield curve control."

Under yield curve control, the BOJ pledges to guide the 10-year JGB yield around 0 percent as part of efforts to stimulate the economy by keeping borrowing costs low.

The 10-year JGB yield has been creeping up in tandem with a rise in US long-term interest rates, as investors have priced in the prospect of aggressive rate hikes by the Federal Reserve.

Markets had been focusing on when the BOJ could step in to defend the 0.25 percent ceiling, after refraining to do so on Friday as the 10-year yield topped the level at which the central bank had offered to buy an unlimited amount in February.

"In light of recent moves in long-term interest rates, we made the offer to ensure we abide by the board's guidance to have the 10-year JGB yield move around the 0 percent target," a BOJ official told Reuters.

The BOJ's current guidance is that it will allow the 10-year yield to move flexibly around its 0 percent target as long as it stays below the 0.25 percent upper limit, though it will take into account not just the level but the speed of any rise in yields.

The 10-year JGB yield has been creeping up in tandem with a rise in US long-term interest rates, as investors have priced in the prospect of aggressive rate hikes by the Federal Reserve over the course of this year.

BOJ Governor Haruhiko Kuroda has repeatedly said the central bank would maintain interest rates at the current ultra-low levels, given the fragile economic recovery and as inflation remains well below its 2 percent target.

The dollar climbed roughly 0.95 percent to 123.25 yen on Monday, its highest since December 2015. It rallied over 7 percent so far in March, its biggest monthly gain in over five years.

The BOJ is caught in a dilemma. By capping rates at zero, it is fueling yen declines that may hurt the economy by pushing up the cost of living for households and companies.

While the offer drew no bids from financial institutions on Monday, the BOJ's announcement will effectively discourage market players from driving up the 10-year yield above 0.25 percent, analysts say.

But some market players doubt how long the BOJ can continue defending the ceiling, as making frequent offers for unlimited buying could weaken the yen further and inflate Japan's already surging import costs.

"Making offers for unlimited bond buying too frequently may cast doubt over the feasibility of yield curve control," said Shotaro Kugo, an economist at Daiwa Institute of Research.

"It may also draw unwanted public attention over the weak yen, so the BOJ probably wants to avoid stepping in too often."