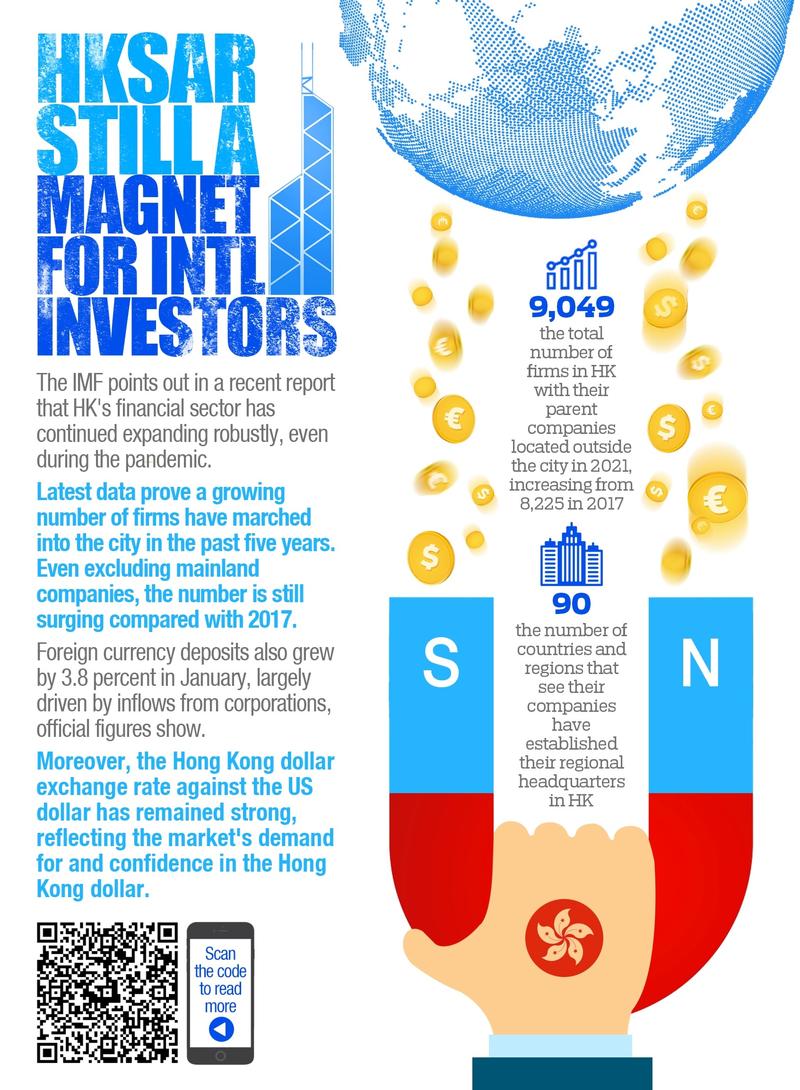 Facts have shown that Hong Kong can maintain an attractive and competitive international financial hub against the brunt of COVID-19.

The latest recognition comes from the International Monetary Fund, reaffirming Hong Kong’s position as a major global financial center in a report released on March 8. The IMF pointed out that Hong Kong’s financial sector has continued expanding robustly, even during the pandemic.

The conclusion is in accordance with the latest statistics of Hong Kong’s international organization volume and capital flow indicators.

Different from some assumptions, the latest data prove a growing number of firms have marched into the city in the past five years. The total number of firms in Hong Kong with their parent companies located outside the city actually kept increasing, from 8,225 in 2017 to 9,049 in 2021, according to a survey by the Census and Statistics Department.

Even excluding mainland companies, the number is still surging compared with 2017.

What’s worth mentioning is that the United States set up the largest number of regional headquarters in Hong Kong, though those from the mainland are quickly catching up.

The survey also shows a rich diversity in Hong Kong as companies from about 90 locations have established their regional headquarters here, including the United Kingdom, France, Singapore and Germany.

Another financial indicator — Hong Kong’s overall balance of payments (the economic transactions between residents and non-residents) — recorded a surplus in two of the first three quarters of 2021, meaning capital was flowing in, according to the latest data released by the Census and Statistics Department. Fluctuations are unavoidable in all economic development phases, not to mention in such a difficult time impinged by the epidemic.

Foreign currency deposits also grew by 3.8 percent in January 2022, largely driven by inflows from corporations, according to statistics published on Feb 28 by the Hong Kong Monetary Authority.

However, no economies can dodge the fallout of the COVID-19 pandemic, but it is at such a critical moment that an economy’s true courage and self-confidence can be tested, and prioritizing citizens’ health is the right direction.

Many international firms believe controlling the fifth raging wave of the pandemic effectively is also a demonstration of the city’s true strength and will further boost their confidence in Hong Kong.

Many businesses in Hong Kong are impaired more or less, but companies who choose to take advantage of the opportunity to adjust and improve are more likely to gain an upper hand when the pandemic is under control. For example, the 11.3 percent office vacancy rate in the last quarter of 2021 could also translate to lower rental costs, and a chance to upgrade offices or shops in one of the most expensive cities in the world.

It is true that a few organizations have left or are considering a temporary departure, but the tie is still tight, and most are expected to return. More importantly, the city is willing and has the capability to welcome them again.

The reason is, Hong Kong can serve as a strong foothold for those who plan to establish or expand a long-term business with the Chinese mainland and other Asian markets, given its deep-rooted advantages of the international legal system, standards and tax system, and well established access to regional markets.

The author is a Hong Kong-based journalist.