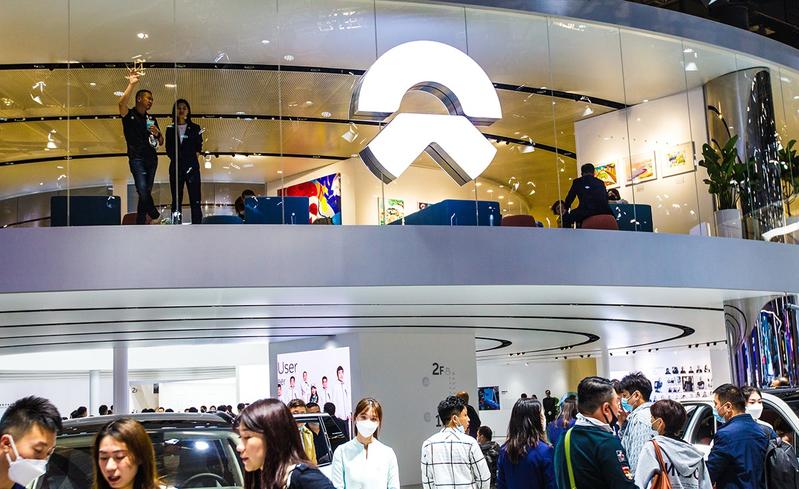 Visitors gather at Nio's booth during an auto expo in Shanghai in April. (GAO YUWEN / FOR CHINA DAILY)

As global smartphone makers such as Apple and Xiaomi are making inroads into the auto industry, some Chinese carmakers are moving the other way around.

It is not necessarily the result of a greener grass mindset. Instead, analysts and company executives said the focus of such carmakers is to improve the user experience of their smart vehicles.

The platform said Yin Shuijun, a former president of Chinese phone maker MeituKiss, is now heading the team. Nio said it does not have relevant information to release for the time being. Yin was not immediately available for comment.

Zhang Xiang, an auto analyst and researcher at the North China University of Technology, said smartphones and smart cars can be part of the same big mobile internet system, so it does make a difference for carmakers to explore the smartphone segment.

Starting from Tesla, electric carmakers across the world have made big touchscreens a must in their models.

Via Bluetooth and 5G, the vehicles' onboard operating system now allows car users to do on the displays whatever they can do on their smartphones, from watching videos and navigating to making phone calls and enjoying music.

But while their functions are becoming similar, the content available on the displays and user experience are becoming key differentiators.

"For Nio, it can make its car owners' in-cabin experience smoother with smartphones from itself as well," said Zhang. "And its brand awareness as a premium car brand helps it to attract smartphone customers, and that kills two birds with one stone."

Geely founder Li Shufu shared a similar thought when the billionaire announced his plan to make phones in late September.

"The major trend in the near future is to create user ecosystems across borders and provide users with a more convenient, smarter and seamlessly connected multiscreen experience," he said. Reuters reported Li's smartphone project will involve an investment of 10 billion yuan ($1.55 billion).

The company, based in Wuhan, Hubei province, said it will integrate Geely's global technologies and resources to develop premium smart devices, including smartphones. It aims to release its first smartphone by 2023 and sell 3 million units in its first year, said Reuters citing an internal memo.

That may sound like an ambitious goal compared with Geely's sales of 1.32 million vehicles last year, but it will be a tiny part of any major smartphone maker's shipments.

While it is easier to make phones than cars, whose customers are more demanding in terms of safety and reliability, analysts said Nio and Geely are not likely to take on the big names in the smartphone sector.

Will Wong, who tracks China's smartphone market at IDC, said Geely's brand recognition in the country will help it break into the premium market.

But he was quick to add that the focus of Geely's mobile phone business is likely to be more on facilitating its ambitions for smart vehicle development, in which all automakers are seeking a key differentiator to succeed.

Zhang, the auto analyst, said Nio will not make phones a big business. "It may make it a niche brand, but will not compete with brands like Xiaomi." In the auto sector, the startup positions itself as a premium carmaker that targets Audi, BMW and Mercedes.