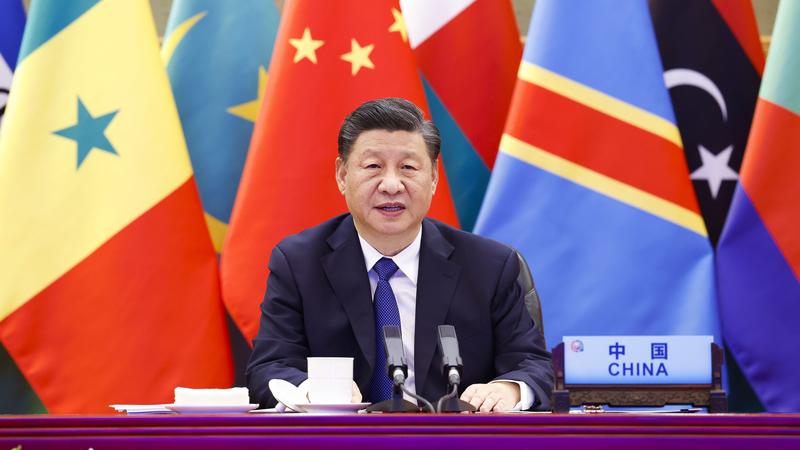 Chinese President Xi Jinping delivers a keynote speech at the opening ceremony of the Eighth Ministerial Conference of the Forum on China-Africa Cooperation via video link in Beijing, China, Nov 29, 2021. (HUANG JINGWEN / XINHUA)

President Xi Jinping has underlined the need for China and African countries to strengthen unity and cooperation to cope with risks and challenges for common development, calling for joint building of a higher-level China-Africa community with a shared future.

Xi, who is also general secretary of the Communist Party of China Central Committee, made the remarks on Wednesday in a message congratulating the inauguration of the Mwalimu Julius Nyerere Leadership School in Tanzania on behalf of the CPC and himself.

The aim of the Mwalimu Julius Nyerere Leadership School in Tanzania is to serve southern Africa in training leadership skills and political principles, with the goal of strengthening unity and cooperation in liberating African economies. China has provided support for construction of the project

The leadership school is a joint effort of six liberation movements from the Southern African Development Community that are now governing parties. The aim is to serve southern Africa in training leadership skills and political principles, with the goal of strengthening unity and cooperation in liberating African economies. China has provided support for construction of the project.

Xi said in the message that over the years, the six parties have united and led their peoples in national independence, construction and development and have won people's strong support.

The school will provide an important platform for strengthening the six parties and raising their governing capacity, and will also help them better lead their countries in realizing national development to benefit their peoples, he added

Noting the world is undergoing profound changes unseen in a century, Xi said that China and Africa need stronger unity and cooperation more than ever to deal with challenges, advance their common development and enhance people's well-being.

The CPC stands ready to take the inauguration of the school as an opportunity to bolster exchanges and mutual learning with the political parties of African countries in governance experience, support each other in pursuing the development path suited to their national conditions, and intensify pragmatic cooperation in various fields, Xi said.

The leadership school is named in honor of Mwalimu Julius Nyerere, the late founding president and former chairperson of the Frontline States, an anti-apartheid coalition of African countries that included Angola, Botswana, Lesotho, Mozambique, Tanzania, Zambia and Zimbabwe, from the 1960s to the early 1990s.