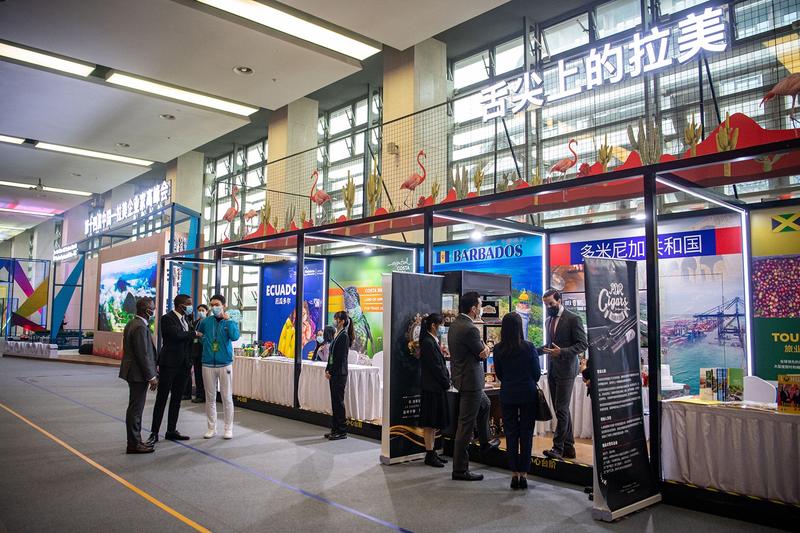 Participants communicate at the 14th China-Latin America and the Caribbean Business Summit held in Chongqing in November. (TANG YI / XINHUA)

CHONGQING－Julio Cruz, a 30-year-old Mexican, came to Southwest China's Chongqing as an exchange student in 2012, a year marking the 40th anniversary of the establishment of diplomatic ties between China and Mexico.

He was among the first Mexican students to study in the city. A decade later, he is still in Chongqing and deeply in love with his adopted home.

As China and Mexico usher in the 50th anniversary of their diplomatic ties this year, Cruz is preparing to embrace his new role in Chongqing: chairman of a local China-Mexico chamber of commerce.

Destiny brought Cruz to Chongqing when, due to his late application for the exchange program, the city was his only option. "When I knew the result, I thought it would be a nightmare. I knew nothing about Chongqing and I could not speak any Chinese at that time," he says.

However, the seemingly strange city offered him homely warmth. As he went out and made new friends in China, he soon fell in love with the mountainous city and took many pictures of Chongqing's unique urban landscape.

He also met his wife during the exchange program and decided to pursue a master's degree in the city.

After graduating, he opened a Mexican restaurant in Chongqing and became its owner and chef, achieving popularity as the locals have a taste for spicy food just like those native to his homeland. "I believe Mexican food has a huge market," he says.

His restaurant developed a large customer base beyond his initial expectations, and some regulars were in tears when he closed the eatery in 2018.

Cruz began to operate foreign trade businesses after his short career as a chef. He now runs a consulting agency for companies based in Chongqing and Mexico, helping those located in China and Mexico to start businesses in one another's country.

"Everyone knows Beijing and Shanghai, but Chongqing, the major motorcycle supplier for Mexico, is easily ignored. However, it has a large potential to develop," says Cruz.

He says, in recent years, Mexico has been paying more attention to Chongqing, and Chongqing has also been eyeing the opportunities in the Central American market.

In 2012, the Mexican company Nemak established a branch in Chongqing, with an investment of almost $130 million, marking the launch of Mexico's first foreign investment program in China. Last year, the 14th China-Latin America and the Caribbean Business Summit was held in Chongqing.

In 2021 alone, the trade value between Chongqing and Mexico was 14 billion yuan ($2.2 billion), up 6.1 percent year-on-year, of which exports totaled 11.88 billion yuan－an annual increase of 20.1 percent.

Cruz has witnessed the new cultural bond that has been established between Chongqing and Mexico. Last year, Chongqing's Fengdu county established a sister-city relationship with Guanajuato in Mexico.

"Coming to China is life-changing. I love Chongqing very much and I want to connect Chongqing with not only Mexico but also North America," he says.