Time for US to change tack on China trade 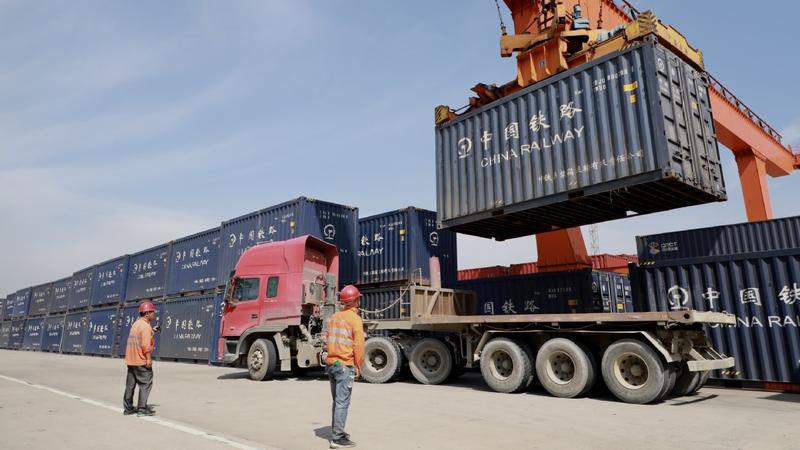 In this undated file photo, a train loaded with sports equipment bound for the US market is ready to depart from Nanchang, Jiangxi province, for Xiamen Port in Fujian province. (HU SHIJIE / FOR CHINA DAILY)

The United States needs to take a completely different approach to address the tensions with China that a prominent economist characterizes as an "accidental conflict" that didn't have to happen.

Among the "false narratives" that led to the hostility toward China was the "trade war" started by former US president Donald Trump, said Stephen Roach, senior fellow at Yale University's Jackson Institute of Global Affairs and former chairman of Morgan Stanley Asia.

"He (Trump) certainly took it to an extreme with this bilateral fixation on addressing our trade deficit by going after one country," Roach said at a webinar hosted by the Asia Society Northern California last week.

The US had trade deficits with 106 countries, which reflects the lack of domestic saving, not the alleged unfair trading practices of one trading partner, he said.

"You can't fix your deficit problem by going after your largest-deficit trading partner," he said. "It didn't work with Japan. It's not working with China."

The better way to address the trade deficit is to make big adjustments in the structure of the US economy, and the trade deficit will fall as a result, said Roach, adding that the US is "unwilling or unable" to do that.

"We fixate on China because it's an excuse for not getting our own house in order in terms of managing our budget deficits over the long term and in boosting our national saving and making US less reliant on surplus savings from abroad, and running massive current account and multilateral trade deficits to attract the capital," said Roach.

"So we have created this problem, not China's fault. If we have problems with the way China conducts itself, according to the rules of global trade, we have every right to file disputes with the World Trade Organization, or with other bodies, but to take unilateral actions, as president Trump did, with China, under the guise of 'making America great again' was a nonstarter from the beginning."

The "trade war" is just an example of the "false narratives" circulated through social media at a speed that has never been seen before, Roach said. "This viral amplification of false narratives, especially in a highly politically charged, politically polarized climate, makes the problem even worse and leads to this escalating cycle of retaliation, which drives the conflict to extremes," he said.

The current approach to China is "failing miserably", said Roach, who proposed three new approaches for the US government.

The first approach is to rebuild trust in areas of mutual interest, such as climate change, global health and cybersecurity, said Roach.

"Secondly, don't worry about bilateral trade," he said. "Worry about the macro conditions that give you multilateral trade deficits, and that means getting our saving position under control.

"If you're concerned about the structural frictions between the US and China, use a new framework to address them. My favorite to do that is a bilateral investment treaty."

The US was very close to reaching a conclusion on a bilateral investment treaty after a decade of negotiations, but after Trump won the presidential election in November 2016, he "wiped the slate clean of virtually all the progress we had made on most of our trade deals", said Roach.

The third approach that Roach proposed is to set up a new permanent bilateral architecture that houses a full-time secretariat between the US and China that focuses on the relationship.

"I want 24/7 attention on all aspects of the relationship staffed by professionals from both sides in a neutral jurisdiction," he said.

While admitting that none of the proposed approaches is easy, he said it's high time for the policymakers to realize that "we are on a dangerous path" as the "trade war" quickly morphed into a "tech war" and now into "the early stages of a second Cold War".