It's snow time on Guizhou's slopes

By Yang Feiyue and Yang Jun

The province is warming up to winter tourism, report Yang Feiyue in Beijing and Yang Jun in Guiyang. 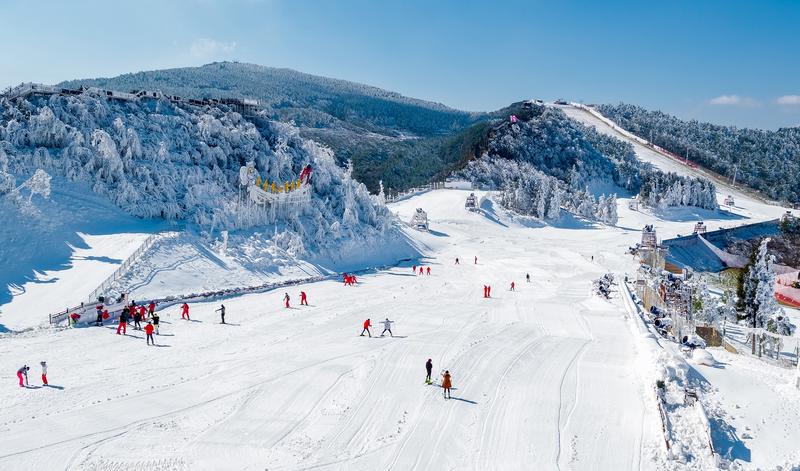 A southwestern city in China has been dishing up diverse experiences to satisfy a growing public enthusiasm for winter activities.

Major ski resorts in Liupanshui in Guizhou province saw full capacity during this year's Spring Festival holiday. Resorts in the city received more than 46,000 visits between Jan 31 and Feb 6, according to local authorities.

Old-time skiers were pulling stunts on intimidating tracks at Meihuashan ski resort while beginners were fumbling their way through the flattened snowfield. Cheers and screams came about at short intervals.

"People are not satisfied just sightseeing on ice and snow but are leaning toward winter sports," says Zhang Jianping, general manager of Meihuashan. 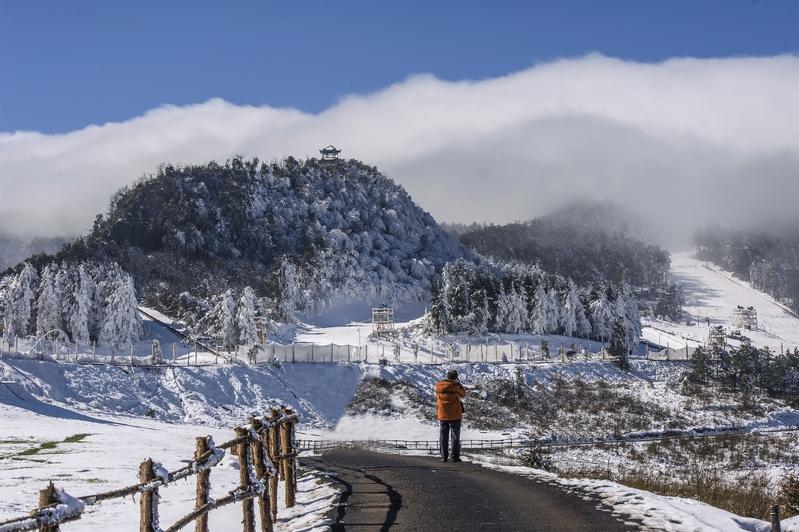 The ski resort is one of the biggest of its kind in the region and covers an area of 1.09 million square meters, including 91,700 square meters of snow tracks. It can host up to 5,000 guests at one time. The resort has rolled out Olympic-themed activities to spice up winter tourism experiences for visitors.

"Many people are coming to ski, despite the impact of the pandemic," Zhang says.

The resort received more than 1,000 people who wanted to ski on Jan 1.

Another ski resort called Yushe is about 20 minutes by car from downtown of Liupanshui. Zou Jiaqi was practicing skiing in late January there. The student from Guizhou University of Finance and Economics says he "fell for skiing" when he first tried it several years ago.

"It's great to be able to ski here without having to go to northern China," Zou says. 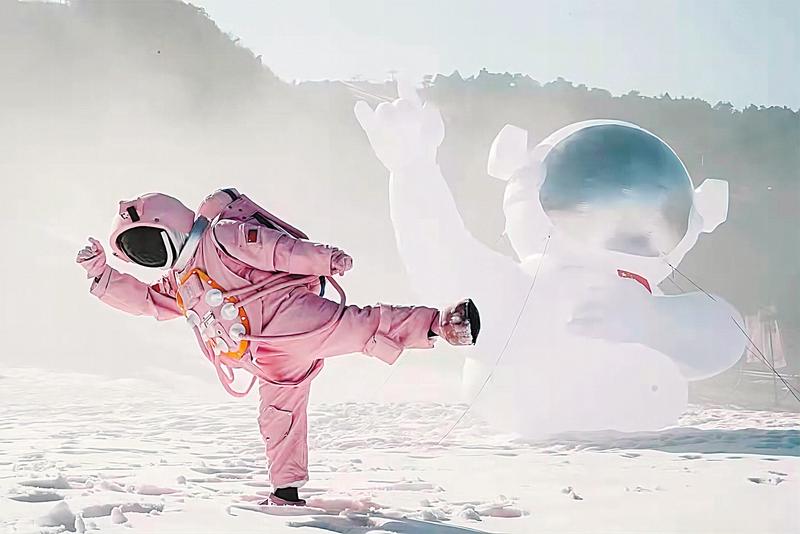 "Pink world", with its dyed snow, is a major draw at the resort. (PHOTO PROVIDED TO CHINA DAILY)

He has also started to promote winter tourism in Liupanshui with his fellow students, as they wanted to do something for the 2022 Beijing Winter Olympics Games. According to the Beijing 2022"legacy report", about 346 million people in China have participated in winter sports or ice-and-snow leisure activities since the city won the bid to host the Winter Games in 2015.That figure exceeded the preset goal of 300 million.

"Once you fall for skiing, you wouldn't give it up," says Dai Donghui, general manager of Yushe, adding that ski business has potential in the region.

The resort offers skiing, snow sightseeing and other recreational experiences, with local foods of the south. Yushe has also increased winter-fun programs for children. Snowfield roller-coaster rides and snow-tubing have been added, as well as a "pink world "with dyed snow for visitors to take photos.

The resort sits in the Yushe National Forest Park and snow covers an area of 126,000 square meters of it. Travelers can also get easy access to hot springs amid the trees and get in close touch with nature.

"We made a point of developing ski tracks for junior and intermediate players," Dai says, adding that there is a difference in skiing between the country's north and south. 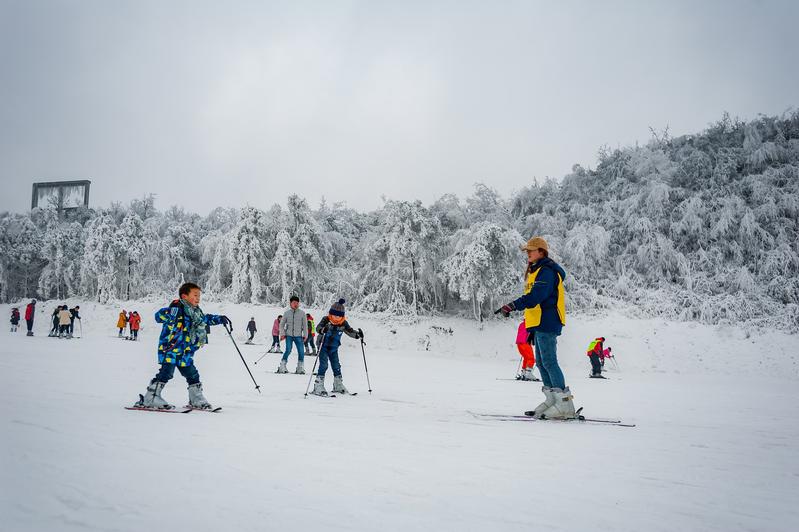 Youngsters learn to ski at the resort. (YAO YONG / FOR CHINA DAILY)

Dai adds that it's important to upgrade winter tourism in the south and combine snow activities with skiing.

This year, a winter wonderland and hot spring villas were added to the Yushe facility, and ski professionals from Northeast China's Heilongjiang province were hired to give visitors training. The Yushe resort has prepared 3,000 new ski sets that ensure better safety for visitors. The number of snowboards increased from 50 to 200 this year.

"Young people have shown a predisposition toward snowboarding, especially in the north," Dai says.

Tourist services at ski resorts in Liupanshui have expanded. Gingered sugar water, heated areas, and cafes and restaurants are in place.

"All of it is to ensure visitors can quickly recharge their batteries and have a nice stay," Dai says.

Meihuashan and Yushe ski resorts received 18,640 traveler visits during the New Year's Day holiday from January 1 to 3, up 21.5 percent over the same period last year. The improvements at the two resorts are part of Liupanshui's efforts to answer the call of the Winter Olympics. The city has invited local primary and middle school students to experience skiing for free. More than 6,000 students and faculty members have gone through some sort of basic winter sports training. To date, local authorities have arranged for more than 40,000 people to engage in winter sports.

In mid-January, the city hosted winter sports at the 11th Guizhou provincial games. It was the first time Guizhou staged such a competition, where more than 170 athletes from across the province participated in three major categories: cross-country skiing, roller skating and curling. 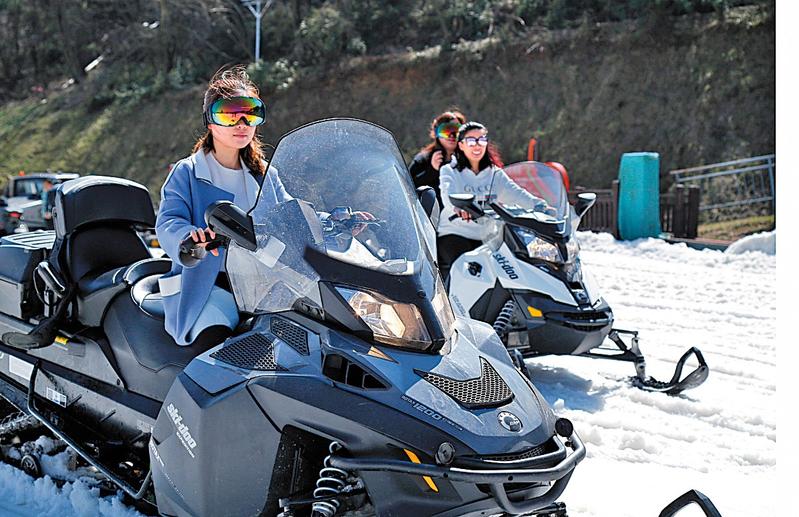 Skis are not the only means to get around at the resort. (PHOTO PROVIDED TO CHINA DAILY)

Liupanshui has tapped local winter tourism resources since 2017. The city has developed three natural ski resorts and 21 snowfields, with a total area of 630,000 square meters, according to Chen Tingting, the city's vice-mayor.

The city can take in about 15,000 people who want to ski daily. Before the focus on winter tourism, Liupanshui was known as a getaway to beat the heat and for its summer marathon. The city will keep enriching its offering of winter tourism products, featuring skiing and hot spring, according to Chen.

The authorities have also launched nine winter routes. They cover the highlights and specialties Liupanshui has to offer in winter and last from one to three days to meet different traveler needs. Local intangible culture heritage, folk events and festival celebrations have been worked into winter tourism to spice things up and add culture to winter sports.

"The hospitable Liupanshui people welcome everyone anytime to ski and bathe in hot springs with family and friends," Chen says. "They will experience considerate service and a warm winter."

Wang Jin contributed to the story.