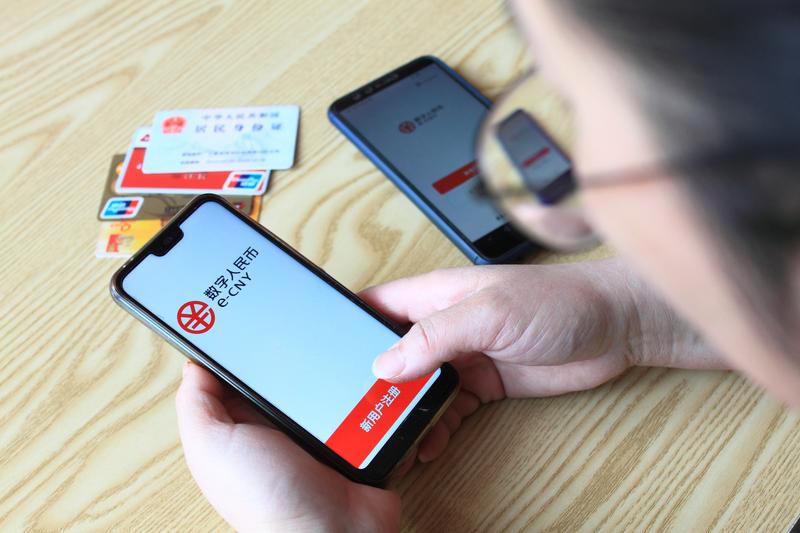 A resident in Beijing registers for an e-CNY app on her mobile phone. (PHOTO PROVIDED TO CHINA DAILY)

Red packets containing the digital yuan, or e-CNY, were distributed in several cities to boost consumption while China is taking the opportunity of Spring Festival and the Beijing Winter Olympics to further test and promote broader use of its digital currency.

In Suzhou, Jiangsu province, the Suzhou Motion Picture Association joined hands with the Suzhou branch of Industrial and Commercial Bank of China in offering discounts to some moviegoers paying with e-CNY. Started on Jan 30, the promotion will last until the end of March, offering 50,000 discounted tickets.

Xiao Taige, a Suzhou resident, said consumers are seeing an increasing number of scenarios where people can use e-CNY, and this has brought greater convenience to the virtual pay modality.

Ahead of Spring Festival, Xinjin district in Chengdu, Sichuan province, held a lottery giving residents a chance to win 26,900 red packets, each containing 66 yuan or 88 yuan worth of digital currency. The red packets are allowed for consumption at nearly 1,000 designated merchants in the district, including tourist attractions, participating restaurants and supermarkets.

Apart from the holiday, the Beijing 2022 Olympic and Paralympic Winter Games are also a great opportunity for China to further conduct e-CNY pilot programs.

Consumers are allowed to pay using e-CNY at Winter Games venues. They can use the digital yuan wallet app or hardware wallets, such as e-CNY cards and wristbands, for small value payments at merchants, contracted hotels and designated hospitals inside the Winter Games security red line, as well as merchants outside the red line posting e-CNY logos.

Some spectators are using the digital yuan to buy Bing Dwen Dwen, the mascot of the Beijing 2022 Winter Olympics, at a franchise store selling licensed products for the Games at the National Stadium when the Games kicked off with the opening ceremony on Friday.

Large internet companies are also playing an active role in promoting the use of e-CNY. Meituan, a Chinese e-commerce platform providing life services, announced on Jan 26 it has further expanded the scope of e-CNY payments to more than 200 offline consumption scenarios, including catering, fresh-food retailing, ride-hailing, hotels, tourism and entertainment.

The Beijing-based company said during its digital yuan pilot program that nearly 90 percent of its e-CNY red packets have been used in everyday consumption scenarios since January, with small-value transactions below 30 yuan making up the largest proportion of total transactions, thus promoting the growth of people's overall consumption and offline small business activity.

E-commerce giant JD has also allowed its app users to pay for products purchased from its self-operated stores with the digital yuan. Consumers will find a dedicated section on JD app showing them how to use e-CNY on the platform.

As of Dec 31, the number of scenarios of China's digital yuan pilot program had exceeded 8.08 million. A total of 261 million individual users had opened e-CNY wallets and the transaction value had reached 87.57 billion yuan, said Zou Lan, director of the Financial Market Department at the People's Bank of China, at a news conference on Jan 18.

"The PBOC will continue to steadily advance the pilot program of research and development of e-CNY according to China's 14th Five-Year Plan (2021-25), further deepen the use of the digital yuan in scenarios like retail transactions, bill payments and government services, and set goals for R&D into e-CNY serving the real economy and people's lives so that companies and individuals can realize the value of e-CNY, thus fully stimulating the enthusiasm of all parties of the industry," Zou said.