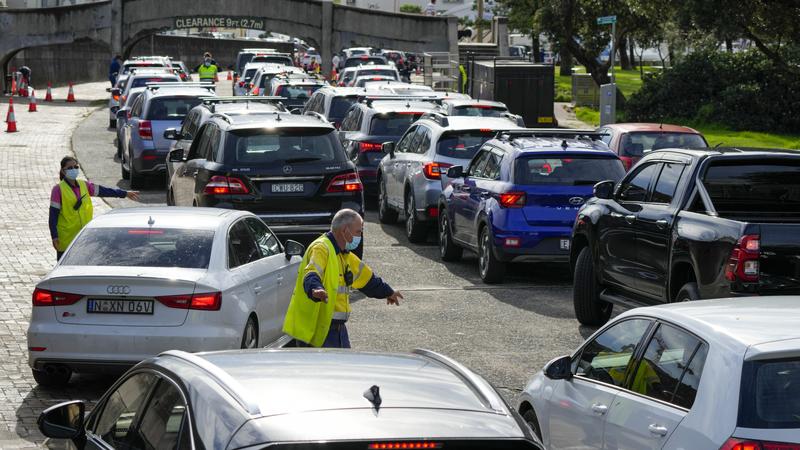 Officials reported a total of 59 deaths, down from a pandemic peak of 87 on Wednesday, with just two states still to report figures.

Hospitalizations have remained steady at around 5,000 for the last few days, peaking at just under 5,400 on Tuesday, with admissions falling for the second straight day in New South Wales, the worst-affected state.

The national cabinet, a group of federal and state leaders, is due to meet later on Thursday to discuss pandemic strategy as the retail sector calls for its workers to be added to the list of those exempt from quarantine requirements.

Workers in key industries, including health, food distribution and transport, can leave self-isolation to attend work, if they are symptom-free but that rule does not apply across the entire retail sector.

Australia's daily new cases have dropped to around 46,000, well down from a peak of around 150,000 two weeks ago. The country of 25 million has reported a total of more than 2 million infections, and 3,389 deaths.

A 10-day-old baby, an eight-year-old girl and a 13-year-old boy all with pre-existing medical conditions and all unvaccinated were among the 12 people who died from COVID-19, the Fijian Health Ministry said in its latest update.

This has increased the death toll to 96 reported by the Health Ministry so far during the third wave in Fiji.

Permanent Secretary for Health James Fong said on Thursday three of the individuals who died were below the age of 18 and were not eligible for vaccination. Two other individuals had congenital medical comorbidities from birth which contributed to the severity of their sickness and demise.

Six other people were fully vaccinated and three were unvaccinated, he said, adding that the death of the three children from COVID-19 was a sad reminder of the legacy of COVID-19.

Besides, as many as 573 deaths due to the pandemic since Wednesday morning took the total death toll to 491,700. 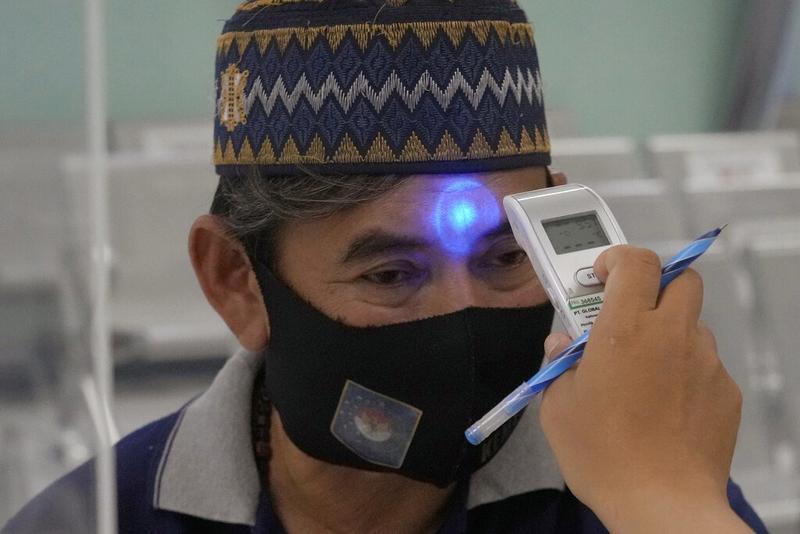 A health worker takes the body temperature of an elderly man before a booster shot of Pfizer COVID-19 vaccine during a third dose vaccination campaign at South Tangerang Regional General Hospital in Tangerang, Indonesia on Jan 24, 2022. (TATAN SYUFLANA / AP)

Indonesia on Wednesday confirmed 7,010 new COVID-19 cases, the highest single-day rise since Sept 8, 2021, amid the spread of the Omicron variant in the archipelago.

The ministry's senior official Siti Nadia Tarmizi reported on Wednesday that the total number of confirmed Omicron cases in the archipelago has increased to 1,766.

As many as 1,066 patients were confirmed as imported cases, while 449 were cases of local transmissions, she said, adding that health authorities are still identifying sources of 251 cases.

Meanwhile, 53,590 people got vaccinated against COVID-19 in the past 24 hours, bringing the total number of doses administered in the country to 9,167,113. 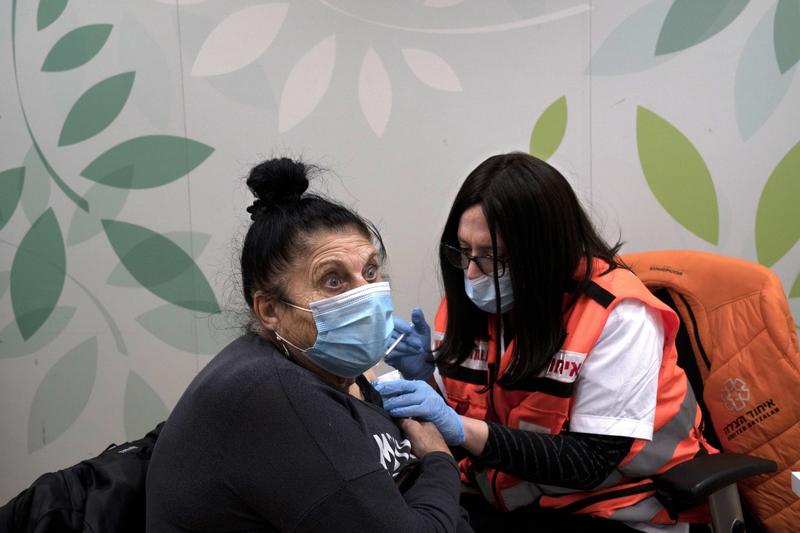 A volunteer administers a fourth dose of the COVID-19 vaccine to a woman at Clalit Health Services in Mevaseret Zion, Jerusalem, Jan 11, 2022. (MAYA ALLERUZZO / AP)

Israel on Wednesday broadened eligibility for a fourth dose of COVID-19 vaccine to include adults under 60 with underlying medical conditions, their caretakers, and others over 18 at significant risk of exposure to the coronavirus.

An official statement said the Health Ministry's director-general had approved the measure, which fell short of a recommendation on Tuesday by a ministry panel of experts to offer the so-called second booster shot to all adults.

No reason was given in the statement as to why a more restricted roll-out of a fourth dose of the Pfizer/BioNTech to people under 60 was approved.

Earlier this month, as the Omicron variant swept the country, Israel began offering the fourth jab to people over 60, on condition that at least five months have passed since they received the third or recovered from COVID-19 infection.

Those newly eligible for the fourth shot can receive it if at least four months have passed since their third dose.

Lebanon on Wednesday registered 8,639 COVID-19 infections, the highest daily cases since the outbreak of the pandemic in the country, its Health Ministry reported.

Lebanon has been continuing its vaccination campaign in hopes of reaching herd immunity and reducing the daily infections.

Myanmar reported no deaths from COVID-19 for three days in a row, according to a release from the Ministry of Health on Wednesday.

The total number of COVID-19 infections in the country has increased to 534,503 after 120 new confirmed cases with a daily positivity rate of 1.17 percent were reported in the past 24 hours, the release said.

New Zealand reported 45 new COVID-19 cases in the community on Thursday, including 34 new Omicron infections, bringing the total tally in the country's current community outbreak to 11,601.

To date, there are 90 community cases of COVID-19 that are either confirmed as Omicron variant or have been linked to previously reported Omicron case, an increase of 34, according to the Ministry of Health.

Many of additional cases have previously been reported as COVID-19 cases and linked retrospectively either through whole genome sequencing or epidemiologically. Therefore, many are not included in Thursday's reported new COVID-19 community cases, the ministry said in a statement.

"It is the largest shipment of vaccine doses that are shipped to the Gaza Strip which will help to combat the current wave of COVID-19 that had significantly increased in the last couple of days," Gaza Health Ministry official Mahmoud Hammad told reporters at the crossing point between southern Gaza and Egypt.

Up to 7,750 new cases were registered in the Palestinian territories in the past 24 hours, the Palestinian Ministry of Health in the West Bank said in a statement on Wednesday, noting it is the highest figure of daily infections since the first case was recorded in March 2020.

The Philippines' Department of Health (DOH) reported 18,191 new COVID-19 infections on Thursday, raising the number of confirmed cases in the Southeast Asian country to 3,493,447. 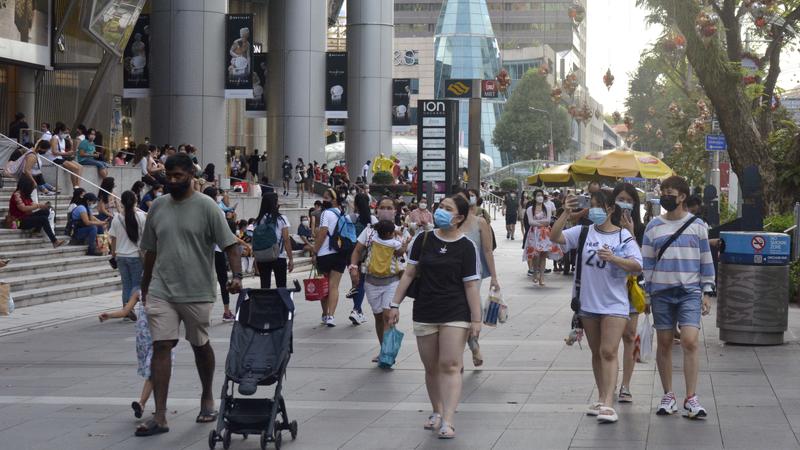 Of the new cases, 1,836 were detected through PCR (polymerase chain reaction) tests and 2,996 through ART (antigen rapid test), according to statistics released by the Ministry of Health.

South Korea's daily number of COVID-19 cases hit a new record high due to the spread of the Omicron variant, the health authorities said Thursday.

According to the Korea Disease Control and Prevention Agency, the country reported 14,518 more cases of COVID-19 for the past 24 hours, raising the total number of infections to 777,497.

The daily caseload was up from 13,010 the previous day, keeping a record-breaking trend for the third consecutive day. 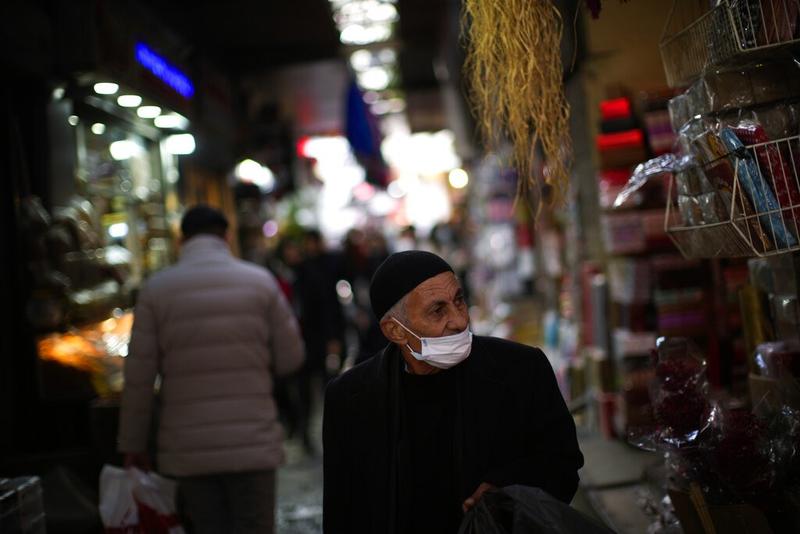 A man wearing a mask to prevent the spread of the COVID-19 walks along an alley in a commercial area in Istanbul, Turkey on Jan 18, 2022. (FRANCISCO SECO / AP)