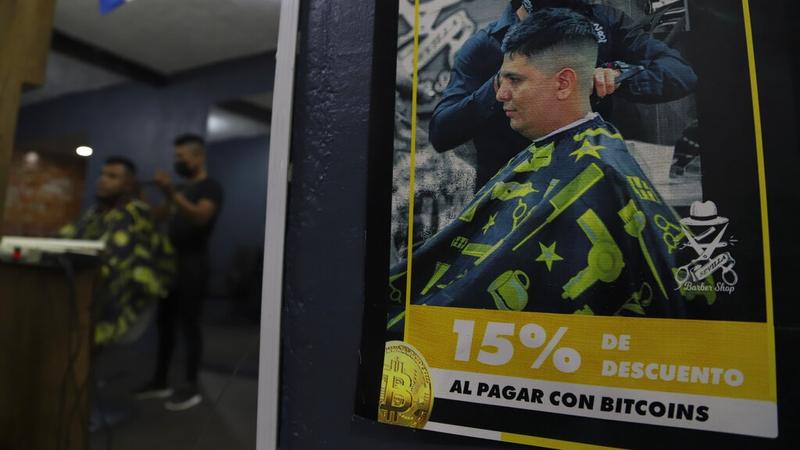 A poster inside a barber shop shows customers can enjoy discounts if they pay with bitcoin, in Santa Tecla, El Salvador, Sept 4, 2021. (SALVADOR MELENDEZ / AP)

IMF executive directors stressed that "there are large risks associated with the use of bitcoin on financial stability, financial integrity, and consumer protection, as well as the associated fiscal contingent liabilities," the board said in a statement after a consultation with El Salvador.

There are large risks associated with the use of bitcoin on financial stability, financial integrity, and consumer protection, as well as the associated fiscal contingent liabilities.

executive board of International Monetary Fund

"They urged the authorities to narrow the scope of the bitcoin law by removing bitcoin's legal tender status. Some directors also expressed concern over the risks associated with issuing bitcoin-backed bonds," according to the statement.

The IMF also warned that under current policies, El Salvador's public debt is expected to rise to about 96 percent of gross domestic product in 2026 "on an unsustainable path."

"Directors generally agreed on the need to implement a fiscal consolidation starting this year based on high-quality revenue and spending measures to restore fiscal sustainability and put public debt on a firm downward trajectory," the IMF said.

El Salvador became the first country to formally adopt bitcoin as legal tender in September last year. Local polls showed that Salvadorans were wary about the volatility of the cryptocurrency, and some criticized it for its potential for illegal use, such as laundering money or financing terrorism.