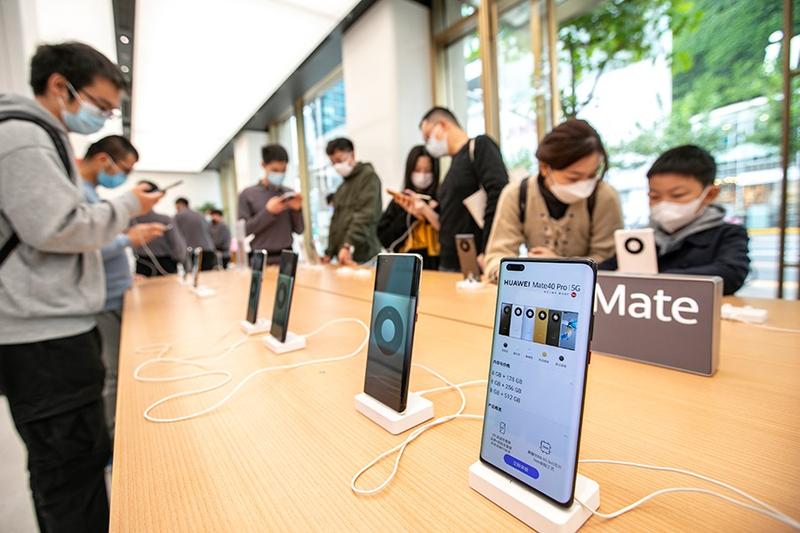 Household consumption will continue to be the mainstay of China's strong economic growth this year, a recent report said.

According to a report from the Central Asian Regional Economic Cooperation Institute, or CAREC Institute, some sectors of the Chinese economy, such as consumption, developed better than the others, and the strong growth momentum will continue to bolster the country's economic revival.

It is expected that there will be an increase in demand for high-tech products such as communication equipment, cosmetics, gold, silver and jewelry, which all grew by double digits in the fourth quarter on a yearly basis.

Hans Holzhacker, chief economist of the institute, said China's economic achievements in 2020 reiterated the country's need to have a more consumption-based growth model. Household expenditures fell by nearly 4 percent last year on a yearly basis due to the COVID-19, indicating huge growth potential this year.

"Specifically, it is expected that there will be an increase in demand for high-tech products such as communication equipment, as well as for cosmetics, gold, silver and jewelry, which all grew by double digits in the fourth quarter on a yearly basis. When the pandemic will finally come under control globally, consumption in services such as tourism will be in high demand," he said.

Data from the Ministry of Commerce said that in 2020, China's retail sales of consumer goods totaled 39.2 trillion yuan (US$6 trillion), down 3.9 percent on a year-on-year basis, which was 7.5 percentage points lower than the yearly declining rate of that of the first half of the year.

"Last year, the country's retail sales of consumer goods took up 54.3 percent of the gross domestic product, remaining the bedrock of the stable operation of national economy," said Qian Keming, vice-minister of commerce, during an earlier press conference.

According to the ministry, amid challenges brought by COVID-19, commodity consumption in 2020 had been recovering month by month. Specifically, retail sales of communication equipment and cosmetics surged by 12.9 percent and 9.5 percent year-on-year, respectively.

Meanwhile, service consumption also revived. In the fourth quarter, retail sales in the catering industry grew by 0.2 percent on a yearly basis, said the ministry.

Cheng Shi, chief economist at ICBC International Holdings Ltd, believes that the accelerated recovery in household consumption will further strengthen the endogenous growth momentum of the Chinese economy. "It will boost the recovery and stable operation of the economy for the whole year."

China's effective contagion control measures in the second half of last year helped restore economic momentum in the country and people's livelihoods. Data from the National Bureau of Statistics showed that the surveyed urban unemployment rate was 5.2 percent in December, unchanged from the same period in 2019. Nearly 11.86 million new urban jobs were created in 2020, exceeding the average annual growth target under normal conditions between 2017 and 2019.

"The recovery trend may weaken the precautionary savings habit of people, while maintaining the upward trend of consumption that began in August," Cheng said.

ICBC International said in a recent report that household consumption would be one of the major driving forces for China's economic growth in the first and second quarters.

"It will return to moderate levels on a quarterly basis, till the annual growth rate settles around 9.2 percent," said the report.

Cheng, however, said that the global economy is still facing changes unseen in a century. As a result, short-term variations and long-term transitions could occur at the same time, and the turbulence and complexity of economic signals are even worse than that of last year, he said.

"Economists and financial market participants are not experts in the public health sector. Therefore, their forecast about the economy may tend to be more optimistic than realistic," he said.

According to ICBC International, the global economy will remain complex and see constant changes this year, with downside risks greater than upside risks.

The breakthrough point for the global economy will occur when the pandemic shows an obvious turning point, said Cheng.

"It is COVID-19 itself that determines the global economy trend in 2021 or even further. Before the pandemic really gets under control, all optimistic forecasts should get a question mark," Cheng said.