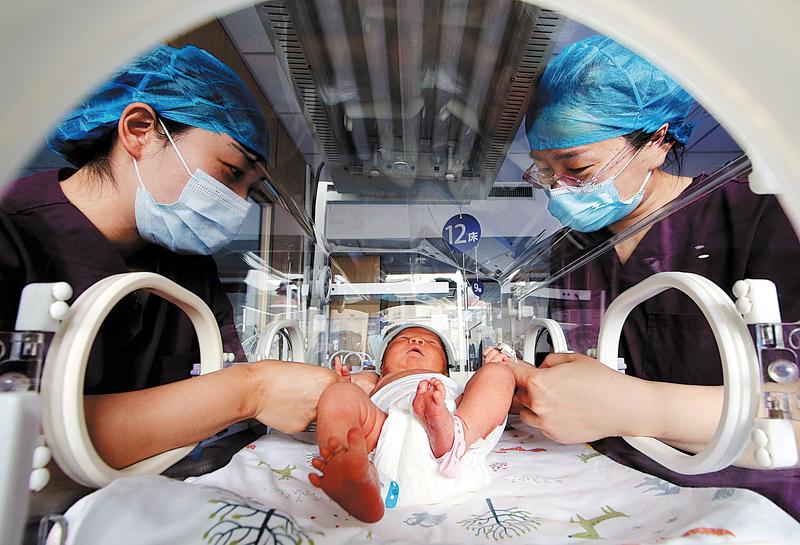 Doctors check the health of a newborn baby in Handan, Hebei province, in May. (HU GAOLEI / FOR CHINA DAILY)

When she heard that her maternity leave would be extended by one month in late November, Tang Xiaoyu, who has a 5-month-old baby, said the news made her "as happy as winning the lottery".

"I was just preparing to go back to work the following week," she said. "The new policy meant that I was able to rest at home and take care of my baby myself for another 30 days."

The 32-year-old works in the human resources department of an internet company in Beijing. Previously, new mothers like her were usually entitled to 128 days of paid maternity leave.

On Nov 26, lawmakers in Beijing passed the city's revised family planning and population regulations. One of the highlights was that maternity leave would be extended by 30 days.

Moreover, new mothers can now take additional maternity leave of one to three months if their employer agrees, and both mother and father can have five days of child care leave every year until their child reaches the age of 3.

"I read about the new policy in the news, but I did not expect it to take effect so quickly," Tang said. 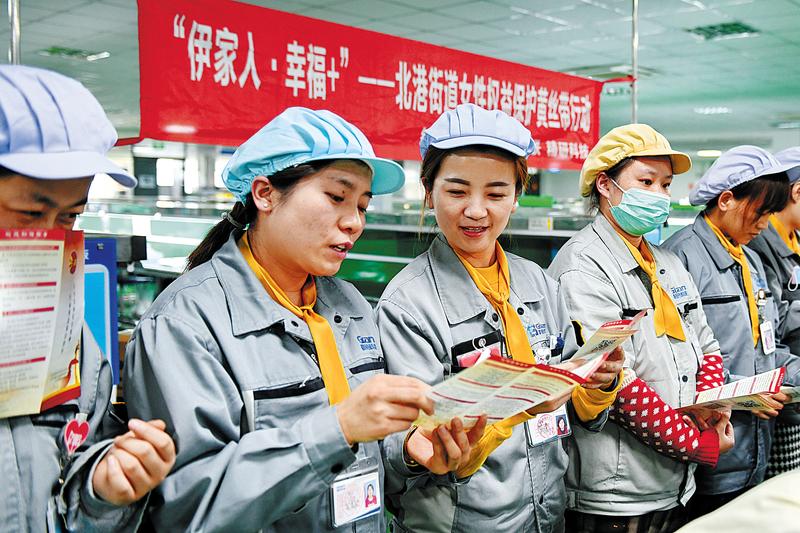 Women discuss their pregnancy and motherhood rights at a factory in Changzhou, Jiangsu province, in November. (SHI KANG / FOR CHINA DAILY)

Beijing is one of about 20 provincial-level entities that have decided to extend maternity leave or add parental leave to their newly revised family planning regulations.

After the adoption of the third-child policy in August, the extra measures were rolled out as part of moves to ease the burden of having a newborn and also to encourage families to have more children.

Some regions have formulated more-detailed plans. For instance, in the eastern province of Zhejiang, new mothers of an only child are entitled to an additional 60 days of maternity leave, while those with a second or third child can take 90 more days, according to the province's revised family planning regulations published in November. 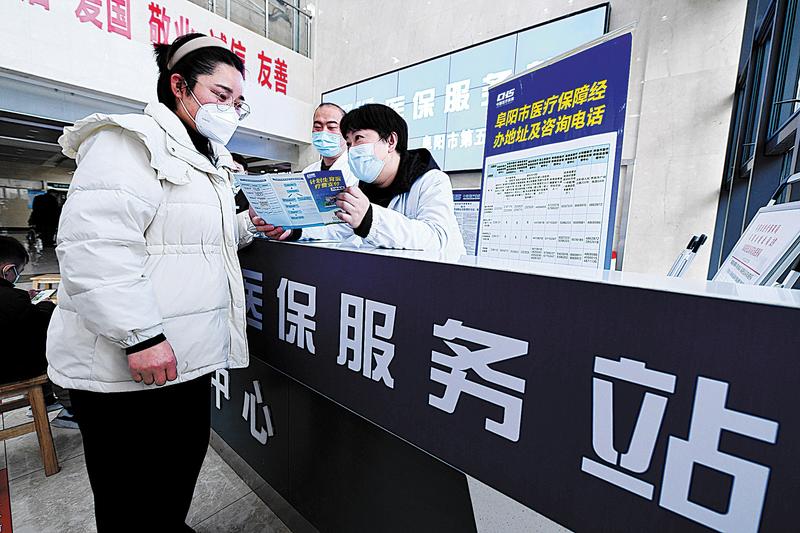 "The new policies also convey a clear message that the burden of caring for babies should not solely fall on women, and fathers are encouraged to shoulder more responsibility in rearing children."

Su Yilin, mother of a 2-year-old girl in Shanghai, said her husband has taken the new five-day leave because the family's nanny has taken time off ahead of the Chinese New Year holiday, which falls at the start of next month.

"I know my schedule will be hectic during that period, so it's a big relief that he is willing to step up and care for the baby," Su said.

Mu Guangzong, a professor at Peking University's Institute of Population Research, said that the extension of maternity leave in several regions is a significant move toward building a "fertility friendly" society.

"Local governments should pay attention to the demands of businesses and consider allocating public funds to make up for their losses." 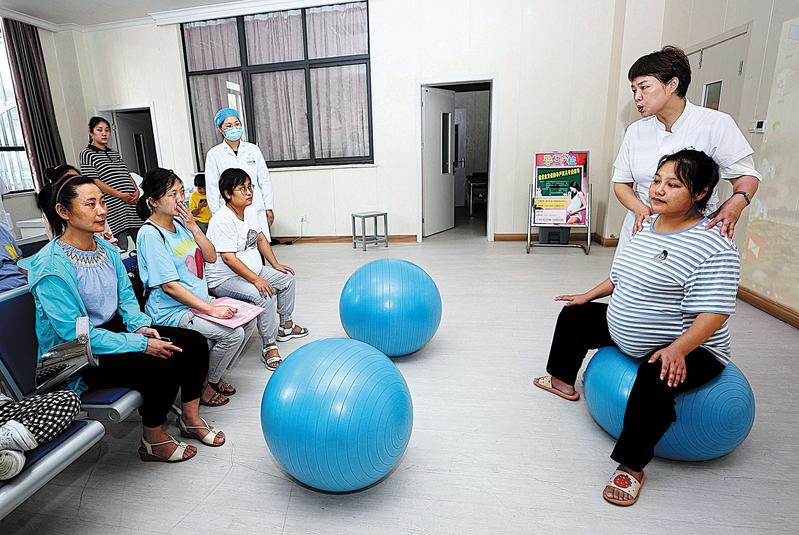 Pregnant women do yoga with an instructor in Quanjiao county, Anhui, in July. (SHEN GUO / XINHUA)

Despite the revised rules, some experts said that without solid backing from authorities, such new policies could even deepen gender discrimination in the workplace.

Song Tianjiao, who is looking for a job in Beijing, said she was asked about her marital status and childbearing plans at several job interviews. In one extreme case, she was asked to pledge that she would not get pregnant for two years after starting the job.

"In such an environment, will the extension of maternity leave make it harder for women to find a job?" she said.

Chen Xia, a researcher with the Institute of Philosophy at the Chinese Academy of Social Sciences, said that such concerns are reasonable, and the current dilemma is that the costs of favorable fertility policies are shouldered almost totally by employers.

She added that a range of measures－such as issuing fertility allowances (for families), granting tax exemptions (for employers) and promoting gender equity－could be used to spread such costs among different sectors of society.

Meanwhile, experts have called for stronger efforts to boost nursery services for children age 3 and younger. 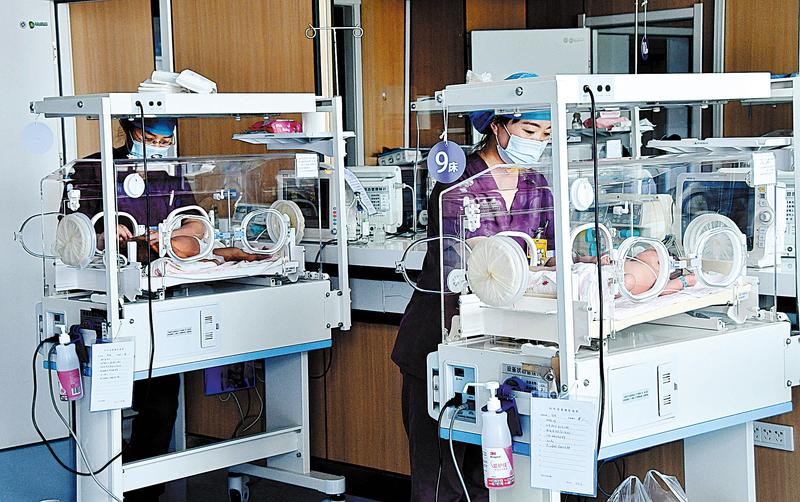 Nurses take care of newborn babies at a hospital in Handan, Hebei province, in May. (HU GAOLEI / FOR CHINA DAILY)

Yang Wenzhuang, director of the National Health Commission's Population Surveillance and Family Development Department, said there are about 40 million children age 3 and younger nationwide, but only 6 percent are estimated to be enrolled in nurseries.

"Even in urban areas, the rate is less than 10 percent, far lower than the 25 to 55 percent in developed countries," he said.

"The nursery care sector is a notable shortcoming in the government's efforts to ensure people's livelihoods. A lack of resources to take care of babies is also a major factor that will affect the third-child policy."

In October, 23 government departments, including the National Development and Reform Commission, released a guideline that said more public funds and support will be offered to build affordable nursery care institutions across the country.

The center, open from 8 am to about 5 pm, provides a number of services for babies, from health checkups to light workouts.

"The establishment of such a child care center close to residential communities will greatly ease the burden of child care on parents," Wang Na, a resident and mother of a 2-year-old boy, told local media.