Japan 'to widen virus quasi-state of emergency to 30 prefectures'

People wearing face masks to help protect against the spread of the coronavirus walk on a street lined with bars and restaurants in Tokyo on Jan 19, 2022. (KOJI SASAHARA / AP)

Following Japanese Prime Minister Fumio Kishida holding talks with necessary Cabinet ministers later in the day regarding the latest prefectures requesting to be placed under the COVID-19 emergency measure, a formal decision on the matter will likely be announced Tuesday, informed sources said.

"We will respond with well-balanced measures based on the nature of the Omicron strain by enhancing the procedural flow of prevention, detection and early treatment," Kishida told a lower house budget committee session on Monday.

The final decision will come after the government holding talks with its advisory panel of virus experts, who, after green-lighting the plan, will likely allow more prefectures to take more stringent anti-virus measures along with the 16 prefectures already under the virus emergency measure as of Monday.

The move comes after nationwide COVID-19 cases surged to a record 54,576 on Saturday as the highly-transmissible Omicron virus variant continues to wreak havoc up and down the country. 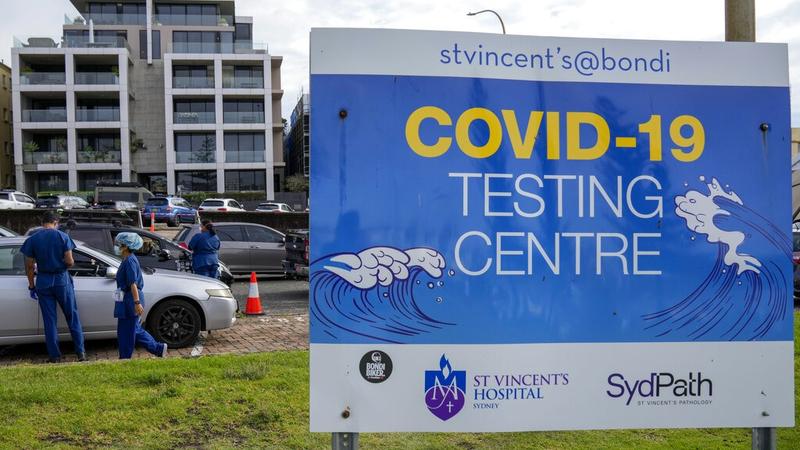 Australia recorded another surge of COVID-19 deaths on Monday as an outbreak of the highly contagious Omicron variant peaked, and authorities warned numbers could rise further when schools return from end-of-year holidays next week.

Authorities say a rollout of a vaccine booster will reduce deaths, and point to a stabilization in hospitalization numbers as a sign the flare-up has reached its worst.

The country on Monday reported 56 deaths, most of them in its three most populous states - New South Wales, Victoria and Queensland - slightly down from the previous day's count of 58 but still among the highest of the pandemic.

The total number of new cases, 37,754, was well below peaks three times that amount earlier this month, although four other states and territories were yet to report figures.

"Our assessment indicates that the spread of COVID virus is slowing, our situation is stabilzing and while we expect to see an uptick in transmissions associated with schools going back this could be mitigated by the actions of you as individuals," NSW Chief Health Officer Kerry Chant told a news conference.

More than nine in 10 Australians aged over 12 have had two doses of coronavirus vaccine - a statistic health experts say has kept the country's death rate relatively low - but far fewer have had a third dose which is seen as a guard against Omicron.

Meanwhile, Australia approved the Novavax vaccine for people aged 18 and over on Monday, making it the fourth COVID-19 vaccine to be approved for use in Australia after AstraZeneca, Moderna and Pfizer.

The Australian Technical Advisory Group on Immunization (ATAGI) has recommended the Novavax vaccine be given in two doses, at least three weeks apart.

The government has ordered 51 million doses of the Novavax COVID-19 vaccine to be available in February, Health Minister Greg Hunt said. 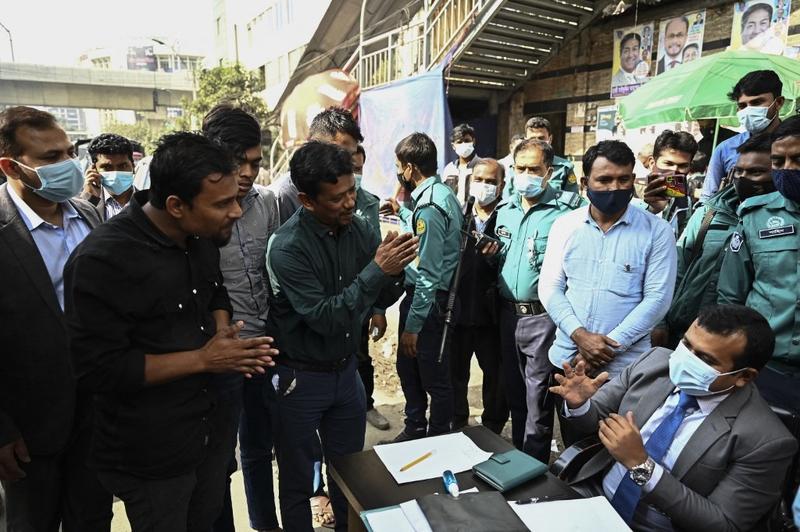 Commuters (left) gesture to a magistrate after being stopped and fined by policemen while outdoors without a facemask, along a street in a mobile court in Dhaka on Jan 13, 2022. (MUNIR UZ ZAMAN / AFP)

The Omicron variant of COVID-19 is driving a huge spike in fresh infections in Bangladesh, a senior official said Sunday.

Nazmul Islam, a spokesman for the Directorate General of Health Services (DGHS), told reporters, "A huge spike in infections is being driven by the Omicron variant of COVID-19, which is gradually replacing Delta in the country."

Also, he said 60 percent of the patients have sore throat and 44 percent have cough.

Cambodia had seen zero deaths from the COVID-19 for 20 days straight, the country's health ministry said in a statement on Monday.

According to the health ministry, the number of confirmed Omicron COVID-19 variant cases in Cambodia has risen to 625 after 40 new infections were detected.

"Among the new cases, 15 were imported and 25 were locally transmitted," the ministry added.

Vice-President of India Venkaiah Naidu speaks during the opening ceremony of the 50th Union World Conference on Lung Health, in Hyderabad on Oct 30, 2019. (NOAH SEELAM / AFP)

Following the test, Naidu isolated himself for a week in Hyderabad, the capital city of the southern state of Telangana. Naidu was in Hyderabad when he tested positive.

Naidu appealed to all those who came into his contact to isolate themselves and also get tested.

The number of pandemic cases has been on the rise over the past couple of weeks in India.

This is the fourth consecutive day that over 300,000 new cases were registered in a day in more than eight months. 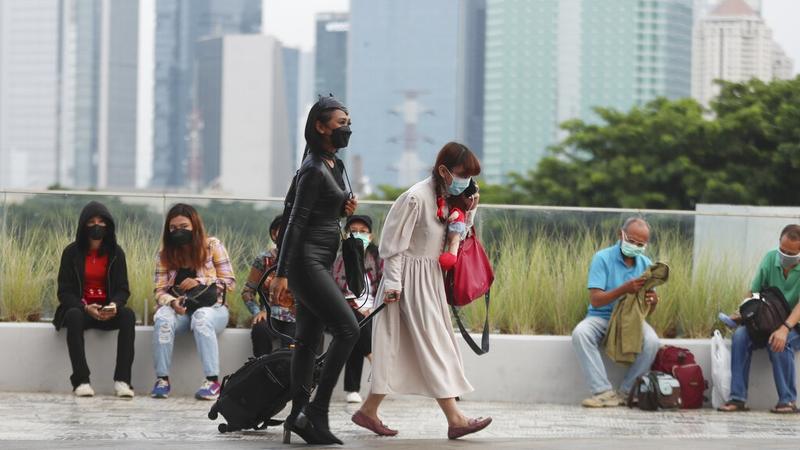 People wear face masks the help protect against the coronavirus along a skywalk in Jakarta, Indonesia on Dec 30, 2021. (ACHMAD IBRAHIM / AP)

Indonesia opened up two islands close to Singapore to visitors from the city-state on Monday, officials said, as part of calibrated moves to reboot its tourism sector while controlling the spread of COVID-19.

Singaporeans can visit Batam and Bintan islands approximately 15 km and 30 km away respectively providing they are vaccinated against COVID-19, they undergo tests and have insurance coverage, authorities said.

The two islands were hugely popular vacation spots among Singaporeans prior to the pandemic.

The move follows Indonesia's reopening of its holiday island Bali to foreign tourists in October.

It was not immediately clear how the arrangement will be implemented in both countries.

Singapore has made no announcement of the sea route reopening and its transport authority did not immediately respond to a request for comment on Monday.

A fourth dose of COVID-19 vaccine given to people over 60 in Israel made them three times more resistant to serious illness than thrice-vaccinated people in the same age group, Israel's Health Ministry said on Sunday.

The ministry also said the fourth dose, or second booster, made people over 60 twice as resistant to infection than those in the age group who received three shots of the vaccine.

A preliminary study published by Israel's Sheba medical centre last Monday found that the fourth shot increases antibodies to even higher levels than the third but "probably" not to the point that it could completely fend off the highly transmissible Omicron variant.

Israel began offering a fourth dose of the Pfizer/BioNtech vaccine to people over 60 earlier this month as Omicron swept the country.

The ministry said on Sunday the study it conducted with several major Israeli universities and the Sheba centre compared 400,000 people over 60 who received the second booster with 600,000 people in the age group who were given a third shot more than four months ago.

As elsewhere, Israel has seen COVID-19 cases spiral due to Omicron. But it has logged no deaths from the variant.

The COVID-19 vaccination campaign in Laos has achieved good results last year, but due to the ongoing pandemic and remaining challenges, more lessons are to be learned to ensure a larger segment of the population get vaccinated in 2022.

The government has achieved its goal to vaccinate at least 50 percent of the population by the end of 2021, bringing the virus outbreak under control.

Local daily Vientiane Times on Monday quoted Phonepaseuth Ounaphom, director general of the Department of Hygiene and Health Promotion under the Lao Ministry of Health, as saying that the government urged people in all at-risk groups to come forward and be vaccinated to minimize the impacts on people's health and the economy.

The Ministry of Health has instructed authorities to set up more vaccination centers at community dispensaries and in villages to provide easier access for local people.

"We made good progress last year under the National Deployment and Vaccination Plan. Large numbers of people in priority groups have been fully vaccinated, including children aged 12 and over, pregnant women, and essential workers such as school teachers," Phonepaseuth said. 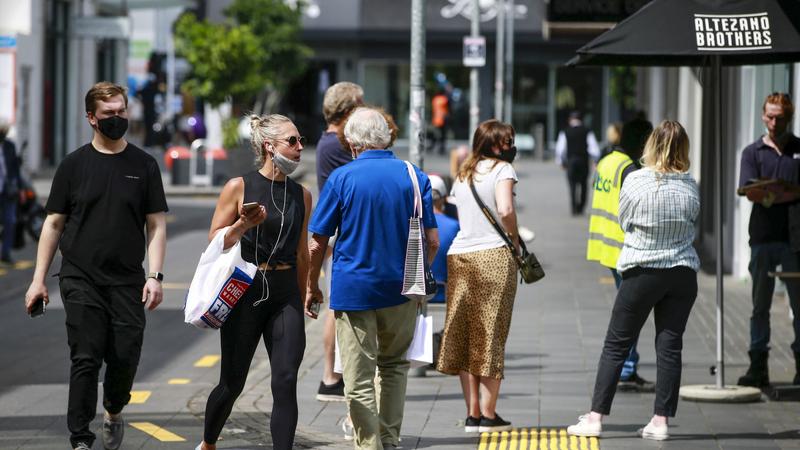 Among the eight Omicron cases, two are in the Nelson/Tasman region and are contacts of existing cases, five cases are in the largest city Auckland linked to one of the reported family events, and there is an additional case in Palmerston North, a household contact who was already isolating and linked to the previously reported Palmerston North Omicron case, said the Ministry of Health.

The Philippines' Department of Health (DOH) reported 24,938 new COVID-19 infections on Monday, raising the number of confirmed cases in the Southeast Asian country to 3,442,056.

The DOH said the number of active cases dropped to 262,997, as the country's positivity rate also dipped to 40.6 percent.

The DOH added that 47 more people died from COVID-19 complications, pushing the country's death toll to 53,519.

Of the new cases, 2,007 cases were detected through PCR (polymerase chain reaction) tests and 1,489 through ART (antigen rapid test) tests, according to statistics released by the Ministry of Health. 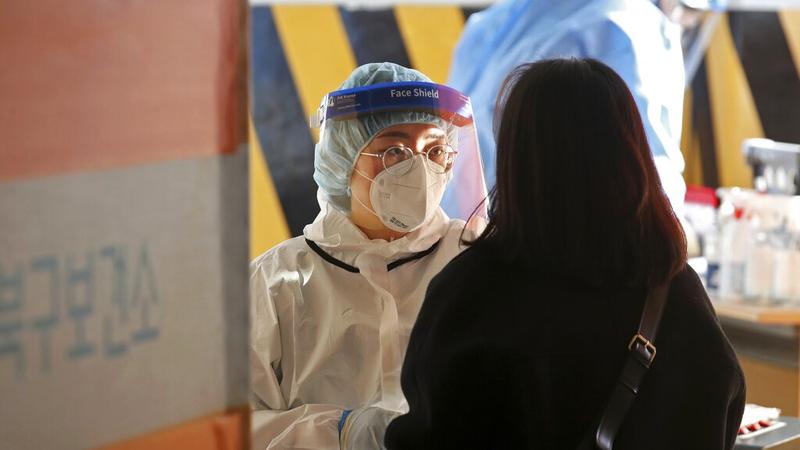 A medical worker wearing protective gear takes a sample from a woman at a temporary screening clinic for the coronavirus in Gwangju, South Korea, on Jan 3, 2022. (JO NAM-SU / YONHAP VIA AP)

The country recorded 7,630 new cases on Saturday, the Korea Disease Control and Prevention Agency (KDCA) said, above the 7,009 cases reported a day earlier and near the mid-December record of 7,848 logged.

South Korea in mid-January extended tougher social distancing rules for three weeks, including a 9 pm curfew for restaurants, cafes and bars, and limits on private gatherings, ahead of the holiday that starts on Saturday.

South Korea has recorded 733,902 COVID-19 infections and 6,540 deaths, KDCA data showed, although nearly 95 percent of adults have been fully vaccinated and more than half having received a booster shot.

To contain the rapid spread of the virus, health officials have required proof of vaccination and a booster to gain access to most public facilities, but a court ruled that large shops and teenagers should be temporarily excluded from COVID-19 vaccine pass mandates.

Meanwhile,  South Korea registered a total of 212,459 breakthrough COVID-19 infections, which refer to the vaccinated people who were infected with the virus, up from 199,749 a week earlier, the KDCA said Monday. 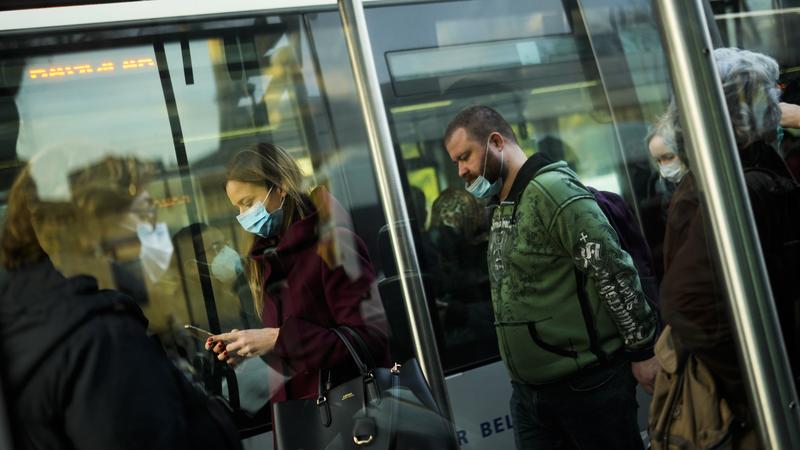 Commuters, wearing protective face masks to prevent the spread of COVID-19, get out of a streetcar in Istanbul, Turkey, Dec 27, 2021. (FRANCISCO SECO / AP)

The three patients included a woman who recently entered Vietnam from the United States and her two infected contacts, the news agency cited Nguyen Van Vinh Chau, deputy head of the HCMC health department, as saying.