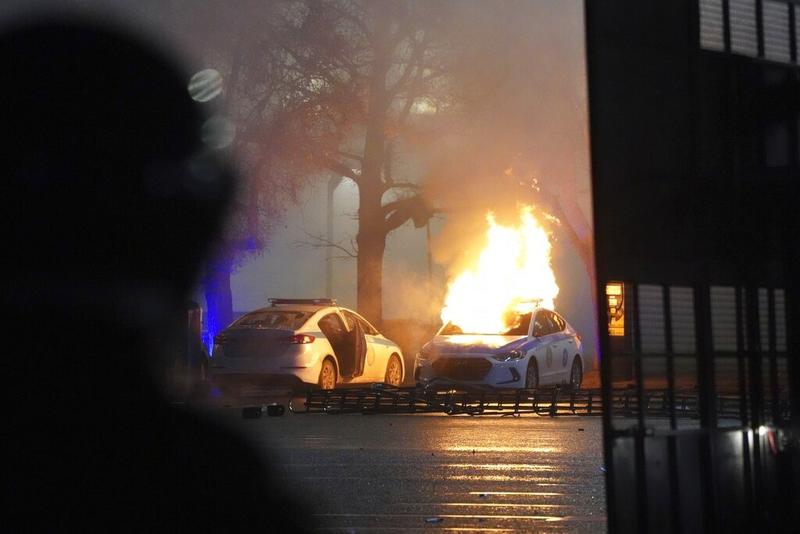 A police vehicle is on fire amid protests in the center of Almaty, Kazakhstan, Jan 5, 2022. (VLADIMIR TRETYAKOV/AP)

ALMATY - A Russia-led security alliance of ex-Soviet states will send peacekeeping forces to Kazakhstan, Armenia's prime minister said on Thursday, after the Kazakh president appealed for their help in quelling violent and deadly protests.

Armenian Prime Minister Nikol Pashinyan said on Facebook that an unspecified number of peacekeepers would go to Kazakhstan for a limited period to stabilize the situation after state buildings were torched and the Almaty international airport was seized.

Eight police and national guard troops were killed in the unrest on Tuesday and Wednesday, Russia's state-owned Sputnik agency quoted the Kazakh interior ministry as saying on Wednesday. Russian news agencies, quoting Kazakh media, later said two soldiers had also been killed in what they described as an anti-terrorist operation at Almaty airport. 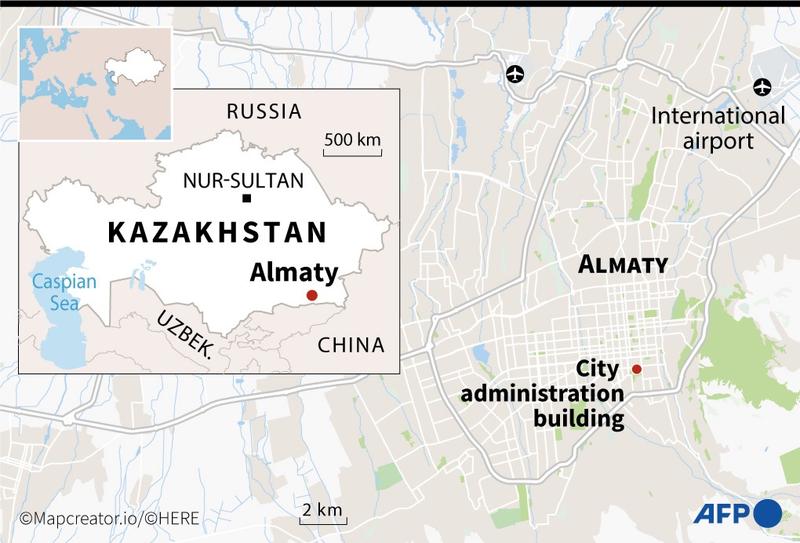 Initially sparked by anger at a fuel price rise, the protests have quickly spread to take in wider opposition to President Kassym-Jomart Tokayev's predecessor Nursultan Nazarbayev, who retained significant power despite quitting in 2019 after a nearly three-decade rule.

The Central Asian nation's reputation for stability under Nazarbayev helped attract hundreds of billions of dollars of foreign investment in its oil and metals industries.

But a younger generation is demanding the liberalization seen in other former satellite states of the Soviet Union. The protests are the worst in Kazakhstan - a country five times the size of France with a population of nearly 19 million people - in over a decade.

Apparently seeking to appease public ire, Tokayev sacked Nazarbayev, 81, as head of the powerful Security Council on Wednesday, and took it over himself. He also appointed a new head of the State Security Committee, successor to the Soviet-era KGB, and removed Nazarbayev's nephew from the No 2 position on the committee. 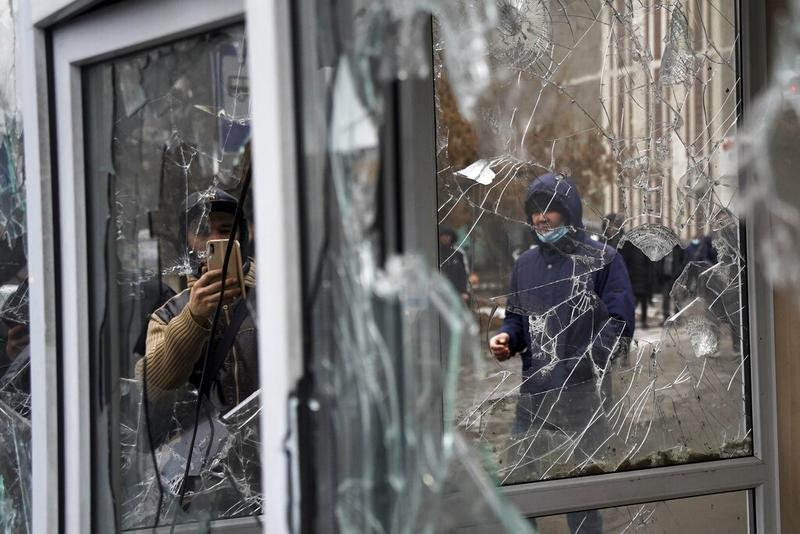 A man takes a photo of the windows of a police kiosk damaged by demonstrators during a protest in Almaty, Kazakhstan, Jan 5, 2022.  (VLADIMIR TRETYAKOV/AP)

But protests continued, with demonstrators taking control of the airport in Almaty, Kazakhstan's biggest city, a source familiar with the matter told Reuters. Flights were canceled.

Interfax quoted an official as saying the airport had subsequently been cleared of protesters. Reuters was not able to independently confirm the report.

Earlier, riot police used teargas and flash grenades against protesters in Almaty but then appeared to withdraw.

In the early hours of Thursday, in his second televised speech within hours, Tokayev said that he had appealed for help to the Collective Security Treaty Organization, a military alliance of Russia, Armenia, Belarus, Kazakhstan, Kyrgyzstan, and Tajikistan.

He said foreign-trained "terrorist" gangs were seizing buildings, infrastructure and weapons, and had taken five aircraft, including foreign ones, at Almaty airport.

"It is an undermining of the integrity of the state and most importantly it is an attack on our citizens who are asking me... to help them urgently," Tokayev said.

"Almaty was attacked, destroyed, vandalized, the residents of Almaty became victims of attacks by terrorists, bandits. Therefore it is our duty... to take all possible actions to protect our state."

Russian news agencies quoted Dmitry Rogozin, head of the Russian space agency Roscosmos, as saying security had been strengthened around key installations at the Baikonur Cosmodrome in Kazakhstan, which Russia uses for space launches. 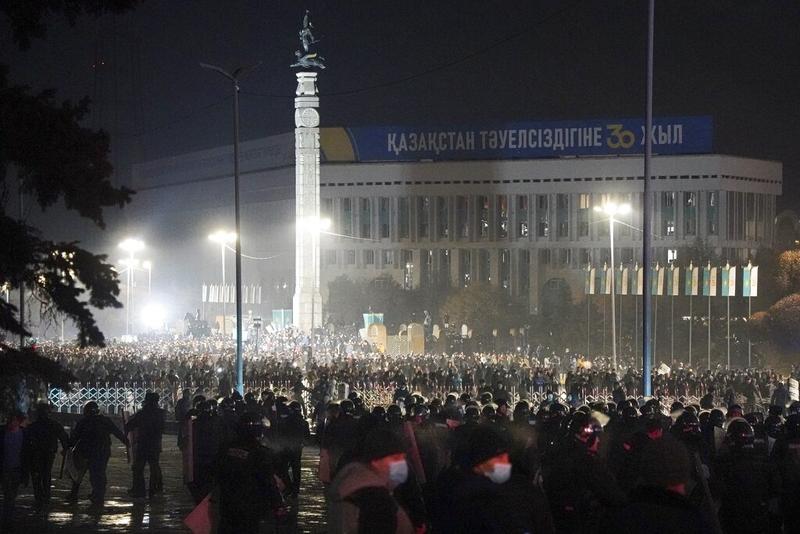 A resident of Almaty who mingled with the protesters on Wednesday said most of those he met appeared to come from the city's impoverished outskirts or nearby villages.

At the main square, vodka was being distributed and some people were discussing whether to head towards the city bazaar or a wealthy area for possible looting, the resident said.

"There is complete anarchy in the street," he said.

Footage posted on the internet showed protesters chanting below a giant bronze statue of Nazarbayev, strung with ropes in an apparent attempt to pull it down. A woman who posted it said it was filmed in the eastern city of Taldykorgan.

Early on Wednesday, Reuters journalists had seen thousands of protesters pressing towards Almaty city center, while in the city of Aqtobe, protesters gathered shouting: "Old Man, go away!" A video online showed police using water cannon and stun grenades near the mayor's office.

States of emergency were declared in Nur-Sultan, Almaty, and westerly Mangistau province. The internet was shut down.

After accepting the Cabinet's resignation, Tokayev ordered acting ministers to reverse the fuel price rise, which doubled the cost of liquefied petroleum gas widely used for vehicles in Kazakhstan.

The Kremlin has said it expected Kazakhstan, a close ally, to quickly resolve its internal problems, warning other countries against interfering. White House press secretary Jen Psaki said Russian accusations that the United States had instigated the unrest were false.