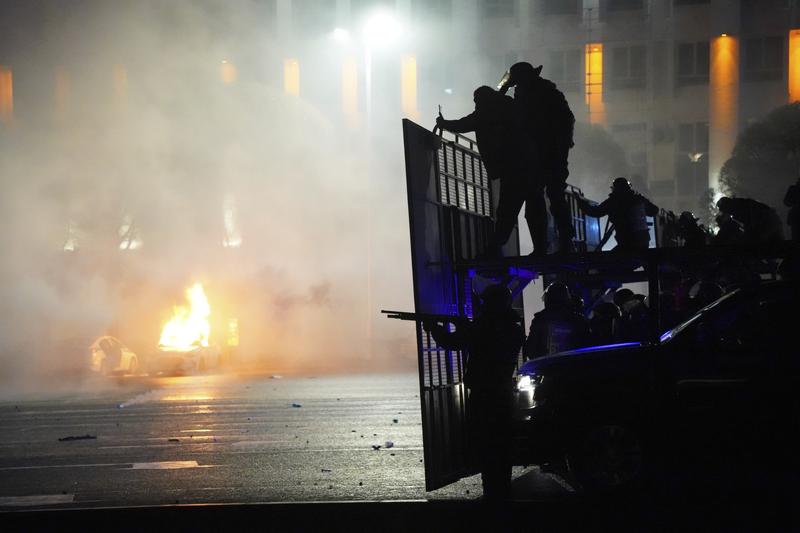 A police car is on fire as riot police prepare to stop protesters in the center of Almaty, Kazakhstan, Jan 5, 2022. (VLADIMIR TRETYAKOV / AP)

ALMATY - Kazakh President Kassym-Jomart Tokayev accepted the government's resignation on Wednesday, his office said, after a fuel price increase in the oil-rich Central Asian country triggered protests in which nearly 100 police were injured.

Police used tear gas and stun grenades late on Tuesday to drive hundreds of protesters out of the main square in Almaty, the former Soviet republic's biggest city, and clashes resumed on Wednesday.

The protests shook the former Soviet republic's image as a politically stable and tightly-controlled nation - which it has used to attract hundreds of billions of dollars of foreign investment into its oil and metals industries over three decades of independence.

The protests began in Mangistau province on Sunday following the lifting of price caps on liquefied petroleum gas, a popular car fuel, a day earlier, after which its price more than doubled.

Speaking to acting cabinet members on Wednesday, Tokayev ordered them and provincial governors to reinstate LPG price controls and broaden them to gasoline, diesel and other "socially important" consumer goods.

Speaking to acting cabinet members on Wednesday, Tokayev ordered them and provincial governors to reinstate LPG price controls and broaden them to gasoline, diesel and other "socially important" consumer goods

He also ordered the government to develop a personal bankruptcy law and consider freezing utilities' prices and subsidizing rent payments for poor families.

He said the situation was improving in protest-hit cities and towns after the state of emergency was declared which included a curfew and movement restrictions.

Nazarbayev, 81, had run the country for almost 30 years before resigning abruptly in 2019 and backing Tokayev as a successor. Nazarbayev retains sweeping powers as the chairman of the security council; he has not convened the council or commented on this week's violence.

Tokayev declared the emergency in Almaty and Mangistau and has said that domestic and foreign provocateurs were behind the violence.

Separately, the interior ministry said that in addition to Almaty, government buildings were attacked in the southern cities of Shymkent and Taraz overnight, with 95 police officers wounded in clashes. Police have detained more than 200 people.

Almaty mayor Bakytzhan Sagintayev said in an address to residents that the situation in the city was under control and security forces were detaining "provocateurs and extremists".

The oil-rich country's government announced late on Tuesday it was restoring some price caps on liquefied petroleum gas, after the rare protests reached Almaty following a sharp rise in the price of the fuel at the start of the year.

After the price of the fuel spiked, rallies involving thousands of people erupted on Jan 2 in the town of Zhanaozen, an oil hub and site of deadly clashes between protesters and police a decade ago.

Demonstrations spread to other parts of surrounding Mangistau province and western Kazakhstan, including provincial center Aktau and a worker camp used by sub-contractors of Kazakhstan's biggest oil producer, Tengizchevroil. The Chevron-led venture said output had not been affected.

In Almaty, police appeared to have taken control of the main square shortly after deploying flashbang grenades, according to online video streams from the area. But explosions were heard for hours on nearby streets and in other parts of the city.

Videos published online showed torched police cars in the city, as well as armored vehicles moving through one of its main thoroughfares.

On Tuesday evening, the government announced it was restoring the price cap of 50 tenge (11 cents) per liter, or less than half the market price, in Mangistau province.

Public protests are illegal in the country of 19 million unless their organisers file a notice in advance.

Tokayev, the hand-picked successor of Soviet-era Communist boss Nursultan Nazarbayev who stepped down in 2019, faces no political opposition in parliament.

The president said on Twitter on Tuesday that he would hold a government meeting the following day to discuss the protesters' demands. He urged protesters to behave responsibly.