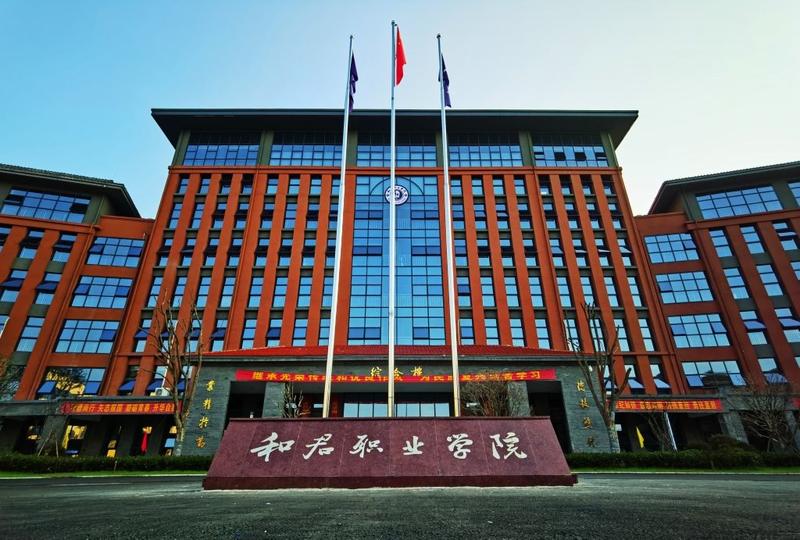 Lying deep in the mountains, Hejun College draws most of its students from rural areas in Huichang, Jiangxi province, offering young people access to a quality education.

The vocational school was established in 2019 by Wang Mingfu, a 55-year-old Huichang native who turned to education after making his mark in Beijing, where he opened Hejun Group, a consultancy company, in 2000.

In 2018, Wang launched a project to build Hejun Town, a tourist and education destination in Zikeng village, Huichang, with total investment of 3.6 billion yuan ($565 million). The college is based in the town.

College life is freer than I imagined and there are beautiful views of the town and the village that can’t be experienced in big cities.

Wang said: "I was born and brought up here, and education changed my life. I wanted to create a college to help more people access knowledge and skills. I made several visits to the area and decided to build the college in Zikeng."

He added that the village boasts a vast area of forests and bamboo plantations, along with stunning views of mountains and rivers. "It was the perfect place in my mind to build 'the most beautiful college'."

The college welcomed its first 435 students in September, with five majors on offer to date, including security management, business data analysis and study trip management.

Wang Qiulin, president of Hejun Town Development Co, who is also in charge of the college's operations, said construction of the town and college not only offers young people in rural areas a better chance of education, but has changed the outlook for villagers in Zikeng.

"The college is supported by Hejun Group, which offers consultancy services to many high-level companies, so the students have a better chance of landing company internships," he said.

"We have our own system to train students－improving their working skills and helping them establish good values. We've tailored study schedules based on the needs of companies and institutions who are cooperating with us, in order to secure better employment for our students."

Lin Meijuan, a 19-year-old majoring in security management at the college, said, "I witnessed it being built brick by brick and have formed quite a deep attachment to the college."

She added that devoting herself to her studies is much more important than seeing the outside world.

"My family members initially opposed my decision. They thought there was no need for me to continue my studies, as I did not perform well at junior middle school, but I persuaded them and now I am really relishing this chance."

Lin said that although the college is far from the urban area, she loves attending it. "I have plans for my future, but I prefer to learn more first at college and then see the outside world," she said.

Her classmate, Guo Liping, 19, also chose to study at the college because she loves the village.

"College life is freer than I imagined and there are beautiful views of the town and the village that can't be experienced in big cities. I spend my weekends working at a restaurant in Hejun to support my studies, which is fulfilling," she said.

Wang, the Hejun Town Development Co president, said running the college is similar to operating a company, as villagers are recruited to work there and teach students knowledge and skills.

"More villagers who used to work away from the county or province have returned to the town to start their own businesses－for example, by opening restaurants or homestays. We also plan to enroll another 1,500 students in 2022," he said.

However, Wang added that the college's development still faces challenges.

"As it is a relatively new school to the public, it is not so popular with applicants, leading to a problem in enrollment. The college is also located in a village where there are insufficient transportation services and shopping for the students," he said.

"But we are making efforts to cooperate with more leading academic institutions such as Nanchang University and Jiangxi University of Finance and Economics so that our students have a better chance of continuing their studies at these universities after reaching associate degree level."