Tuning into a better world 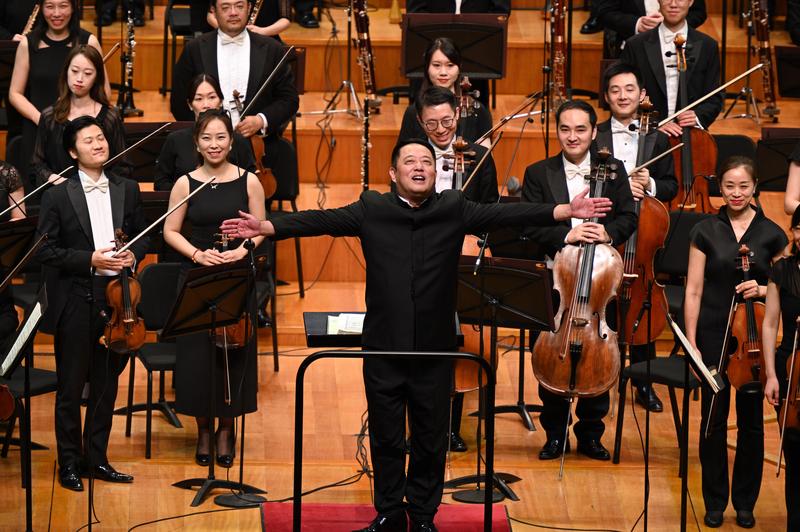 The China NCPA Orchestra performs under the baton of conductor Lyu Jia (center) in Beijing in August. (PHOTO PROVIDED TO CHINA DAILY)

With musicians around the world not being able to tour globally due to COVID-19 travel restrictions, filling the cultural exchange gap has become more challenging.

On Nov 29 and 30, more than 100 industry representatives from 70 international art institutions in more than 20 countries got together online during the Beijing Forum for Symphonic Music 2021, discussing and exploring new possibilities for its future development in the face of the global pandemic.

With a theme of "vision and innovation for a shared future", the forum, initiated by the National Center for the Performing Arts in 2019, was held via videoconferencing for the first time to further promote exchanges, mutual learning and the sharing of industry operation experience.

"Our daily lives have been changed by the pandemic," says Chinese violinist Lyu Siqing, adding that many of his concerts were canceled as a result. "For musicians, it's also very difficult to have performances, which is very depressing. I can still recall the moment when I performed in the empty concert hall of the NCPA on July 13 last year, which was my first concert in nearly six months. When I performed in the empty concert hall in front of the cameras, I felt very excited because I was able to perform again. However, it was also a special concert because I had no audience sitting in front of me."

Russian conductor Valery Gergiev, who gave an online speech at the opening ceremony of the forum, says: "I was in Beijing to attend the first Beijing Forum for Symphonic Music, where I met lots of friends and musicians from around the world. It was an unforgettable experience. I have lots of friends in China and I am especially impressed by the young musicians, who are performing worldwide."

The conductor performed at the NCPA in December 2007, when the venue was officially launched, and has returned to China many times since then.

The two-day forum was also livestreamed in 39 countries, including the United Kingdom, Germany, France and the United States.

According to Wang Ning, director of the NCPA, the forum aims at connecting the music community worldwide and sharing ideas about the development of the classical music scene, which is affected by the pandemic.

"The value of classical music is enduring in the age of the pandemic. We learn from one another about how performing arts institutions have responded to these unprecedented changes caused by the pandemic," says Wang. 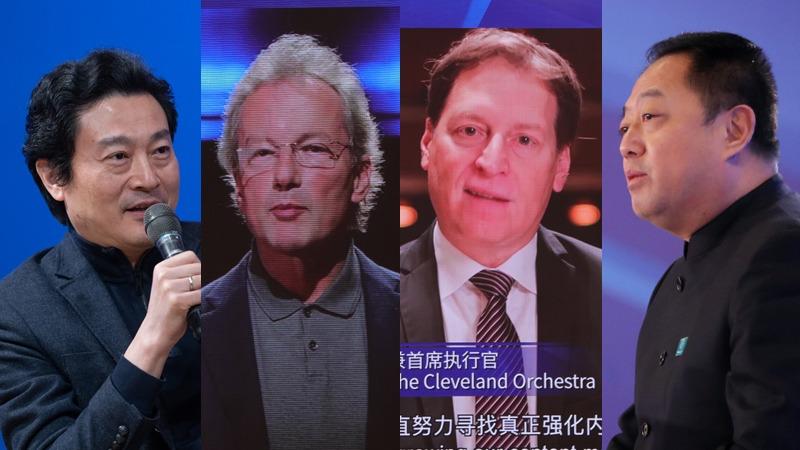 Industry representatives from more than 20 countries attend the Beijing Forum for Symphonic Music 2021 online, on Nov 29 and 30, including (from left) violinist Lyu Siqing, Austrian conductor Franz Welser-Most, Andre Gremillet, president and CEO of the Cleveland Orchestra from the United States, and conductor Lyu Jia. (PHOTO PROVIDED TO CHINA DAILY)

On March 27, German cellist Jan Vogler initiated and organized a 240-hour marathon event where original performance content from 66 groups of musicians was livestreamed, including pianists, flutists, ensembles and banjo players.

"We should do something as a musical community and unite together in sending a message of hope to the entire world," says the cellist, who also serves as the director of the Dresden Music Festival and is also the artistic director of the Moritzburg Festival.

The cellist says he considers himself as a part of the Chinese people, because his wife, violinist Mira Wang, was born and raised in Beijing before she went to study and live in the US. Their children live in New York and Dresden now.

"I've been traveling and performing in Asian countries, which allowed me to know and understand Asian culture. Though the pandemic has brought challenges to travel, we still need to communicate with the help of technology," he says. During the pandemic, the cellist founded a company, named Dreamstage, offering online music content, from classical music to rock and pop. "I hope we can give a sign of lifting some spirits and sending a message that there's creativity and artistic output for people to enjoy," he says.

According to Stefan Dohr, chairman of the Berliner Philharmoniker, who is also a French horn player, a few years before the pandemic hit, the German orchestra launched its online concert program, named Digital Concert Hall, which offers more than 650 concerts, films, interviews and playlists, in addition to regular live broadcasts.

"Symphony orchestras and art institutions have been around for hundreds of years. They have found a way through before and will find a way this time, too, though it's undoubtedly challenging," says Dohr, who has been with the Berliner Philharmoniker for 28 years.

"It's good to see what many arts organizations have already been doing in finding new ways to reach audiences."

He also mentions that despite the pandemic, it's important to train and recruit young musicians.

"For example, we will soon have an audition for a French horn player, which will have 129 applicants competing for one position," Dohr says. "Cultivating young artists in the performing arts scene, especially in classical music, is an existential issue for the future of the field. This issue is unchanged."