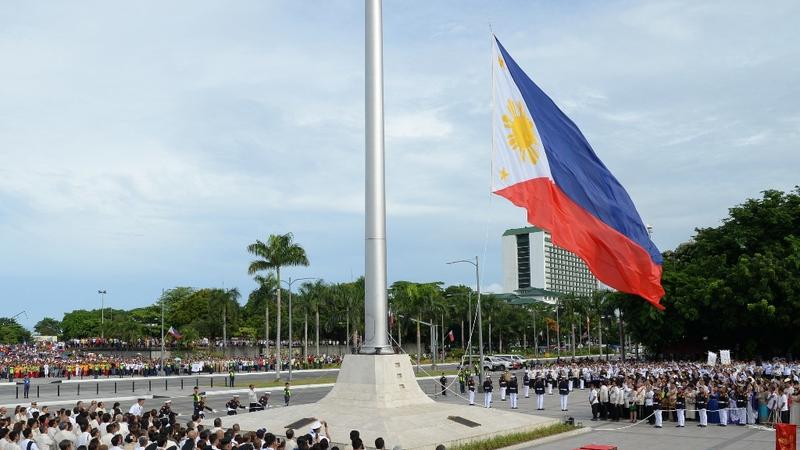 A general view of a large Philippine national flag being raised during the Independence Day celebration at the Rizal monument in Manila on June 12, 2019. (TED ALJIBE / AFP)

MANILA - The Philippines' Supreme Court declared two parts of a controversial anti-terrorism law unconstitutional on Thursday, dismaying activists and rights groups who sought the scrapping of the legislation over fears it threatened civil liberties.

While the Philippines does have legitimate security threats, including Islamist extremism, lawyers and human rights groups challenging the legislation say it could be abused to target government opponents and suppress peaceful dissent.

President Rodrigo Duterte has defended the legislation, saying law-abiding citizens have nothing to fear.

The Supreme Court missed the opportunity to defend the Filipino people's human rights and democracy .... You don't defeat terrorism by terrorizing the people and stifling their rights. The answer to non-state terrorism is not state terrorism.

Akbayan, a group of activists and legislators

The Supreme Court, which has yet to release a breakdown of ruling, said in a statement said it struck down a part of the law "for being overbroad and violative of freedom of expression."

It also declared as unconstitutional a provision that allows an anti-terrorism council appointed by the president to adopt requests by other entities, including international organizations, to designate individuals and groups as terrorists.

Akbayan, a group of activists and legislators, said the ruling was a devastating blow for the country.

"The Supreme Court missed the opportunity to defend the Filipino people's human rights and democracy," it said.

Lawmaker Edcel Lagman, who was among the petitioners, said a law that allows detention of a suspect for up to 24 days without a warrant was a "blatant violation of the constitution".

Duterte's office said it would await details of the decision before commenting, but said it remained committed to fighting security threats.

Hermogenes Esperon, the national security adviser and vice chairman of the anti-terrorism council, said the government would respect whatever the court decided.

READ MORE: UN: 'Near impunity' for drug war killings in the Philippines

Rights group Karapatan, another petitioner, said the entire law should be ditched over repressive provisions that were "only set to worsen the already dismal human rights situation."