Philippines' Duterte to run for Senate, not against daughter 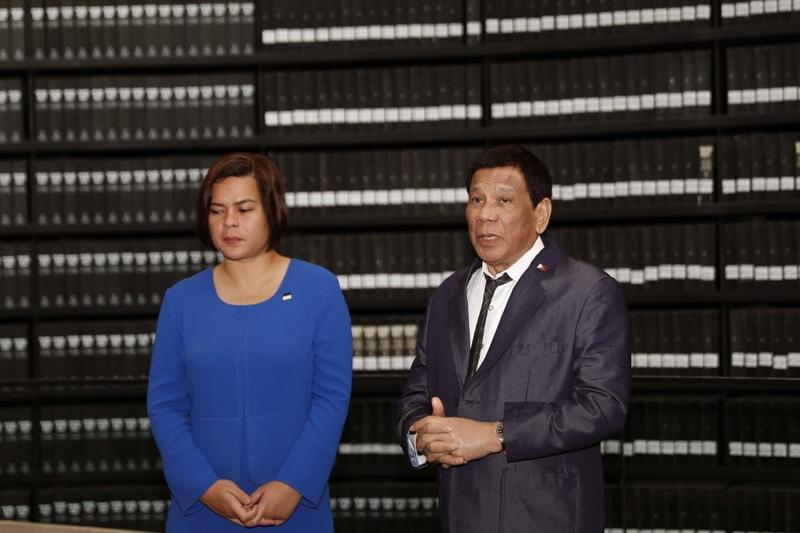 In this file photo taken on Sept 3, 2021, Philippines President Rodrigo Duterte (right) and his daughter look at pictures of Jewish Holocaust victims at the Hall of Names during his visit to the Yad Vashem Holocaust Memorial museum in Jerusalem. (GALI TIBBON / AFP)

MANILA - Philippines President Rodrigo Duterte will compete for a seat in the country's Senate in elections next year, his top aide said on Monday, ending speculation that he would run for vice president against his own daughter.

The latest twist came as Monday's deadline neared for political parties to finalize candidates, keeping voters on the edge, with last-minute changes still possible in unpredictable but significant presidential and vice-presidential races.

Rodrigo Duterte's closest aide, Christopher "Bong" Go, a senator who is running for the presidency, in a text message to Reuters confirmed a radio report that Duterte will vie for a senate seat in the 2022 polls

Duterte's closest aide, Christopher "Bong" Go, a senator who is running for the presidency, in a text message to Reuters confirmed a radio report that Duterte will vie for a senate seat in the 2022 polls.

Duterte is not eligible to run for president again.

Go's remarks run counter to those on Saturday by Duterte's communications chief, who said the president would run for vice-president, and challenge his daughter, Sara Duterte-Carpio, a mayor who is vying for the same position.

Presidential spokesperson, Harry Roque, ruled that out earlier on Monday.

"What I can say is – the father and daughter, President Rodrigo Roa Duterte and Mayor Inday Sara, love each other," Roque said after filing his candidacy for senator, referring to Duterte-Carpio by her nickname.

In the Philippines, the president and vice-president are elected in separate contests.

Duterte's 43-year-old daughter had been expected to run to succeed him as president due to her popularity and clear lead in all opinion polls this year on preferred candidates.

She however signed on to run for the vice-president's post, but can still change her mind.

It was not yet clear who Duterte-Carpio will run with, but presidential aspirant and son of late strongman, Ferdinand Marcos Jr. has said he wants her to be his running mate.

Candidates have until 09:00 GMT on Monday to withdraw or switch positions by way of substitution.