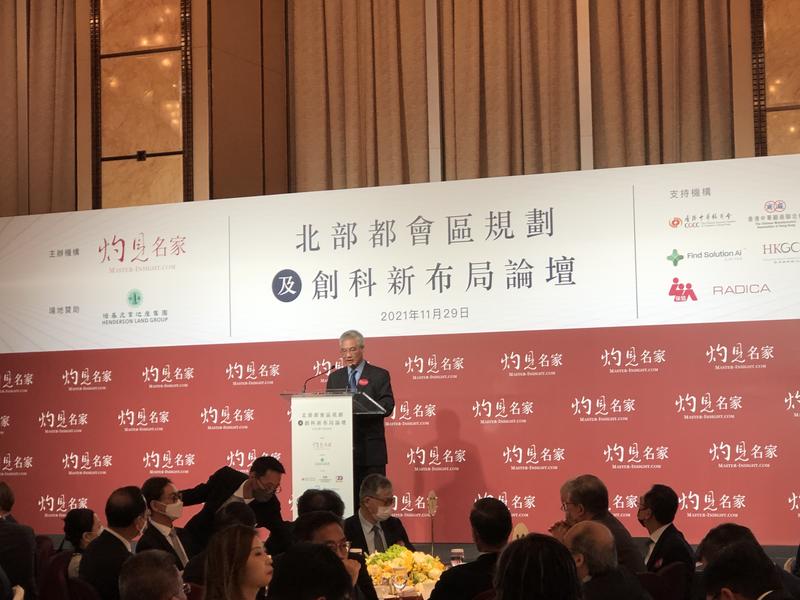 The Northern Metropolis Development Strategy, unveiled in Hong Kong’s 2021 Policy Address, will make the city an international innovation-and and-technology hub, as the introduction and flow of talent and introduction will be encouraged and barrier-free.

Experts made the prediction on Monday at a forum on Northern Metropolis planning and the new I&T blueprint. Master Insight Media hosted the event.

The national 14th Five-Year Plan (2021-25) positions the Hong Kong Special Administrative Region as the an international I&T hub, said Chung Wai-keung, undersecretary for Innovation and Technology of the HKSAR government, in his opening speech. The central government has spared no effort to forge connections between Hong Kong and Shenzhen, which shows the central government’s staunch backing of Hong Kong’s bid to become a rising star in innovation and technology on the world’s stage, he added.

The Hong Kong and Shenzhen governments had started discussions on technology research-and-development resource and talent pooling in September, even before the Policy Address, in which the SAR government announced the construction of the San Tin Technopole in its Northern Metropolis Development Strategy, Chung said.

Chung said he welcomes the plan to set up an InnoLife Healthtech Hub in the proposed metropolis, where applications in fields, such as disease prevention, diagnosis, medicine and surgical micro-robots, will be in full swing. “Hong Kong has a wealth of seasoned clinical professionals. This Hong Kong advantage plus the perceived potentials in the Greater Bay Area are opportunities for the SAR,” Chung said.

Opportunities are plentiful, and the key to unlocking them is talent flow and experience exchange, said Rocky Cheng Chung-ngam, chief information officer at Bank of China (Hong Kong).

Hong Kong indeed has competitive edges on many fronts, he said. “But sometimes we’re preoccupied with these advantages and oblivious of our deficiencies. For example, Hong Kong is short of AI (artificial intelligence) and data talents compared to Shenzhen, where such technologies and applications are developed at lightning speed,” Cheng said.

Technology R&D is just the first step. Morphing the technology into a real product can make a real difference to the society, Cheng said. Nevertheless, the technology commercialization among Hong Kong startups is underwhelming, he said.

It’s not easy to do I&T from the ground up in Hong Kong, said Viola Lam, chief executive and founder of Find Solution AI. “Hiring a software developer with at least three years of experience is expensive. In the end, you could find your company failing to make ends meet for half a year into the business. Commercializing a technology takes a lot more, HK$5 million ($640,000) to HK$6 million a year.”

Universities and technology institutions should be proactively involved in facilitating knowledge transfer, and the Northern Metropolis will help with channeling and pooling technology R&D outcomes as well as professionals, and expediting technology commercialization, Cheng said.

Cross-border collaboration among universities has been making essential headway, the speakers said. Beijing Normal University-Hong Kong Baptist University United International College was founded in Zhuhai; Hong Kong University of Science and Technology Nansha Youth Innovation Entrepreneurship Base was set up in Guangzhou; and The Chinese University of Hong Kong launched its campus in Shenzhen. “Behind every successful techno-cluster must be a robust support and engagement from universities,” said Wong Kam-fai, director of Centre for Innovation and Technology at CUHK.

The technopole, projected to take up a total gross floor area of 1,100 hectares, 16.5 times the size of Hong Kong Science Park, is dubbed as “Hong Kong’s Silicon Valley”. It’s hoped the cross-border frenetic activities in the “valley” will allow Hong Kong to locate its second economic engine — I&T industry.

“The foundation of a good techno-valley is an instrumental environment,” said Ling Kar-kan, strategic planning adviser for Hong Kong-Shenzhen Cooperation in the HKSAR government. It will take concerted support from the government, universities and all parties involved to nurture an agreeable and wholesome I&T ecosystem, he said.

An entrepreneurial spirit inspires a mindset of “think big, do big and try big”, which is a must-have in a techno center because it makes the impossible possible, Cheng said.