US slammed for undemocratic activities 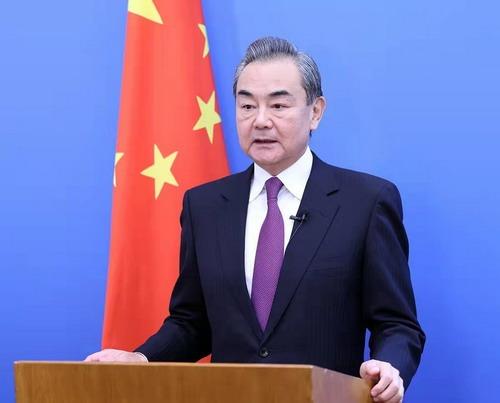 State Councilor and Foreign Minister Wang Yi said democracy should not be privatized, labeled or politicized, expressing strong opposition to Washington engaging in undemocratic activities under the banner of "democracy".

Wang's remarks came as the United States will hold a so-called "Summit for Democracy" in December, which will bring together leaders from a group of countries.

If the US labels countries as democratic or undemocratic in line with its preferences, this move itself is undemocratic, Wang Yi said, adding that it creates divisions and seeks supremacy for the US

Noting that democracy is the right of all peoples, rather than an exclusive privilege of the few, Wang said whether a country is democratic or not should be left to its own people to decide, rather than arbitrarily judged by a certain foreign country.

The standard of democracy should be based on whether it meets people's needs, and whether it enables people to have enough sense of participation, satisfaction and gain, he said.

If the US labels countries as democratic or undemocratic in line with its preferences, this move itself is undemocratic, Wang said, adding that it creates divisions and seeks supremacy for the US.

"If a country can only measure the quality of its own democracy based on the sole yardstick of the US, it is actually a betrayal of the democratic spirit, let alone being true democracy," he added.

Wang criticized Washington's use of democracy as a political tool, adding that some US practices have aroused the suspicion and dissatisfaction of many countries.

Calling the move meddling in internal affairs and pointing out that infringing on the sovereignty of other countries in the name of democracy to serve a political agenda is despicable, Wang said such practices must be rejected.

ALSO READ: Summit of democracy looks back in anxiety

Wang emphasized that the world needs unity, not division, and it needs cooperation rather than confrontation. He called for countries, and particularly major countries, to play a leading role in this regard, rather than setting an opposite example.

Axel Jesson Ayenoue, deputy general secretary of the Gabonese Democratic Party, echoed China's viewpoints on democracy, which he said had a global vision.

He said people of all countries were entitled to choose their own development paths and institutional models that suited their own national conditions, which was the key for them to advance democracy.

"People can enjoy tangible benefits brought about by the development and progress of their own country, which is of paramount importance for democracy," he said.

The so-called "Summit for Democracy" is seen by many countries as an attempt by the US to make democracy a tool serving its own interests, which damages democratic values and creates divisions.

Russian presidential spokesman Dmitry Peskov said on Wednesday that the US preferred to divide countries into those that — in its opinion — were good, and those that were bad, adding that Washington was trying to privatize the term "democracy".