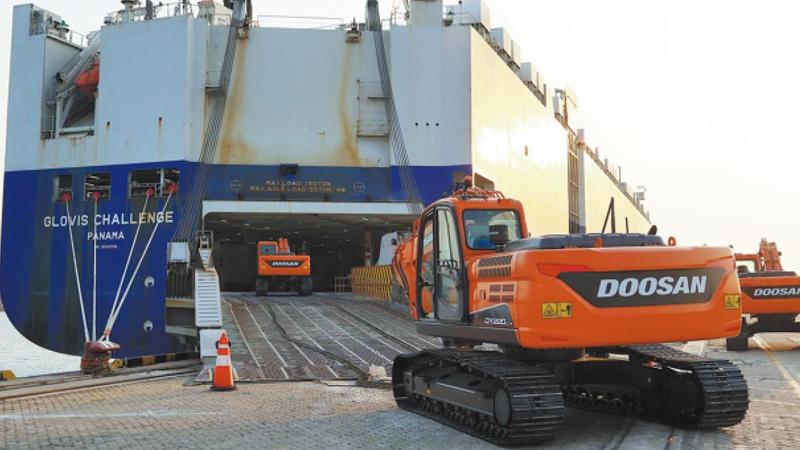 In this undated photo, construction vehicles are driven aboard the Glovis Challenge at Yantai Port, Shandong province, for export to countries in East Africa. (TANG KE / FOR CHINA DAILY)

BEIJING - China and Africa have maintained robust economic and trade cooperation, despite COVID-19, as their bilateral trade has set a record high in the January-September period.

Trade between China and Africa rose 38.2 percent year on year to 185.2 billion US dollars in the January-September period, reaching the highest level in history for the same period, Chinese Vice Commerce Minister Qian Keming said Wednesday.

China's direct investment in Africa hit 2.59 billion US dollars in the first nine months, up 9.9 percent, year on year. The growth rate is 3 percentage points higher than China's overall outbound investment, Qian said, adding that the growth rate outperformed the pre-pandemic level in the same period of 2019.

Against the backdrop of COVID-19, the 55 FOCAC members will gather again, which shows the strong willingness of China and Africa to deepen cooperation, Chinese Vice Commerce Minister Qian Keming said

The Eighth Ministerial Conference of the Forum on China-Africa Cooperation takes place in Senegal at the end of November.

Against the backdrop of COVID-19, the 55 FOCAC members will gather again, which shows the strong willingness of China and Africa to deepen cooperation, Qian said. Qian believes the conference will boost the China-Africa comprehensive strategic and cooperative partnership and chart the course for sustainable and high-quality development of China-Africa cooperation. He also said it would play a positive role in building a China-Africa community with a shared future in the new era.

China has maintained its position as Africa's largest trade partner for 12 years straight. The bilateral trade defied pandemic pressure to hit 187 billion US dollars in 2020.

Ever since the establishment of the Forum on China-Africa Cooperation in 2000, trade between China and Africa and China's direct investment in Africa have increased 20 and 100 times, respectively, said Xu Bu, president of the China Institute of International Studies, at a forum in October.

Regarding sustainable development, Qian said China is ready to strengthen policy coordination with Africa. China would boost green, low-carbon, and clean energy cooperation and conduct technology exchanges to support Africa in enhancing its capacity to adapt to climate change and achieve sustainable development.