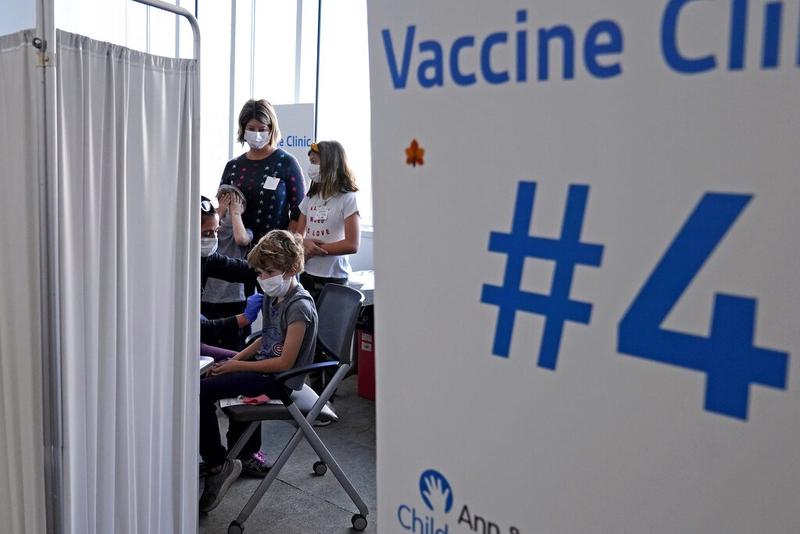 US multinational pharmaceutical corporation Pfizer has come under pressure over alleged data fraud suspicion in its COVID-19 clinical trials, according to British medical journal The BMJ.

Staff who conducted quality control checks were overwhelmed by the volume of problems they were finding, the article reads.

Before she blew the whistle to the journal, the former regional director, with more than 15 years of experience in clinical research coordination and management, was fired for repeatedly reporting massive clinical trial violations of Pfizer, including having emailed a complaint to the US Food and Drug Administration.

While verifying her statements and the information provided, The BMJ received more evidence confirming that the vaccine trials did not meet the standards declared by Pfizer, including improper storage of jabs, violations of the norms of blind testing, frequent data errors and slow response to side effects complaints, the article reads.

A child wears a pin she received after receiving her first dose of the Pfizer COVID-19 vaccine at the Beaumont Health offices in Southfield, Michigan on Nov 5, 2021. (JEFF KOWALSKY / AFP)

The development came as Pfizer said its experimental antiviral pill to treat COVID-19 cut by 89 percent the chance of hospitalization or death for adults at risk of severe disease.

Pfizer's pill, with the brand name Paxlovid, could secure US regulatory approval by the end of the year

The trial's results suggest that Pfizer's drug surpasses Merck & Co Inc's pill, molnupiravir, which was shown last month to halve the chance of dying or being hospitalized for COVID-19 patients at high risk of serious illness.

Pfizer's pill, with the brand name Paxlovid, could secure US regulatory approval by the end of the year. Pfizer said it plans to submit interim trial results to the Food and Drug Administration before the Nov 25 US Thanksgiving holiday. The trial was stopped early due to its high success rate.

President Joe Biden said the US government has secured millions of doses of Pfizer's drug.

"If authorized by the FDA we may soon have pills that treat the virus in those who become infected," Biden said. "The therapy would be another tool in our toolbox to protect people from the worst outcomes of COVID."

Shares in Pfizer, which also makes one of the most widely used COVID-19 vaccines, rose 11 percent to close at $48.61. Merck's fell 10 percent to close at $81.61. Shares of vaccine makers took a hit, with Moderna Inc, Pfizer's German partner BioNTech SE and Novavax all down 11-21 percent.

Pfizer's pill is given in combination with an older antiviral called ritonavir. The treatment consists of three pills given twice daily. It has been in development for nearly two years.

The Pfizer and Merck pills are eagerly anticipated, with only limited options currently available for treating people sick with COVID-19. Full trial data is not yet available from either company.

Pfizer is in active discussions with 90 countries over supply contracts for its pill, Chief Executive Officer Albert Bourla said in an interview.

"Our goal is that everyone in the world would be able to have it as quickly as possible," Bourla said.

Bourla added that for high-income countries Pfizer expects to price its treatment close to where Merck has priced its drug. Merck's US contract price is around $700 for a five-day course of therapy. For low-income countries, Bourla said Pfizer is considering several options, with the goal of "no barrier for them as well to have access."

Merck's pill was approved by British regulators in a world first on Thursday.

Even with the potential offered by the Pfizer and Merck pills, preventing COVID-19 infections through broad use of vaccines remains the best way to control a pandemic that has killed more than 5 million people worldwide, including more than 750,000 in the United States, infectious disease experts said.

"Vaccines are going to be the most effective and reliable tool that we have in this pandemic," said Dr Grace Lee, professor of pediatrics at Stanford University School of Medicine. "These oral medications are going to augment our ability to really reduce the risk of severe disease, hospitalization and death, which is huge, but it won't prevent infection."

Apple Inc will drop its mask requirement for customers at many of its US retail stores starting Friday on declining COVID-19 cases and increased vaccinations.

The change will take place beginning at more than 100 of the company’s about 270 stores across the US before gradually expanding to additional stores in the coming days. The mandate will be removed at some stores in states including California, Florida, Arizona, New York, Louisiana, New Jersey and Connecticut.

Austria will no longer allow people with only a negative test to access restaurants, hotels and most services in an attempt to curb exponential growth in virus cases.

Entry will be limited to vaccinated and recovered people from Monday, Chancellor Alexander Schallenberg told reporters Friday. The regulation will also apply to services in the upcoming ski season which is key to the nation’s tourism industry.

Austria is looking to curb growth in new virus cases that reached more than 9,000 on Friday, the most in a year.

British Prime Minister Boris Johnson shakes a bottle of the Pfizer vaccine as it is diluted before being administered as he visits a COVID-19 vaccination center at Little Venice Sports Centre, in London, Oct. 22, 2021. (MATT DUNHAM / AP / POOL)

Britain's health ministry on Saturday said it would open up bookings for booster shots a month before people were eligible to receive the shots to help speed up the rollout ahead of the challenging winter months.

Prime Minister Boris Johnson is relying on booster doses as a major plank of his plan to avoid lockdown this winter through COVID-19 vaccines rather than social distancing rules or mask mandates, but has been criticized for a slow start to the program.

Around 3 in 5 eligible over-50s have had booster shots in England, with more than 9 million people getting booster doses in Britain overall so far.

Over-50s and vulnerable people will still become eligible for their booster shots 6 months after their second dose. But from Monday, they can book the appointment after five months.

Currently, people can only book the appointment six months after their second dose.

Germany is pushing for COVID-19 booster shots for all adults, the latest effort to control a record surge in infections that’s threatening to overwhelm hospitals in some hot spots this winter.

“We need more speed with these boosters,” Health Minister Jens Spahn said Friday at a news conference. Bolstering protection after six months of being fully inoculated “should be the rule, not the exception,” he said after two days of talks with regional counterparts.

The number of cases in Germany rose by a record for a second straight day, as a fourth wave of the disease continues to spread and threatens to overwhelm hospitals.

Greece recorded 6,909 new cases Friday, the highest daily increase since the beginning of the pandemic. The rise is the fifth time since Sunday that a record has been set.

Greek authorities announced Tuesday new COVID-19 measures targeting the unvaccinated given the jump in daily infections. From Nov 6, those who haven’t been vaccinated but want to attend their place of work must undergo two rapid tests a week instead of one — paid for themselves.

To enter most stores, banks and restaurants, they’ll also need to present a negative rapid or PCR test.

US regulators cleared a new over-the-counter COVID-19 test Friday that could add millions of tests per month to the market for rapid COVID-19 diagnostics that have sometimes been in short supply, according to federal health authorities.

The Food and Drug Administration granted emergency use authorization to the at-home test from iHealth Labs Inc, a closely held Sunnyvale, California company. The company can produce a million tests a day, capacity that will grow to 5 million daily and eventually up to 200 million tests per month, according to a spokesman for the US Health and Human Services department.

The aide and some of Biden’s other traveling staff remained in Scotland after the president attended the United Nations climate summit in Glasgow because of concern about transmission, according to a White House official.

The initial, positive result was a rapid antigen test. But a follow-up polymerase chain reaction test, which detects viral DNA in a patient’s sample, was negative, Psaki said.

White House staff members who had contact with the aide have so far tested negative, the official said. Biden himself was tested for the virus on Tuesday and was negative.