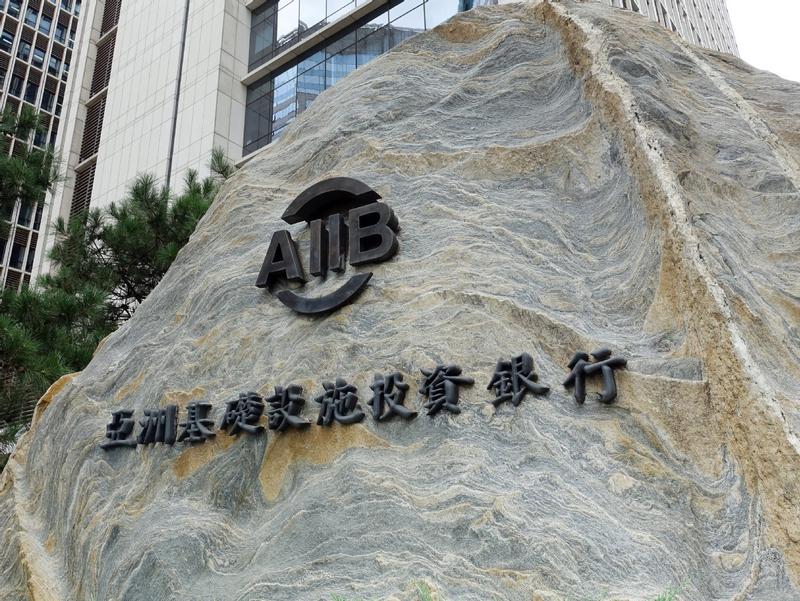 The logo of Asian Infrastructure Investment Bank is seen at its headquarters in Beijing, Aug 6, 2018. (PHOTO /IC)

Various countries should further increase investments in new and renewable energy, which is one of the most effective measures to tackle energy shortages, said a top executive of the Asian Infrastructure Investment Bank on Wednesday.

"Recently, not only China but also many European countries were hit by power shortages. I don't see this as a crisis but a temporary tight relation between supply and demand," said Jin Liqun, president of the AIIB, a Beijing-based multilateral development bank.

"We can't draw a conclusion from the temporary shortages that we should slow down the efforts to realize China's goals to have CO2 emissions peak by 2030 and achieve carbon neutrality by 2060 or even go backwards. Instead, the recent problem tell us it is indeed challenging to walk toward these goals and remind us to better grasp the bigger picture and further step up investment in new and renewable energy," said Jin in an interview on the sidelines of the bank's annual meeting.

The bank announced on Tuesday it will align its operations with the goals of the Paris Agreement by July 1, 2023. It estimates its cumulative climate finance approvals to reach $50 billion by 2030, representing a fourfold increase in annual climate finance commitments since the AIIB started publicly reporting the number in 2019.

The latest announcement marks an important step toward achieving the bank's goal of targeting at least a 50 percent share of climate finance in actual financing approvals by 2025, up from 41 percent of its infrastructure portfolio in 2020.

During the process of promoting infrastructure construction and the development of renewable energy, the AIIB strictly screened each project and conducted feasibility studies of the projects. As renewable energy technologies have continuously improved, this kind of project will not bring too much risk to its investments, Jin said.

"If we don't hurry up with promoting the development of renewable energy, we'll face higher risks in the future ... We should try to avoid stranded assets, which could be created by our current investments in conventional energy projects," he said.

He pointed out that it is also necessary to change the opinion that promoting the development of low-carbon economy will affect economic growth, and that policymakers have to choose between them.

"What's more important for many emerging market economies is the quality of economic growth, rather than the quantity. At the initial stage of economic development, the growth rate was 7 percent, or even 9 percent. However, a large part of the growth caused environmental damage, so we have to spend a huge amount of resources later to curb pollution and improve the environment.

"On the contrary, if the growth is slower but solid, doing no harm to the environment, it would lead to real and high-quality development," he said.

"The Chinese economy should head toward solid, safe and steady growth, rather than seeing drastic changes. I don't think a moderate economic slowdown in China is a problem. On the contrary, it means the country is making progress."

Also on Wednesday, the AIIB announced it had approved the application of Nigeria to join the bank, thus increasing the number of its approved members worldwide to 104. In Africa, the bank now has 11 members and nine prospective members.