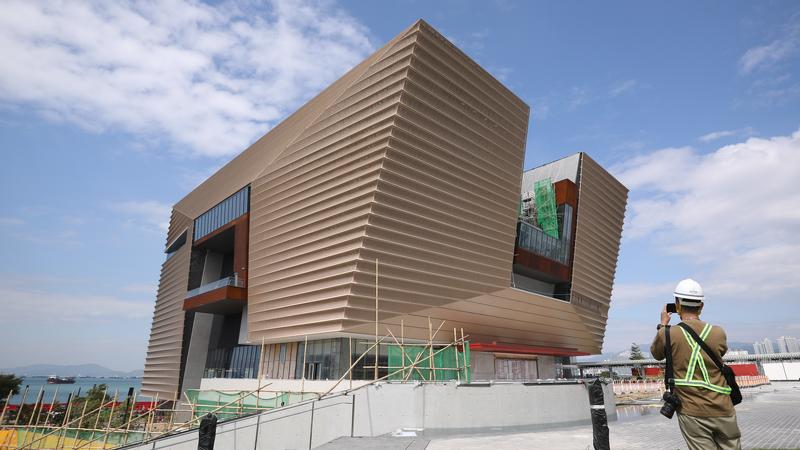 The Hong Kong Palace Museum – being built in West Kowloon Cultural District – is due to open in July 2022. (CALVIN NG / CHINA DAILY)

HONG KONG - Situated at the heart of Beijing is the Palace Museum, also known as the Forbidden City, home to Chinese emperors of Ming (1368-1644) and Qing (1644-1911) dynasties and a large collection of exquisite cultural treasures.

Thousands of kilometers away, a modern variant of the Palace Museum is preparing for its debut in Hong Kong in southern China.

Scheduled to be opened to the public in mid-2022, the Hong Kong Palace Museum, located at the harbor front of the West Kowloon Cultural District, is the first ever collaboration project of the Palace Museum in Beijing beyond the Chinese mainland.

By then, more than 900 pieces from the collection of the Palace Museum in Beijing, including 166 first-class cultural relics of the country, will be displayed in Hong Kong where Eastern culture meets Western culture, said Louis Ng Chi-wa, director of the Hong Kong Palace Museum.

By mid-2022, more than 900 pieces from the collection of the Palace Museum in Beijing, including 166 first-class cultural relics of the country, will be displayed in Hong Kong where Eastern culture meets Western culture, said Louis Ng Chi-wa, director of the Hong Kong Palace Museum

Cross between history and modernity

Traditional-style bricks and tiles, which are elements typically seen in ancient Chinese architectures, are not used in the Hong Kong Palace Museum. However, through the mix of modern architectural techniques and traditional design concepts, you can still feel its classical oriental charms.

The seven-story museum building is wide at the top and narrow at the bottom. The shape bears resemblance to many classic Chinese utensils, the most representative of which would be "fangding," a rectangular cauldron standing on four legs and crowned with two facing handles, one of the most important shapes used in ancient Chinese ritual bronzes.

"The design is to highlight a sense of history," Wang Yong, person-in-charge of the Hong Kong Palace Museum construction project from the China State Construction Engineering (Hong Kong) Limited, told Xinhua in an exclusive interview.

Looking closer, people will discover various details echoing with those of the Palace Museum in Beijing. To imitate ancient city walls, large parts of the Hong Kong Palace Museum's walls are covered with fair-faced concrete, a modern finishing design exposing the concrete surface without any covering. Some parts are of a smooth surface, while some others boast decorative lines.

"We used hammers to knock out rough edges on the concrete to create the decorative lines," Wang explained. "It requires an extremely high standard of the concrete mix design and workmanship."

Golden curved aluminum panels are used on the exterior walls to create an effect of glazed tiles. In front of the main entrance, transparent glass plates are lined up on the ground, recreating the flowing waters of the Golden Water River as they glisten under the sun. A few steps ahead, red gate doors decorated with golden doornails will welcome visitors into this fascinating world of historical gems.

Stepping inside, the distinctive "Central Axis" concept in Beijing is used in the atrium. The Central Axis, formed during the Yuan Dynasty (1271-1368) and developed in Ming and Qing dynasties, is a line that runs through the center of Beijing from south to north, dividing the old city into two and arranging buildings on both sides symmetrically. The Palace Museum in Beijing is one of the best-known attractions along the axis. 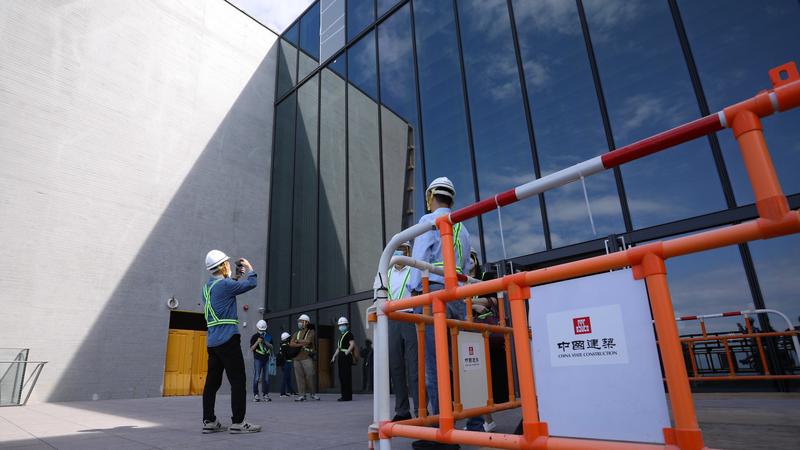 The Hong Kong Palace Museum – being built in West Kowloon Cultural District – is due to open in July 2022. (CALVIN NG / CHINA DAILY)

The aid of advanced technologies was indispensable during the construction of this architectural masterpiece. "We used 4,022 pieces of aluminum panels in our construction," Wang said. "If we produce them in the traditional way, not only will it take a very long time, there is also a high risk of having installation errors."

The Building Information Modeling technology is introduced here to assist in generating processing drawings for each component and guide production and installation throughout the process, which greatly improves production efficiency and accuracy

The Building Information Modeling technology is introduced here to assist in generating processing drawings for each component and guide production and installation throughout the process, which greatly improves production efficiency and accuracy.

Keeping the exhibits in their best conditions is the top priority when it comes to a museum storing national treasures. Constant temperature and humidity, resistance to disasters and a sound security system are all key to maintaining an ideal storage environment.

To that end, the engineering team of the company adjusted more than 8,000 valves and 1,224 air nozzles to achieve the ideal temperature and humidity.

In case of a fire, the Novec 1230 fire protection system will release noble gases within 30 seconds, filling up storage rooms of a few hundred square meters and extinguishing the fire without using any water. Shock-absorbing slingshots were installed on each ceiling screw for noise reduction, enabling visitors to have a good experience.

Officially beginning on April 24, 2019, the construction of the Hong Kong Palace Museum building, which is expected to be fully completed by the end of this year, has received wide recognition.

Not only has it won 17 awards in areas including engineering, safety and environmental protection, industry experts from construction and engineering fields have also spoken highly of the project during their recent visit to the construction site.

To Wang, the construction project of the Hong Kong Palace Museum is a greatly important mission.

"The Palace Museum is a representation of the Chinese civilization," Wang said. "We hope that through constructing this museum in Hong Kong, we can better bring Chinese culture to the rest of the world."