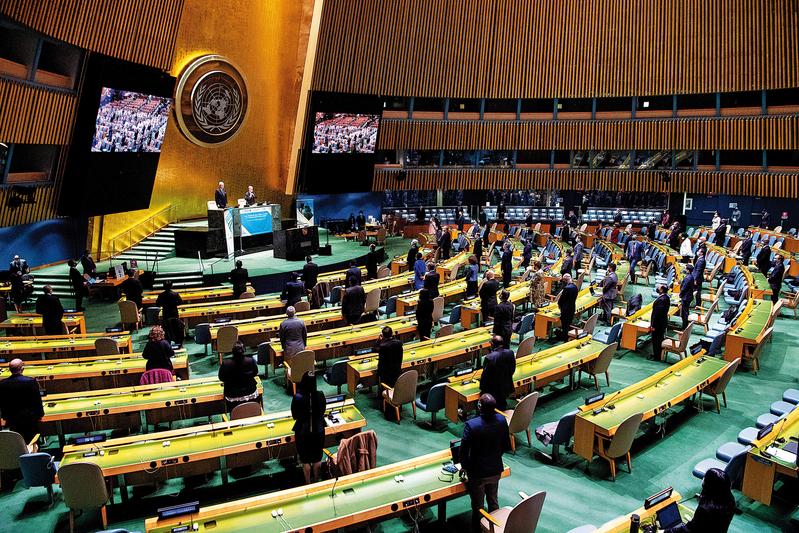 A convention on the global fight against COVID-19 is held at the UN headquarters in December. (PHOTO / XINHUA)

In the summer of 2018, Lu Yanjun had the chance to watch Chinese-language translators and interpreters working at the United Nations headquarters in New York.

During a two-month internship with the global organization's Chinese Translation Service, she saw how Chinese versions of UN documents and reports she read in her class each day were created.

I went to buy pizza and beer to celebrate the great breakthrough in China’s diplomacy, and felt honored that I had made a small contribution to it

Hua Junxiong, retired Chinese-language translator at the UN, speaking about the adoption in 1971 of Resolution 2758 at the organization, which restored all rights to the People’s Republic of China

Lu also observed Chinese interpreters operating from soundproof booths, conveying comments made by Chinese delegates to representatives from other countries.

Chinese is one of the UN's six official languages, the others being Arabic, English, French, Russian and Spanish. Correct interpretation and translation in spoken and written form enable clear and concise communication on issues of global importance.

Lu, who at the time was a student majoring in translation and interpretation at Beijing Foreign Studies University, said, "It was a valuable experience to work with a group of prestigious language specialists and see for myself how the UN operates and understand the role it plays in international relations."

"I feel very proud of the efforts my country has made in making Chinese an official UN language. This demonstrates China's status in global affairs, and I believe that UN documents need to be translated into Chinese so that more people know what the UN is doing."

Lu experienced a passionate and positive atmosphere at the UN headquarters, but before the People's Republic of China's legal rights were restored at the organization in 1971, little attention was paid to the work of Chinese-language professionals.

Chinese was established as a UN official language in 1946, when China had no voice at the international body. Representatives of the Taiwan authorities often took pride in showing off their English, so the UN's Chinese interpreters usually had almost nothing to do.

In those days, the Chinese translation service only selected short and relevant documents to translate into Chinese. As longer documents often could not be translated and proofread in time, Chinese staff members experienced low morale, the UN said on its website. 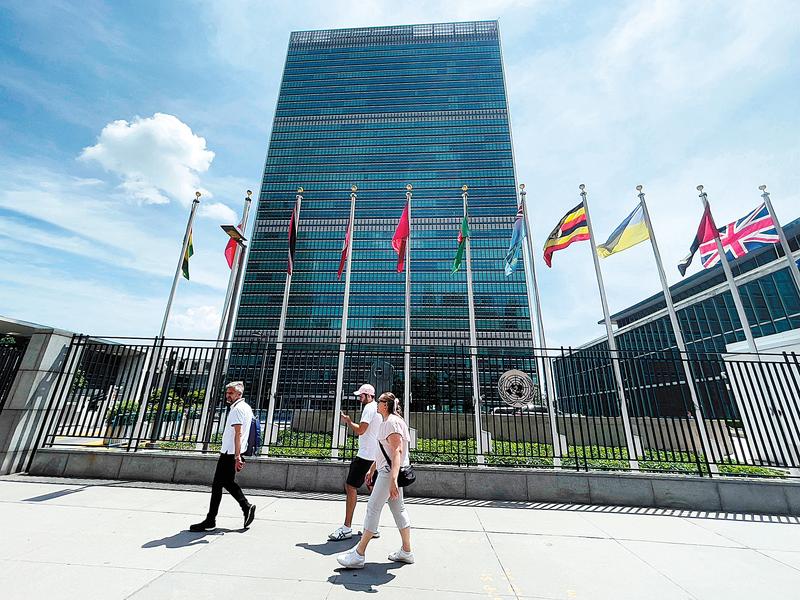 In 1970, overseas Chinese students across the United States launched the "defend Diaoyu Islands movement" in response to Washington "returning" the administrative rights to these islands in the East China Sea to Japan. The movement triggered massive demonstrations and widespread debate on sovereignty issues.

In September 1971, when the UN General Assembly was due to discuss China's representation, Chinese students staged demonstrations near the organization's headquarters.

They waved Chinese national flags and giant images of late chairman Mao Zedong, chanting slogans such as "Down with Chiang Kai-shek" and "Restore the legitimate seat of the People's Republic of China in the UN."

One of the students was Hua Junxiong from Taiwan, who was studying at the University of Pittsburgh and who joined the UN in 1973 to work as a translator.

Hua recalled his excitement on hearing the UN had adopted Resolution 2758, restoring all rights to the People's Republic of China at the organization.

"I went to buy pizza and beer to celebrate the great breakthrough in China's diplomacy, and felt honored that I had made a small contribution to it," he said.

After repeated appeals, in 1973, the UN General Assembly included Chinese as a working language, and the following year, the Security Council followed suit. After this, more UN offices and staff members worked with the Chinese language.

Hua, who retired from the Chinese translation service in 2001, initially translated documents on issues such as human rights. He was later responsible for translating documents and reports of UN Security Council meetings.

He said that in the 1970s, there was a shortage of language professionals in China. To meet the demand for such workers at the UN, many like himself who took part in the Diaoyu Islands movement were recruited by the international organization.

Chinese delegates to the UN attend an event last month to celebrate the 50th anniversary of the country's return to the organization. (LIAO PAN / CHINA NEWS SERVICE)

In the 1970s, many interpreters and translators recruited to work at the UN were from Taiwan and Hong Kong, and were not familiar with the words and phrases commonly used on the Chinese mainland.

Li Changshuan, vice-dean of the Graduate School of Translation and Interpretation at Beijing Foreign Studies University, said the UN initiated discussions with the Chinese government on training language students from the mainland to work at the organization.

After nine years of discussions with the Foreign Ministry, the UN established a training program at the university for interpreters and translators in 1979, Li said.

"There must be enough interpreters and translators to maintain the status of the Chinese language," he said, adding that promptly translating other languages into Chinese involves language equality.

From 1979 to 1993, the program supplied more than 200 language professionals to the UN, including Cui Tiankai, former Chinese ambassador to the United States, and Liu Jieyi, head of the State Council Taiwan Affairs Office.

"The program played an irreplaceable role in fostering language professionals to meet the urgent demand at the UN, and also cultivated a wealth of reserve talent for China's diplomacy work," Li said.

After the program ended, in 2001, the UN started to hold examinations for language positions around the world. 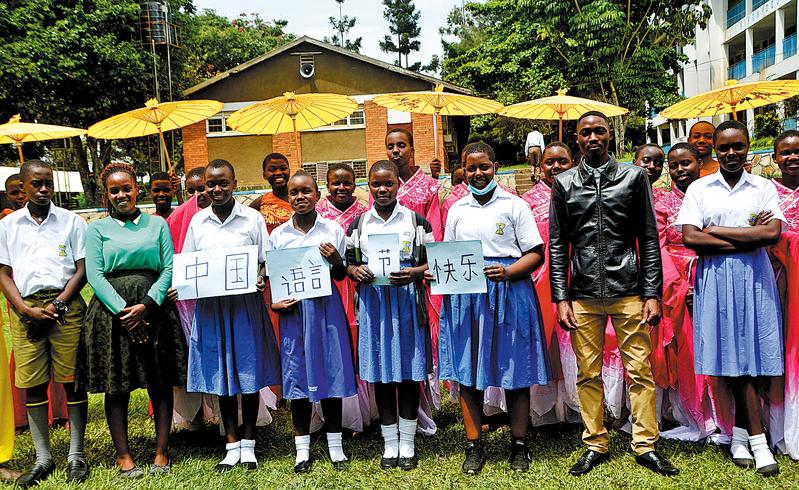 Since the 1990s, the importance of the Chinese language at the UN has increased significantly, in tandem with China's enhanced national strength and influence. In 1998, the UN's Chinese-language website was launched.

Chinese-language staff members at the UN have witnessed a number of changes.

Hua, the translator, said China's understanding of the importance of the UN has gradually evolved with the nation's growing engagement in and familiarity with international affairs.

He said China has realized that the UN is a global platform for the nation to make itself heard, but in the early days, Chinese officials were restricted in taking charge of important affairs.

For example, the first Chinese under-secretary-general for political affairs at the UN was responsible for decolonization issues, as other posts were all occupied. However, as many colonized countries gained independence in the 1970s, there was little work to do, Hua said.

Currently, four of the 15 UN specialized agencies are headed by Chinese nationals.

Translators had to work on an increasing number of documents covering a range of topics. "My workload doubled from translating three pages a day to six pages," Hua said.

He traveled to many countries for work during his 28 years at the UN, where he said he felt that Chinese delegates were highly respected. "China's position in the UN is irreplaceable," Hua added.

His view is echoed by a veteran interpreter who asked to be named only as Xiao Hua.

She said that in the 1980s, statements by China were mainly confined to stating policies and China's participation at UN meetings was limited. Now, they attend almost every meeting on various issues, and Chinese experts are sent to technical meetings.

Xiao Hua, who took the training program at Beijing Foreign Studies University in 1983, worked in the interpretation section of the UN from 1984 to 2018.

She said China's active participation at the organization resulted in a heavy workload for interpreters, adding that the nation's growing influence at the UN has highlighted the need for accuracy to ensure nothing is lost in translation.

China's influence at the UN has increased in line with its role as the largest contributor of troops to peacekeeping operations among the permanent members of the Security Council. The nation is also the second-largest contributor to the overall UN budget.

Xiao Hua and her colleagues attended numerous meetings to discuss these two issues.

"With its increased engagement, China has a bigger stake in UN finance and peacekeeping operations. It is only natural for us to care about how the budget is spent, how peacekeeping missions are accomplished, and how the safety of our peacekeepers is guaranteed," she said.

China never misses a chance to speak on human rights issues, Xiao Hua said. In addition to the rights of women, young people and those with disabilities, the nation also addresses less-known issues, such as protecting the rights of albinos, she added.

As China puts forward more concepts and initiatives for global development, she said it is important for UN interpreters to spread the nation's voice to those who speak other languages.