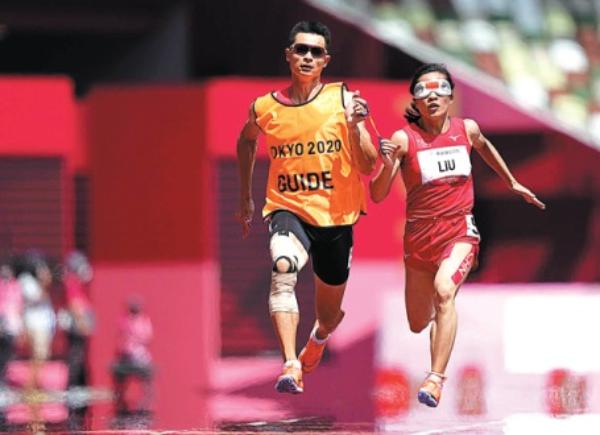 Liu Cuiqing and her guide, Xu Donglin, compete at the Tokyo 2020 Paralympics. The pair teamed up again at the 11th National Games for Persons with Disabilities, sprinting to two golds. (PHOTO / XINHUA)

XI'AN－Liu Cuiqing, a visually impaired Chinese Paralympic champion, pocketed her second medal at the 11th National Games for Persons with Disabilities on Sunday.

Helped by guide Xu Donglin, the 29-year-old secured her first gold medal of the event on Saturday by winning the women's 400m T11 final.

Having won four golds at the previous edition of the Games, Liu's appearance this year has been beset by difficulties.

After arriving home from the Tokyo Paralympics exhausted, Liu was barely able to train normally during her quarantine period. In addition, Xu is not totally recovered from a torn meniscus in his right knee, an injury he sustained just before the Tokyo Games.

In my opinion, (guide Xu) Donglin is my elder brother. I'd like to thank him for guiding me to the podium in major events since 2013.

When the duo entered the stadium on Saturday, Xu helped Liu to her starting position and gave her a reassuring pat on the shoulder just before the 400m race started.

Liu stormed out of the blocks to open an early gap, which no one was able to reel in before she crossed the finish line in 1 minute 1.21 seconds.

Liu began training seriously in athletics after her running talent was discovered in school.

Xu, 32, is a former professional athlete who was selected as Liu's guide in 2013 when he retired.

After years of practice sessions and competitions together, the duo are now perfectly in sync. Liu can sprint or turn left smoothly prompted by the signals sent by Xu through a thin rope that links them.

"In my opinion, Donglin is my elder brother. I'd like to thank him for guiding me to the podium in major events since 2013," Liu told Xinhua.

"We have cooperated for eight years and claimed many medals in national and international events. This has given me a sense of achievement," said Xu.

After the long and tough season, the golden pair will both enjoy a well-deserved break.

"We will part for several months. My knee injury needs time to recover. I'd like us to target even better performances at the 2024 Paris Paralympics," said Xu.